TKC QUESTION: MAGA 'GO BACK' MOVEMENT ALL GOOD IF WE CAN ALSO DEPORT BROKE-ASS WHISKEY TANGOS?!? 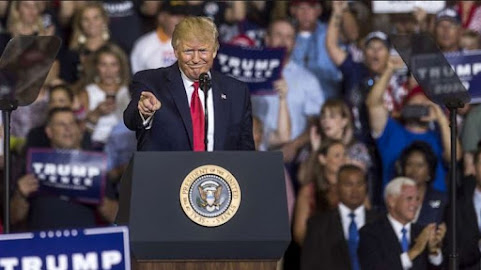 Whilst the current political epoch is mostly about playing the victim, our TKC blog community is eager to join the side of the bullies . . . Or whoever wins a fight, election or the stripper who proves victorious in a hot-oil-wrestling match.

If a bunch of plebs want to pretend they have something in common with a billionaire who owns hotels around the globe . . . That's their prerogative inasmuch as some people play pickleball which is also a waste of time.

Last night the MAGA rhetoric might have reached the tipping point as a crowd chanted for the deportation of a member of the U.S. Congress.

Fox: 'Send her back' chant at Trump rally prompts outcry

Again, we didn't get this far and become the only real news source in Kansas City by being judgemental. Chanting isn't my bag but YOU DO YOU!!!

For People Of Color In Kansas City, 'Go Back Where You Came From' Is A Familiar Refrain

Documenting the "go back" rhetoric is important and if we're honest it's a fake tough guy sentiment that has also been thrown at Jewish people, Italians and even the more authentic Irish -- All of whom are ethnic but don't enjoy the 'people of color' identity politics hall pass.

But rather than get into a snoozer-PBS-style diatribe on the American immigrant experience . . . Let's have some fun . . .

CAN WE DEPORT BROKE-ASS WHISKEY TANGOS IN ORDER TO MAKE AMERICA GREAT AGAIN?!?

- Walmart would be much nicer.

- Meth problem in Missouri disappears overnight when the WT population is moved to Tijuana.

- Guy Fieri would be forced to follow his patrons to Mexico.

- WT had their chance/privilege and all they could do with it is talk about opening a vape shop.

- The women under 255lbs can stay along with any WT dude under 30 without a neck tattoo because we believe in restorative justice.

Again, to be fair, we can't pretend to be offended or surprised by the MAGA "GO BACK" MOVEMENT because TKC has also heard the phrase last year and pretty consistently growing up. Full disclosure: Up until 2016, TKC also regularly yelled "GO BACK TO BUCKNER!" at equally rude drivers - We're not innocent in the decline of Western Civilization. However, fun fact: Bucker actually has one of the best pizza places in Jackson County. But I digress . . .

The point here is that telling people where to go feels wonderful but it's not classy, effective or a characteristic of truly great statesmanship. It's just an insult that any scumbag can repeat.

That is a FUNNY dumb-ass post. We'll miss you. Please write from TJ!

Ilhan Omar, the face of the New Democrats.

I have no problem with this at all, as long as I get to be the "Decider"!
Nothing else is acceptable.

How you treat the weak is Your true nature calling

Missouri without white trash wouldl be like a day without sunshine.

The Democrats have gone way far left. So far that questioning their patriotism is fair. MAGA

"It's just an insult that any scumbag can repeat"....and the scumbags on this blog repeat it ad infinitum ad litem.

@9:35AM they've gone no farther to the left than the repubturds have gone to the right. At this point, it's fair to call the right Nazi's now.

This Country has much Larger then a Billionaire tweeting CONGRESS SHOULD WORK together and solve the many problems we have in the U.S.A.

Typical selective outrage by liberals and the media. Where is the condemnation of Omar's anti-semitic tweets? They want everyone to forget about that.

^^Nonsense. She didn't say anything antisemitic. She criticized Pro-Israeli lobbyists.
Any criticism of Israel is spun as antisemitic even when it's not.

Typical Republican tactic, "Don't look at this, look at that over there."

Der Fuhrer's behavior is unacceptable. This is yet another impeachable offense.

trump and his minions. Hilarious. The worst people in the country. Deport them all!

This is fucking great. Trump is going to win 2020 in a landslide and it's so obvious because all the haters have is "well his crowd chanted stuff about an unpopular congresswoman so it's literally nazi germany"

Just like we lived in nazi germany from 2000-2008 under GW Bush. I don't give a shit about either party but they only people I've seen freaking out about it are the usual suspects who never had anything good to say about trump and those peddling clickbait

Ain't nobody tell me nothing said...

^^^^^ You might be more scared about how this looks than you're letting on. Or maybe you know it looks bad.

I ain't no hater.

Lucky for you The Squad is even more stupid.

Don't search for a good guy in this. There ain't one.

Trump is a degenerate unworthy of the office of president. His supporters are unworthy of citizenship in this country. They all need to go.

We've heard all these democrat talking points before. Heard them from 2000-2009. Heard them again in 2012 against Romney. Hearing them again now. It's meaningless statements by dems and the media at this point. More normal people are seeing the childish tantrums being thrown by the media and the left. Far less people trust the media than a year ago and even then it was already lost. They've become a joke to everyone

Good to see the MAGA white trash racists awoke before Noon. Get your Marlboro Lights, 2-liter of Mountain Dew, and broken-screened beater of a phone and sit down. Your days are numbered. Understand? Times are a changin’ and you ain’t part of the solution, Cletus. You never have contributed to anything but your miserable existence. How many divorces now? Mommy and Daddy didn’t love you enough? You and your deplorable ilk are slowly withering away. Take your last shred of decency and get the fuck out of OUR country now. Go. Git. Scram. Head on back across the pond or whatever shithole your grand-pappy was kicked out of back in the day.

Take your last bit of Trust Fund and find another place to live. This ain’t it.

And, 10:07, leftists and liberals are CRICKETS when it comes to Tlaib calling POTUS Trump a motherf*cker. Plus, Presley's racist remarks to "browns" and "blacks" about their "voices" and their "votes" is given a PASS.

^^Well Trump is a motherfucker so what's your point?

Hey, don’t forget about Wyandotte county white trash. Have you seen the WT around argentine? Good grief. The younger males are similar to the kind you see in independence. Shit trimmed beards with dirty wife beater, metal stud under their lip, dirty jeans, vocabulary of a complete idiot, angry drunk always getting into fights over nothing, garbage prison or homemade tattoos etc etc.

Oh, 12:49, Omar's brother @11:32 is going to be raging, again. He will take offense that you're dissing his white trash husband's Dotte family that you put in a post like that.

^^Huh?? Speak English geezer! You stroking out too???

Byron has told everyone on here for years now to leave and go back we have no right to be here.

We all have told him it is wrong to say so and he always comes back with the free speech rant while calling us NAZI's and racists.

But let our POTUS say something about going back and Byron is screaming impeachment and every other vile thing that come to his demented mind.

See what Byron thinks he in entitled to say about people is not affordable to anyone but him.

Are president is a stable genius with one of the smartest brains.

White Reps think they are feeling some sort of reverse racism because they are being called out. LOL

Oh, but we all know what's found in a stable @4::15, so stop calling Trump a Horseshit Genius, have you no respect?

I’ll be at President Trumps 2020 inauguration, i garauntee it! MAGA forevar!

At least today Trump stood up against his deplorable racist base and disavowed the anti-American chants from the angry mob. Even Trump now thinks his rally crowds are stupid bigots. He probably used his Jeff Sessions accent to make fun of the southerners again. We'll see how the supporters like that.

Finally, a very clear picture of your political leaning Tony.

I'm having a tough time finding a local blog in my home state of VA who gives a shit what I have to say.

" My father gave me a small loan of a million dollars."

Hey is Ilhan Omar still the face of your party? Cool!

See you at Trump's inauguration!

Trump rallies, killing two birds (the rally and a Klan convention) for 2 + years. I love watching Trump stand up there like Benito Mussolini. Warms my heart.

I like to here Trump talk. He's like the fourth grade school bully who was mentally handicapped, but could still beat you up.

How is it that the dems see MAGA as white trash ? The portrayals by the left- red neck trailer trash- might only represent 2% of the folks that actually went out and voted for Trump. The other 60% were the every day decent folk of the kind that Russia sent to the Gulags for 40 yrs. The first 15 years they were sent were followed by the same revolutionaries that sent them replacing them in the slave camps. Those folks kicked and screamed about how they were one of the "good guys", but may have come to realize their SJW nonsense meant they deserved slavery more than the people they helped send there. Schools don't teach this like they used too, and the Holy Bible does not elaborate much as far as arguing the politics. The Bible simply states as fact the folly of obsessing over social class as encompassing the sins of pride and envy, and that the poor will always be with us. Those that attempt a utopia will always reject God, because he does not fit into their vanities of changing the world without him. Trump is right, and seems to know that any discussion or attempt to reason with the constant complaining revolutionary means to legitimize their hitching and compromising with those bent on wickedness.

Hey Springheel Gods not real and the bible is a bunch of short stories to try to make people do the right or wrong thing. Trump has nothing to do with God. Greed and vanity is Trumps god, is that not obvious?