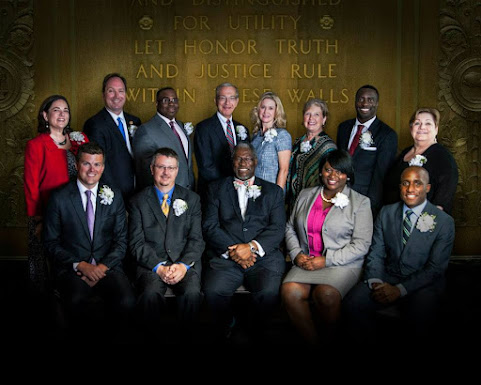 Kansas City is now confronted with the steepest tax increase in more than a generation but everybody on City Council has maintained radio silence whilst they prepare to push through a last minute agenda filled with massive spending, perks, giveaways, benefits and subsidy.

HOW CAN KANSAS CITY VOTERS TELL THEIR OUTGOING REPS TO AVOID ANOTHER LAST MINUTE SPENDING SPREE BEFORE THEIR TENURE EXPIRES?!?!

The City Hall website is undergoing renovation and 12th & Oak e-mail pleading has always been overrated.

Lobbying Mayor-Elect Quinton Lucas on social media is somewhat effective until voters get a freebie law lecture which eliminates their will to live. Still, Twitter & FB push back might be the best/only way to confront the lame duck Mayor & Council as next week this town considers a great many big ticket items including but not limited to:

- Airport Road Funding For MILLIONS Despite New KCI Promises That It Wouldn't Cost Taxpayers A Dime . . .

And so, the cash July cash fight continues with so may close watchers of KCMO politicos hoping this Mayor & Council won't max out this town's credit cards whilst walking out the door.

A quick Twitter guide for continued discussion about City Hall finances as the council prepares to start anew with a mountain of debt:

Not much accountability from council. Never has been, never will be.

Think about it from their view, they've to go out and get jobs or try and rebuild their political careers. They have two weeks to make up so very big favors. Mean tweets are fun but don't count on dissuading them.

Simple answer, - WE CAN'T!
When have this Mayor and these Councilmembers EVER listened to the residents?
The only question is how much spiteful damage will they cause to punish the people of Kansas City before they leave office?

"HOW CAN KANSAS CITY VOTERS TELL THEIR OUTGOING REPS TO AVOID ANOTHER LAST MINUTE SPENDING SPREE BEFORE THEIR TENURE EXPIRES?!?!"

We HAVE told them by voting city-wide against the streetcar whenever we get the chance. But we're only voters and taxpayers and can't compete with graft.

It's sad to see how little the KCMO electeds think of the city's residents, but the new crowd that those same voters just elected are cut from exactly the same cloth.
So waste money today or throw it away tomorrow.
It really doesn't make any difference.
And the goons "running" Jackson County aren't any different.
Wonder why there's ZERO interest by folks in other jurisdictions and in Johnson County for even thinking about bi-state ideas like stadium funding?
Just watch the show.
KCMO is a sucking chest wound on the metro.

The city council of Kansas City is a lot like that asshole Byron.

They care not what you think or want. They only care about what they want and will scam you to get it.

Plus, they're giving themselves a raise!

7:48 clowncil makes $63,000 a year with full benefits right now and they only work 4-5 months a year. How and why do these arrogant pompous assholes think they deserve a raise?

Good luck finding a solution to this problem/concern. SLie and the council are still upset the voters soundly rejected SLie's pre-K scam. They are looking for any way possible to stick it to the citizens/taxpayers/voters for this rebuke. The highly inflated real estate reassessment was one way of doing this.

6:00 nailed it. Indeed all we can do is watch for their reckless spending as they get closer to their expiration dates and then hope for cooler heads to prevail in the new administration.

Meanwhile POTUS is MAGA
Great June Jobs Report! We added a massive 224,000 jobs, unemployment rate is at 3.7% (lowest level since 1969), and wage growth over the last year was a solid 3.1%! KEEP AMERICA GREAT!

Yes, @9:21 it looks like the Obama Economic Recovery that started in 2010 is continuing into its ninth year!

8:30--
Perhaps you don't understand how taxes work. the county appraises, the county collects.

then subservient taxing authorities set mill levies, and tell the county how much to bill their minions.
eg city, school board, park boards, libraries.

KCMO is beyond broke. So they WILL keep their mill levy at the same level, to take advantage of this new county windfall. And sit like Cheshire cats during that meeting, because "their paws are tied!"

Sadly, this new tax windfall comes at a time when there is yet another bailout for bad behavior. It's like handing a bottle of Grey Goose to someone stumbling out of a 12 step AA meeting. This outgoing council is going on a big ole bender.

To feather their own nests, they will distribute the largesse to the big corps that financed their losing campaigns, and MIGHT just hire them.

Poor Jolie JustUs. Poor Sly James. There went their big dreams of going to WDC, the most feathered nest on the planet.

One more thing--absent a real newspaper, (not beholden to its advertisers to run double truck ads about nothing, just to pay for last quarter's ink bill) and absent TV stations that run stories longer than 45 seconds, I am grateful to TKC, the ONLY place that allows commentary. It's like the French resistance movement. Without the brie, alas. This war however is NOT over, and the Germans are looting the treasury.

The last minute spending spree is about out of office quid pro quos and/or kick backs. You can bet on it

This may be a little oversimplified but voters need to stop approving new taxes and fees.

The folks who lost their seats have zero accountability... and those who won are 4 years away from voter judgement. That's not a formula for restraint.

Even though I often disagree with her, I do appreciate Tracy T’s commentary here! Thanks TKC for keeping a space for folks to keep an eye on the pols.