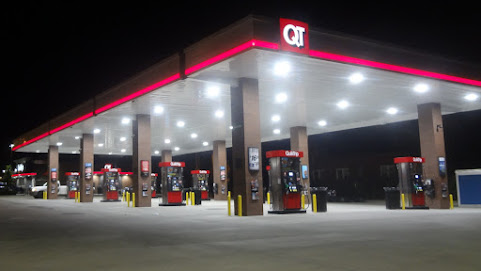 Over the weekend with absolutely no fanfare, the QT on Westport Rd. finally debuted its glorious 16-pump array of fueling options.

The high-sugar and high-carb options in the storefront opened a couple of weeks ago.

Midtown can finally see what the Mercier crosswalk monstrosity at this "re-imagined" Quiktrip looks like . . . 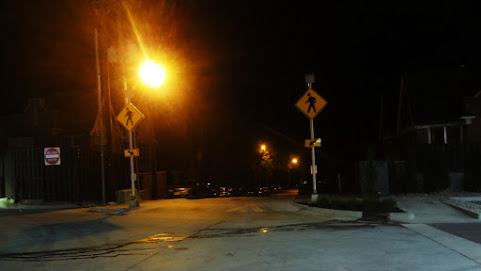 The reviews have been unkind so far . . .

Most people think it's a neighborhood killing abomination that'll create a sketchy high-traffic shortcut through a formerly peaceful row of apartments. To be fair, none of this will stop A VAST MULTITUDE of worker-bees from gassing up daily at this locale and scarfing down those horrific gas station hot dogs. 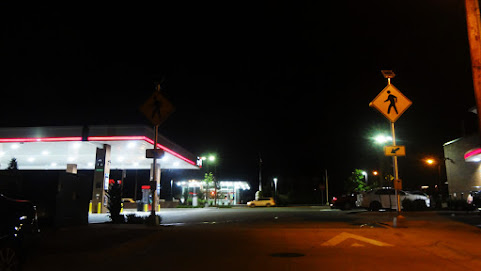 Postscript . . . This horrible design was opposed by nearly all of the neighbors but because the 4th District Council lady was running for mayor and she was a "leader" of the LGBT community, MSM was uncomfortable giving voice to complaints about her silence and lack of leadership despite community opposition. She inevitably lost the contest with little support from anyone but her close friends and a few union special interests. Today, even at 3AM this location was bustling and clearly meeting a hefty demand.

Now THAT is powerful ciphering Jethro.

Saw some posts about this on my socials but nobody bothered to get off their a$$ and show or explain the deal. Ya done good, boy!

A place for fags and drug dealers to congregate with good lighting 24/7.

That is what get for always voting democrat.

Very few people I would take sides with against QT. 4th District is just a bunch of crybabies. The QT was already there

They say they hate it but it will always be super busy.

As Yogi Berra said, "Nobody goes there anymore, it's too crowded."

Just a matter of time till shoot outs and all the other lowest common denominator crap starts happening at this "A Lil' Taste of Okie" wonder of the world.

Who gives a fuck about Westport. If you live there you are 1...a transient who in the next five years will be married and living in Johnson County or 2...a loser who will always vote for people like Sly James and never leave the neighborhood (unless KC water bills make it so costly to live there that you cannot).

Tony, Tony, Tony:
Your Mom and I agree, nothing good ever happens at 3am. Stop driving around! We need you.

It's far cheaper to gas up at Costco on Linwood. during the day. And safer. And with the Costco Visa card, you save an addl. 4% /rebate.

As for Jolie JustUS, you reap what you sow. Her deaf ears on supporting her district were legendary. Her defeat started there...hope she took enough money from corporate donors to provide some new contracts to support herself.

Her day job has been handling pro bono cases for her big law firm, while she served in Mo. state senate and then as councilwoman and then running for mayor. But what good is she to them now that she is out of office?

Does anyone expect that a Joe Biden or Kamala Harris would find a place for her big red tent of a blazer in their cabinet--under the big tent of the Democrat party?

Even Mayor Pete would have little use for Non-Mayor Jolie.

Maybe she and Sly can form a super-minority contracting firm, women, gays and blacks--to handle PR for the New KCI in its first and only 9 years, before Southwest pulls funding, as promised in their contract.

Cuz when the lights go out at KCI, flyover pilots will only have the bright lights of QuikTrip in Westport for navigation...

I'm one of the few that likes the new quiktrip. I've lived in midtown/westport my whole life and that corner at roanoke and westport road has been vacant for the last decade with some old gas station that hadn't been opened since the 90s. People in the neighborhood are just so used to it being vacant that they'd bitch about anything being built there. It's prime commercial real estate and something was going to be built there and cause extra traffic. Plus the QT predates most of the people living around. I'm glad the least convenient QT is not easier to navigate

^^^ Once again nothing but hate and asshole comments coming from you. You just go post to post saying your same old bullshit everyday.

@11:46AM: You new here? There is nothing but hate and asshole comments from EVERYONE on this blog. The same shitty posters just go post to post saying their same old bullshit everyday. Get real dummy.

^^^Wow. Who pissed in your Cocoa Puffs?

Retreat to your safe space.

^^^ no, it’s mostly your hate everyday, the rest of us tell the truth and you can’t handle the truth so.....

^^Nobody cares dork...why do you spend so much time on here? How come you have no life?

^^Yes! Also, why do we have to put up with crap like stupid dave?

Special thanks to Tony for this blog.

If geezer hater lives long enough, he may get old as well.

^^Yes! Thanks Tony! Thanks for giving the geriatrics like Stupid Dave, chuckie cheese, and Tracy something to do all day as they wait to pass on. Thank you for keeping them off the streets where they would just fuck up everything!