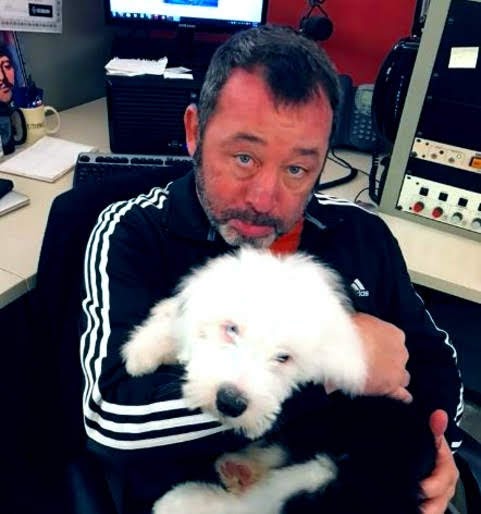 Once again, Prez Trump is embroiled in a controversy over alleged racism and his social media presence . . .

Here's a quick summary, further reading and a view from "many sides" of this controversy . . .

AP News: Trump digs in on racist tweets: ‘Many people agree with me’

New Yorker: Trump’s Overt Racism Is Uniting Democrats and Unnerving Some Republicans

Now let's bring this debate back to the Kansas City discourse . . .

MORE THAN ANY OTHER LOCAL BROADCASTER, KMBZ TALKER SCOTT PARKS DENOUNCES THE PREZ FOR ALLEGED RACISM!!!

The promise, proof and the position statement of Mr. Parks . . .

@ParksKMBZ: "Let us be very clear. The President of the United States is a racist. Anyone who doesn’t call him out is a coward. I’m a Republican."

Admittedly, the criticism of Mr. Parks stands out beyond the typical progressive tripe given that he touts his GOP credentials. Not so long ago, he consistently espoused far more Conservative ideals via his platform. But that was about 7 years ago when people still listened to local talk radio.

Since around the time of the inauguration, Scott Parks and co-host Dana Wright have dedicated a great deal of their show to criticism of Prez Trump . . . During that same time, more listeners have abandoned broadcast radio and turned to streaming, satellite and podcast options for audio.

IS SCOTT PARKS ON POINT WITH HIS ANGER AGAINST PREZ TRUMP?!?! OR IS HIS POLITICAL CRITICISM MERELY AN ATTEMPT TO LURE BACK LISTENERS?!?

I think Parks is just saying what a lot of people think. The President was off the mark with his tweets. He should apologize and move on.

On this one, have to agree with Scott. He's taking a risk and doing the right thing!

Parks and his tweets are much more popular than his show.

Trump is absolutely correct, a lot of people do agree with him but they aren't the leader of the free world and hold the most powerful office in the nation. I don't listen to Parks but I follow him on social media and I think his current stance against the President is 100% correct. Glad someone from the establishment media is speaking up!

Trump is telling like it is. The squad is made up of socialist traitors...somebody had to say it and only Trump had the balls. PARKS is A TRAITOR too if he denies it!

First time I ever listened to Parks was today. Might start listening to his how now. I think he is gaining a lot of fans because he's not afraid of the President and is staying true to his ideals.

Parks is an oozing pus-infested pussy. Trump is 100% right.

Parks is #1 in his time slot. Trump is a one term president at best.

DJ...at KMBC....?! Guy looks like an old drunk. The point Trump is making is that you have ZERO RIGHT to TEAR DOWN something that YOU DID NOT BUILD. NONE of these MORONS nor their extended families have contributed anything to this GREAT Country. The MAJORITY OF AMERICANS AGREE WITH TRUMP though maybe not with the crude way he says it. (He NEVER claimed to be a SLICK POLITICIAN. You know like Obama talking....all silly and sweet while systematically dismantling our Country.) These 4 rats have slithered through a hole into Congress and now intend to EAT IT from the inside out....

Parks will be on radio or working in KC media a lot longer than Trump will be in office. Count on it!

^^@8:51 Speaking as a Vet, I'd recommend that you be careful how you sling the word Traitor around, Pal!

There are a lot of us out here who took an oath to defend this Country "against all enemies, foreign AND DOMESTIC"!

Because, uh, Scottydog Barks has to work for a living!

So, Trump goes 2 terms, then gets to golf all he wants and spoil grandkids alot. Plus, DJT will be getting even much wealthier from more book deals like past presidents have. He'll rake in yuuuuuge money for events at his resorts and hotels.

Who is Scott parks? Exactly.

Your gay grandson loves you said...

Shut up tough guy grandpa. NI applesauce for you if you don't play nice and stop making threats.

^^^^This is what happens when life passes you by.

Ask your mother if you don't know Scott Parks. She wants him inside her. Sorry ladies, he is taken!

^^^ and yet you’re absolutely wrong on everything. Weird.

It's a shame to see so many of you get your panties in a bunch over something that some guy says on the radio. I say that Parks is absolutely correct. Oh I don't agree with his politics I agree with his strategy. Love him or hate him the president gets people's attention. If you don't like him then you keep listening because you want to defend them or want to find faults in Park's argument. If you hate them then you want to hear the guy talk trash about him. Either way the most important thing is that people keep listening. And it's obvious that is the case.

Trump was raised a racist, was mentored by a racist (see Roy Cohn), has always been a racist, is a racist and will always be a racist.

Sad to see so many Republicans agree with him.

I refuse to call that lowlife by that fake name Chelsea. Bradley NOT MANLY Manning is a TRAITOROUS gender-bender buttBOI degenerate!!!

^^^ And yet, you're absolutely WEIRD! ALWAYS. WEIRD.

Parks is a loser. Everyone with any talent is gone from that station.

Queer Eye Sucks More! (But, not as much as Will and Grace) said...

Hey, homos and the rest of the LGBTQ alphabet soup are just giddy it's a slapfight about racial stuff and not sexual identities for a change!!!

he sexy, gonna listen ebry day from now on.

9:18...you are no vet. PARKS is a traitor if he defends commie traitors... and looks like an old drunk. A lot of vets are losers, too. What's so special about signing up in endless wars to kill on government command?

So I say unto you, this man who holds a puppy so gently who Strokes the hairs and pets the thatch so nice me what could be wrong with him? I say nothing! let this doosh speak his peace!

The man is effective in tying your titties into a twister and that is what should be savored. Yum. Once again you b****** have turned our nation's discussion into a travesty. That is the transvestigation of our democracy how f****** dare you. We need to get together to Get Some Lovin and some hugging and some humping and y'all need to chill.

Real Vets don't announce their credentials online just because they are mad. You lose at life.

TOP PHOTO -- GOING TO THE DOGS

The Squad are elected representatives of their constituents occupying a co-equal branch of government.

They are not Anti-America, nor do they hate America. That is just hysterical garbage.

An elected member of the House of Representatives should not have their patriotism questioned by anyone, particularly because of their race, sex or religion.

Especially a President who The Constitution demands be impeached.

So much for principled positions, improving healthcare, and pushing for higher wages. All they have now are slurs, insults and threats.

Hillary was right. The vast majority in the GOP today are deplorable racists. Swing voters won't be fooled in 2020 by these bigots. A Tsunami sized blue wave is coming.

1:52, by her own admission Cortez is, in fact, a socialist. Given control, they will take everything you have, and give you a pittance for it. You really believe for example that they will give you free health care that is more than third rate? Don't be a fool...look at what Socialists did to Venzuela in less than a dozen years.

The socialist cries were used against Obama and Clinton too. Hell, Reagan even used it in the 1960s to describe Medicare. Stop crying wolf about socialism. It's old, tired and wrong.

Cortez identifies with policies of Social Democrats, policies that work well in many European countries like Sweden, Denmark, and Norway - all with better health care coverage and results (with much lower costs) than the US. She wants that because she deeply loves America and cares for people, not to destroy America.

Venezuela is not Socialist. They claim to be a federal presidential republic, but has been run for 20 years by 2 corrupt strong men who started as populists, Chavez and Maduro. However, they not only have stolen elections, but skimmed billions from the treasury for their families and political allies. When you think about it, Venezuela in practice much more resembles Trump's government than Socialism.

Seriously, Venezuela has failed because of rampant corruption, the oil market collapse during the great recession, and harsh US economic sanctions. Not because it implemented an AOC version of European Democratic Socialism. Heed your own advice and don't be a fool.

Trump is right again. Nothing racist about calling the squad socialist. Their kneejerk response of crying racist is old n worn out.

Whatever you think of Agent Orange, he knows who his base is, and he knows how to speak to them.

A pinko is a pinko and Scott and the girls are pinkos.

Damn were it not for TKC, who would even know this JOKER parks was still around?

Now that Soren Petro is on 810 from 2 to 6, I don't have to listen to Dana and Parks anymore. They should dump both of them and make it the Michael Mackie Show. He's more entertaining than either of them.

Hey Byron. Read Trumps tweets about those women and tell us all how he questioned their patriotism because of their race, sex, or religion? There was nothing of the sort in those tweets. You're just reading your ugly bias into this just like you do every other topic. God, you're a disgusting human being.
See how I did that?

^^^^And yet Trump's comments had more dog whistles than you'd find at Petsmart. Weird.

Great,so we can listen to Mackie talk about all the cock he took last weekend at Hamburger Dana's

Scott, you fucking dolt. You weren't such a fucking pussy when you were on the drink.

News flash. In 2019 you can't criticize anyone who is not white w/o being called a racist.

"Go back to your country" is one of the oldest racist attacks in this country.

Using a racist insult makes you a racist. Don't play dumb, unless you really are that stupid.

If you really don't get that, then you forfeit the right to connect dots criticizing US / Israel foreign policy being about the Benjamins as anti-Semitic. It's called a trope.

Scott Parks is a douche! Hes a so called ex drunk, but looks drunk as fuck holing that dog. Hes younger than me but looks twice my age, when he yaps I just change the channel 98.1 needs to find a real talk show host and get rid of his rediculious ass!!!

11:10 thats because a ton of VETS are on the corner holding a carboard sign and dont have the internet you ungratful MOTHER FUCKER!!!! - Semper Fi BITCH!!

8:05 Requests a response from ungratful civilian 11:10! My PTSD is waiting for your answer.

That dog does appear to be "aggrieved"