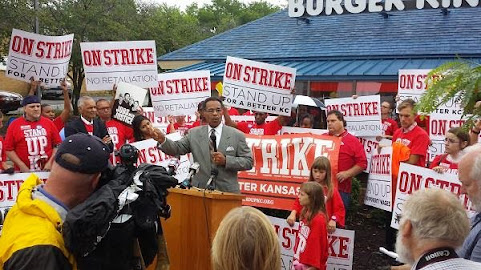 Kansas City, Missouri Representative Emmanuel Cleaver II has been a longtime supporter of the movement to raise the minimum wage since he spoke at the "Fight for $15" kick-off rally in front of Burger King so many years ago.

Locally, many biz leaders have voiced their opposition to the movement and threaten that the effort will actually hurt employment and the workers it seeks to help.

In the meantime and apropos for the start of payday . . . Here's a look at the statement from Kansas City's highest ranking elected official followed by more info from "many sides" of the issue:

(Washington, D.C.) – Congressman Emanuel Cleaver, II (D-MO) voted in favor of H.R. 582, the Raise The Wage Act, a landmark bill to gradually increase the federal minimum wage to $15 over six years. According to analysis from the Economic Policy Institute, the bill would increase pay for up to 33 million Americans, including nearly 124,900 workers in the Fifth District of Missouri who would receive, on average, an additional $2,000 per year. The bill was passed by a vote of 231-199 and will now go to the Senate.

“Today is a great day for millions of American workers who have spent years working hard, playing by the rules, and trying to provide for their families on a wage that is simply unsustainable,” said Congressman Cleaver. “It is because of these workers and their fight for the dignity of a livable wage that we have reached this moment, and I couldn’t be more proud to support these workers in their quest for what is right and just.”

The federal minimum wage was last increased a decade ago in 2009—the longest stretch in history. Since that time, low-wage workers have suffered a 17 percent pay cut due to inflation. There is no county in America where a full-time worker making the federal minimum wage can afford the basic necessities for themselves and their families. According to the Congressional Budget Office’s review of a similar proposal, raising the minimum wage would lift 1.3 million Americans out of poverty, including 600,000 children. The bill would also be a significant achievement for narrowing the gender wage gap that disproportionately impacts women of color, giving nearly 20 million working women a raise that they have earned and deserve.

Congressman Cleaver also recognizes the unique situation that individuals with disabilities and small business owners in rural areas face. He will continue to push for ways to assist rural areas and make improvements to Social Security Disability (SSDI) in order to avoid any unintended consequences to individuals receiving SSDI benefits.

“While this is a monumental moment for hard-working men and women across the nation, the fight is not over. These giant corporations will not give in easily,” Congressman Cleaver said. “They have the money and the power, but we have the people and the passion for justice. As long as we stand together, united against inequality and oppressive wages, I have no doubt we will win the fight for 15.”
##########

Biz Insider: A huge majority of Americans want a $15 minimum wage, but they waver after hearing its economic impact

It already has led to fewer jobs for people. Small business is hurt the most. It sounds good on paper but the costs are going to be handed directly to the last remaining mom & pop shops and consumers, of course.

Free money for the masses. That's what wins elections!

^^^ Actually, $15 is now standard. We need to start thinking about a $20 minimum wage. That is the only truly living wage.

^^^you're retard to think such

This is all a ploy to get the people back behind them again after their ignorant games this week. Plus the point most don't see or pay attention to is that it is to take place over the next 6 years. So it isn't a boom here's $15 an hour

Personally I'd like to see the minimum wage issue thrown out the window and let the individual businesses deal with it. Most will pay more than the minimum if that's what it takes while some will pay the lower wage because they can get away with it. Take the minimum figure out of the equation and you will either pay people according or the guy down the street will pay more and take your good help away from you.

When unemployment rises and we're paying higher prices for everything because of the higher minimum wage, remember to blame Cleaver and all the politicians who voted for it.

The CBO has already said millions of people will lose their jobs due to the higher minimum wage and companies will pass those costs on to consumers with higher prices so you can thank liberals for future high prices and high unemployment.

And @7:56, a week ago you were crowing about the tremendous number of jobs your president* has created! What do you mean "this has already cost jobs"? Aren't we in the "strongest Economy in History"?

You followers of the Trump Cult need to get on the same page with your horseshit lies.

You're funny when your head is exploding.

Hey speaking of alienating people, how's having the racist Ilhan Omar as the face of your party working out?

^^It's working out really, really, well! America is getting to see just how hateful, sick, & ignorant Trump & his minions really are. Please keep inciting the hate. The majority of true American's are sickened by your racist hate. Thanks for ensuring a blue tsunami in 2020!

Now you can start ranting how president* Footnote has done so much!

Congressman Carwash cares so much about working Americans that he defaulted on a personally guaranteed SBA loan.

When Bank of America sued him, after years of giving him chances, the judge ruled against Congressman and Ms. Carwash.

^^and yet he's in Congress and you're here bitching. Weird.

^^And your stupid and here proving it. Weird

^^and you're here reacting to someone who does this better than you, thereby rendering yourself irrelevant. Weird.

8:56 you can't even read correctly so making comments about someone getting the fuck knocked out is rather silly when one can see you knocked yourself the fuck out.

Muzzie Marriage Fraudster From Mogadishu Is Getting Sent Back! said...

^^THAT is Omar @8:30, screeching a bunch of bullshit through a bullhorn. SHE alienated all decent people who aren't US haters, Jew-haters, tax-cheats, immigration fraudsters who marry their blood relatives, and terrorist loving al Qaeda supporters.

^^You sound really, really, old. Not to mention bitter, broken, & hateful. Work on yourself some. Maybe spend less time getting upset at what you see on the TV. OK snowflake? If you weren't such an asshole, maybe you would have some other people to talk to. You should try that before you shuffle off to hell. You don't have much time left.

Well hate is a funny thing, isn't it? You don't seem to mind when it's Omar or Farrakhan. Oh well, I didn't expect a prog/lib to have a consistent position anyway.

By the way, it worked out really well last time, insulting everyone who disagrees with you. Hillary strategy ftw!! :)

Hey it's the blog punching bag back for more!

Not even a challenge to a beginner, but you are always here to be knocked out. Thanks for your service!

Bought Off Bernie and the Bronx Bartender Drank Too Much Toilet Water said...

Bernie is a hypocrite bullshitter! He's been talking $15 for a minimum wage for years, and doesn't pay most of his campaign's field personnel $15. He bragged that he's the first candidate to have unionized 2020 campaign workers. Those members of the United Food and Commercial Workers International Union--Local 400, are demanding Bernie pay the $15, and that better working conditions are provided.

Same as AOC's hypocrite hot-air blowing that she's a proponent of campaign finance reform. And, she's under investigation for doing the dirty deeds she claims to despise, like the dark money she's funneling into her chief of staff, Saikat Chakrabarti's LLCs. Chakrabarti is a former manager of Bernie's 2016 campaign....which was BOUGHT OUT BY CROOKED LIAR HILLY!!!

Before Crazy Bernie Sanders and Blind Ass Dumb Cleaver advocate for $15-an-hour minimum wage, they should probably check and see if all their staff and employees are getting paid that much per hour!


Well of course he is and he will also kill small business and raise the cost of both small and big business prices. This guy has no brains just like you idiots who keep voting to pay more.

@10:17 Hey geezer, Hillary hasn't ran for anything in over three years. The current year is 2019 not 2016! Your dementia has taken over. If you can't get current, maybe speak to your doctor about a DNR? You seem to be losing touch with reality and at this point pops, it's probably time to check out.

Until the congressman stands with Bernie Sanders' staff members and demands a $15 wage for that collection of misfit toys, it's all talk.

This should be a state or local issue and not a national issue. New York City is not Topeka. The same level mandatory minimum in both places makes no sense.

@10:27 Hey gayzer, nobody cares that you're drinking toilet water in that Barry BathHouse, like your heroes--that brainless Bronx bartender and Bought Off Bernie.

You're a typical "Live In The Now" idiot. You're such a simp, you can only focus on the "current" episodes of Queer Eye, and the bunch of buttboiz doing your brown-eye.

Cleaver is another embarrassment from congress.

@ 10:27 - Here is a correction to your statement....Hillary hasn't really ran for anything since her last Senate campaign. She figured that she already had bought the presidency.

Now get out of mommy's basement because she wants to know if you want a BP&J today again like yesterday.

The little know fact of this $15 an hour minimum wage is these losers will no longer be able to get free gubmint money, plus they get taxed so it could be looked at as a win for the taxpayers, bet these fools didn’t count on that did they.

^^Hey look...Matlock's on pops! You love the Matlock!

11:50: Are you aware that separation of powers refers to the legislative, executive and judicial branches? The House and the Senate are both part of the legislative branch, so they don't have to amputate each other.

Are you Enjoying the show. There will be infatuation anyway .This Bill will not pass the Senate. If you are in a low wage job. Find one you can support you and your family .I have never cared Who the President is Because I take care of Business and stay out of debt. You have to be a dozen steps ahead of Banks and Big Government. Now I am concerned about the next President, You have Communists in Congress .And if Trump looses .The economy will decline much faster and These Conservative Business Owners will lay people off in a KANSAS CITY SECOND. AND RUMOR HAS IT MRS.OBAMA WILL BE THE DEMOCRATIC FRONT RUNNER.SLEEPY JO,DON'T KNOW.

^^^^^Did someone let you our of your room at the memory care facility?

8:30, Trump Cult?...hmmm, and what do you call your squad of the 4 females who respresent more of a cult than I have seen in 30 years of being a voter! You DEMONcrats are the definition of what a cult stands for, so go fuck yourself, more so get all your DEMONcrat buddies , invite your liberal friends and make a joneboro part duce!

What a joke. Cleaver photographed in front of a Burger King as he pretends to represent the working class. This relationship between Burger King and Cleaver, since 2002, has fostered the proliferation of crummy food options and worse job conditions in KC's 3rd District & black neighborhoods. "in 2002 Cleaver began serving on the Diversity Action Council, an advisory board to Burger King Corp. that helps the company develop relationships with ethnic businesses." $$$ for my campaign, diabetes for my constituents.