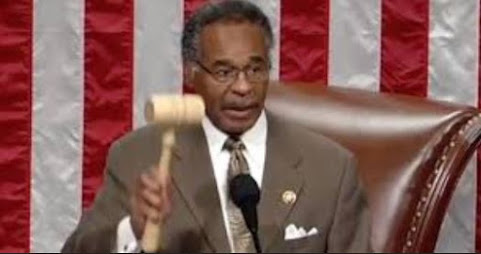 Another statement from Kansas City's top ranking politico on his choice to walk rather than endure rancor on the House floor amid an increasingly divisive discourse . . .

"Rep. Emanuel Cleaver (D-MO) tells CNN's Alisyn Camerota he walked out of the bitter House debate about a formal rebuke to President Trump's tweets because it was embarrassing."

Give Cleaver the exception the Democrats demand. He's black.

It was embarrassing. If you watch it, it's clear that doddering Pelosi was willing to break House rules to throw in a virtue signal in a desperate attempt to keep the party under control. She got called out for doing so, at which point Cleaver had a moment of transient responsibility that he fumbled badly. No surprise.

The fact that Cleaver is the "top-ranking politico" in KCMO pretty much says all you need to know about the state of the Missouri side of the metro.
Sadly, the standards for politicos goes downhill fast from there.
Exhibits A and B?
Sly and Frank White.

Cleaver seeking attention and nothing more.

Cleaver should be embarrassed about not paying back his failed carwash loan.

Oh don't you know Byron is in full fledge meltdown? Another star on Byron's "I Lie & Don't Know Shit" plaque.


Cleaver walked out because he's lazy and and stupid. He needed to get home to collect all of his tax free money from the car wash. I'M EMBARRASSED BY CLEAVER!

Congressman Carwash abandoned the gavel because he didn't know what to do procedurally, and wanted "somebody to do something!"

Like a derelict Captain who abandons the ship, leaving passengers and crew to fend for themselves.

Notice how Carwash kept repeatedly coming back to blame President Trump and House Republicans? Like they were the ones who forced Nancy Pelosi to violate House rules on decorum.

Surprised Carwash didn't accuse Republicans of spitting on him! And I'm sure it was somehow Republicans who caused him to never pay back the SBA loan which he defaulted on, even after a judge ruled against him.

Carwash and P'Lousy are geezers. They stutter too much. Yesterday, she let her mouth get too bold. And, he let himself be "throwed". But, too bad Cleave didn't hop around and holler like he did for his "She (Hilly) won't be throwed" preacher performance. His stiff arm thrusts timed to match his stomps and jumps everytime he bellowed out "throwed" was HILARIOUS!!!!!!

^^Then you must really love cadet bonespurs! He of the bestest big brain. The thrower of hamberder parties and covefee. That Puerto Rico is an island surround by water, big water. Who knew! Hilarious!!!!

It has to be embarrassing for any Republican who still thinks of themselves as an American to watch a GOP Congressman defend the president*'s racism and impulsive behavior.

No, it's far more entertaining to watch him effortlessly expose the structural chaos of the Democratic party and their utter hypocrisy on the issue of racism. Not to mention their total lack of attention to bread and butter issues.

This is what Happens when Socialist and Communists take over Congress. This is how Donald will win in 2020 He will say there are Communists in Congress ENJOY THE SHOW ...

Sir cleaver does it again

8:13 That does not forever end the discussion.

I have never lied on this blog, liar, nor is my head exploding, or am I having a meltdown. You thought of me at 8:13 in the morning? You lose.


The Constitution demands that Der Fuhrer be impeached.

Der fuhrer funkmyass has spoken! Jesus bLIEron you really are that stupid, how can you live with all that garbage floating around in that empty head of yours? I mean it would kill a normal person to think such crazy thoughts, seriously, seek help I implore you.

^^same way you do geezer.

10:23 it also states that people like who who commit treason be put to death.

^^^^Damn he has you there Byron
the crime of betraying one's country, especially by attempting to kill the sovereign or overthrow the government.

"I have never lied on this blog...." You have been factually wrong many, many times on this blog, and that has often been noted by subsequent commenters. If those were not lies, it's only because you do not know enough to tell true from false.

Jackson County Democrats raised your property taxes by $500 or more per household per year. If Democrats win the Presidency they will reverse the Trump initiated income tax reductions for all Americans that saved citizens hundreds of dollars in thei payvhecks. The Democrats fought the income tax reductions. Democrats want all your earnings and control your thoughts and free speech.

Today's Democrats equal Communism. JFK and Harry Truman would be embarrassed to be Democrats these days.

Liberal faculty will not allow conservative speakers on their campuses. If a conservative tries to speaks said communist faculty organize student protests. No free speech on college campuses. Very ironic. Eliminate tenure, high salaries, and exhorbinant pensions for faculty and then they may see through the lens of working men and women.

CNN's Anderson Cooper is a member of the Vanderbilt. He is filthy rich. His inherited wealth can be traced to the labors of Irish and Italian immigrants paid slabe wages to build railroads and canals for the Vanderbilt conglomerate. Immigarnts died by the hundreds and lives in slum tenemants because of the Vanderbilts and Rockefellers. Child labor laws and safe working conditions were legislated to protect workers from Anderson Coopers relatives that led to his personal wealth. Cooper is a hypocrite.

Why in the left-handed FUCK would you even let that ignorant groid preside over anything other than a pile of steaming dog shit!? Of course hes gonna fuck it up!

Go fuck yourself with barbed wire, you lying faggot.

856am, you are correct. Uncle Manny’s “won’t be throwed” routine was comic gold. Like some bad Richard Pryor skit. Those crazy darkies.