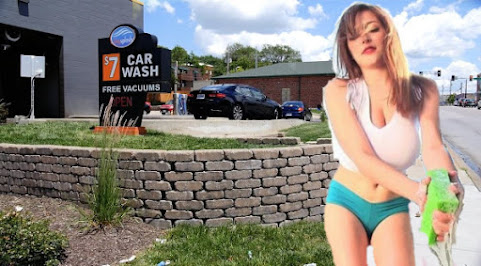 Using the dorky bad photoshop of hottie Tessa because nobody was hurt . . .

More to the point . . . Our TKC blog community wanted to know about this one so we asked and here's what we found out . . .

THE SUNDAY WESTPORT CAR WASH SHOOTOUT WAS THE RESULT OF SUSPECTED DOMESTIC DRAMA!!!

A male shot at a vehicle in the line of the car wash that was occupied by a female.

The vehicle was struck and damaged but no people were struck by the gunfire. There was also some damage to other vehicles and the building/car wash.

The male and female are ex boyfriend/girlfriend

The case is being investigated by domestic violence detectives as a DOMESTIC VIOLENCE aggravated assault.
##########

First time a shooting has happened west of troost that I can remember...but nobody was injured so maybe it's not that big of a deal

That's about the dumbest thing I heard today.

Media only covers homicides anymore. This wasn't a homicide.

This had my entire neighborhood locked in houses and apartments on Sunday afternoon. Was sad that it didn't make the new so at least we could have known what was going on and if there was any more danger. Thank you for the reporting, Tk.

Where ever Negros live there will be shootings and killings, KCMO residents should DEMAND the local government to put up a online map of where every homicide in this city happens so newbies moving into this shit town know where NOT to live.

^^^^ Hey Jesus you know all, so you should instruct all the "newbies moving into the city to live outside the city, and also Instruct the law abiding citizens who live in KCMO to move out of the city! Wasnt it you Jesus who said "Give a man a fish and you feed him for a day, teach a man to fish and you feed him for a life time" so why is it KCMO is filled with such stupid people who dont get that concept??? Pastors on this blog please answer the question!