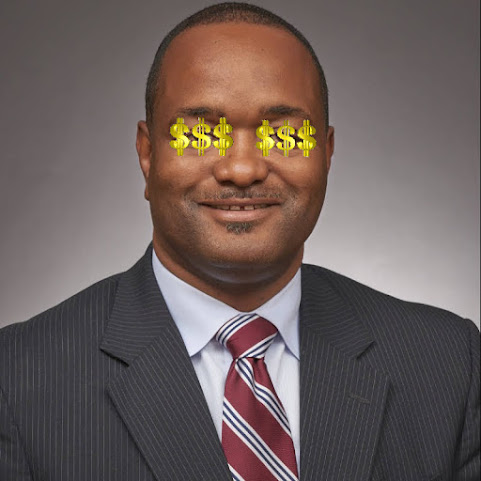 The morning after, the expensive departure of a school leader has a great many Lee's Summit voters fuming and asking tough questions of their school leaders. Sadly, there are no answers coming.

SPECIAL THANKS TO AWESOME TKC TIPSTERS!!! HERE'S AN INSIDER LOOK AT PR DIRECTIVES DEMANDING SILENCE FROM LEE'S SUMMIT SCHOOL OFFICIALS IN THE AFTERMATH OF THIS BIG MONEY DEAL!!!

We've highlighted the relevant passage . . . And leave you with this thought . . .

In the end, neither proponents nor detractors of the Dr. Carpenter are pleased with this outcome as the end result of so much racial drama is nothing more than a big payout which kinda makes so much vicious debate about "equity" seem like nothing more than a distraction.

And so, here's the directive which reminds us that all sketchy deals with taxpayer cash are always committed in silence . . .

The Board of Education of the Lee’s Summit R-7 School District and Dr. Dennis Carpenter have entered into an agreement in principle under which Dr. Carpenter has resigned as the District’s Superintendent of Schools.

The agreement was reached after a mediation conducted by Kansas City attorney Rik Siro. Under the agreement, the District will pay Dr. Carpenter a total of $750,000. A portion of this payment is being funded by the District’s insurance carrier.

With this, the Board of Education wants to emphasize that it remains committed to the work of our approved equity plan and the components of the plan.

Lastly, we acknowledge that the last several months have been difficult with a range of emotions involved, but we know we are up for the challenge before us to push into the future together. Our responsibility to forge our path forward is an honor. And it’s one that holds the highest importance because it’s for all the students and families we serve.
###########

add a few more dollar signs. The guy played everybody. Some of the comment last night were rough but nothing compared to how bad people are talking about this one in their homes.

Gotta admire the guy's hustle. Watch the next town he hits fall for the same line.

Thinking back over the years what KCMO paid out to departing school "leaders', this superintendent thing sounds like a sweet deal. If your black you can play the race card and double your payout.

^^Don't hate loser, just because he's rich and you'll never be, that's no reason to hate the game tard. maybe you should have made something of your life instead of ending up here everyday of your worthless life. It's your fault you suck!

It's beyond "the race card." This is ingrained behavior. One of things that used to annoy me and motivate me to start researching negroes was how they always cry "racism!" at very turn, when the policies of America are quite the opposite - we lend many "helping hands" to these degenerate apes at every step of their ignorant and coddled lives. So what's with all the cries of "das be rassus un sheet"?

I eventually realized why they cry "racism!" at every fuckin' turn - IT'S ALL THEY HAVE.

They only have "das rassus!".

Negroes play the race card because it's the only card they have. Being devoid of normal human skills and abilities, it's the only force they can use to try and get what they want.

So nowadays when I hear some nogs ooking and eeking about racism I know they are just trying to get some more "gibs".

^^^ You left out Self Respect.

They shoulda just fired his miserable, lazy black ass for cause, this is Missouri.

Then, once a week, have a black car salesman show up in an orange suit from Penners in an Escalade and take the moron for a test drive.

Two months in, he would have taken gift certificates for fine ass looking threads and a new sled with no insurance.

This is the second time he's pulled off this kind of thing. There was another district he worked and the same thing pretty much happened and he walked with a hefty payout.

The idiots who hired this idiot and need to be sent on down the road as well.


Hey Lee's Summit how much money are you into now? This is your second pay off and your up to something like 1.2M . Are you ever going to learn??? My thoughts are no. IDIOTS

Your property taxes are going up. Got to pay for diversity.

This will keep happening in LS. He wasn't fired do to the diversity issue. You have a large suburb that grew really fast and now everyone thinks they know what is best. They fired the last one and some people were pissed he got fired so they never were going to support the next superintendent no matter who it was. Same thing for the next one, The people that liked Dr. Carpenter won't support the next one, etc, etc.

The real loser in this is Joe Taxpayer who is on the hook for 1.2 million from the last 2 buyouts.

Should have just fired him when he was giving the middle figure publicly on social media, but white guilt won out as it has been lately and ever so slowly eroding the suburbs

Many Lee's Summit male administrators/board members took the corrupt Masonic Moron oath. They thought they were 'enlightened' and in the 'club' BUT they were idiots incapable of thinking for themselves!!

He got his reparations. Fuck the rest of you subhuman. White guilt pays the bills, don't you all feel better. Some day you won't and the south will rise again.

^^OK pappy..you've been warned about getting on the interwebs and acting a fool. No more Day Room privileges for you! No applesauce, no Matlock either! Go go get your diaper changed. You reek!

Hopefully this is a career ender for this individual.

I would never carelessly accuse someone of racism, but one look at his Instagram changed that for me, IMHO.

Do your due diligence next time, Lees Summit School District.

You shoulda saw this one coming.

If this had been a white man he would have been fired and lucky to have got maybe one months salary as a parting gift. That Siro dude is California educated so that also explains a lot about the high pay off.

5 Questions to Dr Carpenters next employer... assuming he can find someone to hire him ( no way ANY school in America will):

1. Did you unite or divide the Lees Summit kids, parents and citizens?
2. Did you do anything you are ashamed of? (Think hard about the middle finger you gave the teachers in your pic)
3. Did you let your “Trump Syndrome” get the best of you and get political and hide behind your hatred towards America’s president?
4. Did you show kids how to hate by blasting an American president and thereby giving comfort to America’s enemies ?
5. Do you think any of your previous 3 employees would hire you again ?

Dr. Carpenter... thanks for nothing. You will always be remembered as a loser and a quitter.

Oh, who am I kidding. Lol. If you came up with anything to say besides Matlock or Maude the old folks really would have heart attacks.

Anyway, see you tomorrow. Of course.

Pay him in shekels..and fool's gold...

Even the most caustic folks on here know that , deep down, the right black candidate could have been found. But it would have been TOUGH ! They should have gone with a conservative interim for the 2 or 3 years it takes to find a Ben Carson or Herman Cain. These men demand standards and exhibit patience, rather than defaulting to the race card the first time (or 2nd) that they are held accountable for their results. Trouble is, nearly all teachers are SJWs, it is a product of the Dewey system and the teachers union that is probably the one single entity that is the most Godless and communistic in America today. Been to a graduation lately ? Not only is it at Satan's domicile RLDS auditorium, the only people who break the rules by hollering and whooping are black folk. Their intolerance of authority is something to behold, while folks like David Beatty blabbed on about social justice. Really, we could put a pack of flunky boy scout leaders in charge of education and get some really great kids out of it. These current "educators" are so corrupted in thought that they must sweat themselves awake each night , aware of their fraudulence. Most of them had to have wondered- even in their progressive mindset- if Carpenter was a good move. But they knew they were playing with our money, and in the old days, picking a white guy wouldn't get them laid at the next teachers conference. Dennis Smith, I learned about the perils of progressive thought from you. What happened to the Dennis Smith from 1980 ?

Eliminate band to pay for this?

I drive for Uber part time on the weekends, during the week I work my corporate job, the only reason I drive is because my wife spends all my money and screws Negros on the side. I would divorce her (and eventually will) but I dont want my hard earned money going to support the porch monkeys that she is screwing so there is that. And BTW when ever I have a negro in the Uber car, I treat them kind and am always respectful, yet they always rate me a 1. I have never been rasist but I need to go back to church because I am starting to lean that way these days.

Dennis Smith took the Masonic oath. They are morons because they do so before reading Albert Pike's book that explains, in the end, they realize they take an oath to Lucifer. And that's tied to the progressive, communist NEW WORLD ORDER..Globalist Agenda. They're destroying themselves and their communities.

Under PEG training I was told black people can't be racist