Just now the Jackson County, Missouri, Board of Equalization voted to extend the property tax assessment appeal deadline to July 29. That motion passed 3-0.

Even better and another political angle to this story . . .

This proposal, introduced by BOE member Preston Smith, would apply a new, lower percentage for each property based on the property’s previous assessment.

If your property tax assessment increased 12 percent or less, it would remain the same. 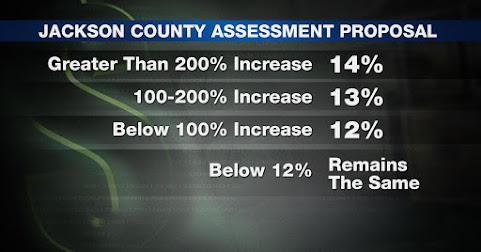 Best of all, here's the FULL BODY BLOCK to Exec Frank White:

This comes after Jackson County homeowners became furious at County Executive Frank White after refusing to admit any errors in the county’s process for assessing property taxes.

White says he will not do anything about it, citing that the request is going against state law.

Under the new proposal, no home should be taxed more than 15% because physical inspections cannot take place, and that is required by law.

And now here's KICK-ASS TKC INSIDER PERSPECTIVE that hopes to offer a bit of behind the scenes edification . . .

INSIDER: "JaxCo property owners were getting screwed by Mike Sanders' handpicked successor, Frank White, and his administration, so it's nice they can go to MO Tax Commission for relief. And there is Victor Callahan ready to help!"

That's pretty much a not-so-subtle hint that bigger forces than the County Exec have now taken notice of this drama and they're starting to FLEX on the Courthouse. Which is good news for so many locals looking to stay in their homes despite the callous indifference by many top ranking denizens near 12th & Oak.

How did things ever get this screwed up?

The entire State of Missouri has to work around Frank White in order to find a solution. that's a horrible way to run things.

It's still all fucked up to hell. Preston Smith deserves an award for all the effort he's put into this exposing all this crap and incompetent bullshit. Basically saying and putting it on public record "the systems totally broken".

“I don’t have confidence they know what they’re doing,” Smith said. “This is just not working. This is not a formula for success.”

This is kind of a dumb question but I don't have to appeal my increase if this thing passes, right?

Let's face it Sly James put this city into debt that probably can't ever be repaid and they still want rob us blind.

You mean to say that Frank doesn't know even the basics of property tax assessment?
THE most basic responsibility of county government?
And he was still re-elected by his clueless supporters?
Shocking!

Frank lied in front of the Legislature. He could have done something but he chose not to.

Isn't that enough for RECALL?

Thank you Preston. I pretty much think he's the guy who save the county!

This is a sensible rework of the FUBAR that Frankenstein the Monster wouldn't fix.

And, it will keep very many barely getting by types from being robbed of their homes.

Kudos to Mr. Callahan for bringing a "make my day" to very many. And, big ups to "Mr. Smith goes to (watching sums)" for the common folk.

But...but...Frank was such a good baseball player.

Contact Missouri State Tax Commission with that question to be sure. Seems logical to get the appeal in by deadline. The caps are a proposal that's not passed, YET. Get your information directly from them. That's their job that your taxes are paying for.

3:30 we were told unless you have a document stating a new assessed value that you best have an appeal filed.

Can't the city just spin and hype this as "KCMO Pride! Standing Up and Fighting For The Taxpayers! Showing the World How It's Done!" or something along those lines?

Check your personal property vehicles etc. These have also increased not depreciated as they should. Some idiot is doing across the board increases on some of those. If so, jam the switchboards!

Cooler heads prevailed. Still have some firing of public officials to do...

Public sentiment is against Frank White.
While he might be Missouri’s dunce, he continues to show he knows nothing about:
1. Tax laws
2. Making timely house payments
3. Wing “always Royal”
4. Money
5. Money

Frank needs to show what his personal budget looks like and what he buys in lieu of house payments. If he can’t spend his own money responsibly.. how can he spend millions of taxpayers?

Frank and Forte, what is the update on the jail?

Knowing how Frank runs the county it will be promotions all around for his crackerjack staff responsible for this cluster fiasco. Surely there's someway to remove his incompetent ass from office.

This is what happens when black people are in charge, mass chaos and robbery

Wake up! Frank does WHATEVER CALEB TELLS HIM TO DO! Caleb Clifford is the real County Executive and he is most incompetent person to ever run the courthouse. Whatever dirt he has on Frank and his wife has turned Frank into a guy who issues statements that Caleb writes. Throw them all out and let Jolie or any of the failed mayoral candidates come fix that mess. You listening Phil Glenn?