After a Summer of controversy, beat down allegations that span a few years and some serious fanboy advocacy, it seems the Tyreek Hill is back in the good graces of Kansas City Chiefs fans. 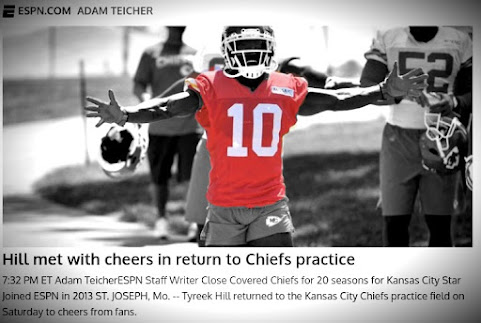 In the end neither authorities nor the NFL were able to provide any moral clarity. The full audio of bickering with his baby mama was touted by conspiracy theorists as some sort of vindication whilst others said it made him look even worse.

FACT: Nobody cares if Tyreek Hill is a good dad or an abuser. What's most important for the vast majority of deplorable (lulz) Chiefs fans is that there's no doubt he is one of the greatest talents currently playing the game as the team actually seems competitive this year. Moreover, looking to sports heroes, political leaders or celebrities of any sort for moral guidance is probably a mistake.

And so, this isn't a redemption story but a sign that Kansas City seems, justifiably, distrustful of any media narrative and now relies only on their constantly shifting emotions to determine where they'll place their affections.

And all of this inspires tonight's playlist comprised of favorite Tenacious D songs given their local show this evening where TKC is enjoying the company of other GenX cynics:

Only agree that Tyreek's story has been too complicated for the media to follow accurately. The hit job done by the Star & Tv5 were enough to make the public distrustful, don't blame the fans, the media did a poor job of telling this story.

They didn't ask me if I liked him because I still think he is a POS!

^^^ Don't blame the media, The NFL & the front office help to hide the truth from everyone. In the end, the only thing to judge him on is his on the field performance and actually, that's probably the best thing.

Most Chiefs fans are drunk, they'll cheer anything.

Someone broke the boy's arm.

This shit happens all the time. It is a private matter, leave the man alone. It's not like he's gay or something.

How do you know for sure Funkyshit? For someone who doesn't know shit you sure yak a lot.

I agree.
And Tyreek will mess up again.

Hill has had so many chances to try and be a decent person. What's messed up is that his g/f and her family seem very ruthless. Too bad he doesn't have any real friends or people he can trust. When he reaches a new contract deal, things are going to get even harder for him and the media circus will be even worse. He should actually count himself lucky that he plays for KC where the local reporters are all on the take for the Chiefs and don't report anything without approval.

I want to see how Mecole Hardman does. The kid made the news for buying his mom a house.

He is child abusing trash.
Always has been.
Always will be.
The fans don't care.
They only care about football.

Love him or hate him, he is one ugly bastard.

49 years of disappointment and you still believe the hype. Tyreek will slip up again and soon because he got away with his last act with no punishment. He is a very stupid man, great athlete, but stupid. He can't string together 4 words without "Like" or "man" or "you know" or "fuck' or "bitch".
His failure will again bring down the team and even Mahommes will be able to save them. I'll bring this back when it happens or when we watch the playoffs and the Chef's are not in them.

@ 940, You are right. Listen to Mahommes talk and you're impressed he speaks like a smart man. A lot of the team speaks with occasional filler words but Tyreek can't speak. His language skills are worse than Mike Tyson.

He's a moron. How the hell did he even get admitted to college?