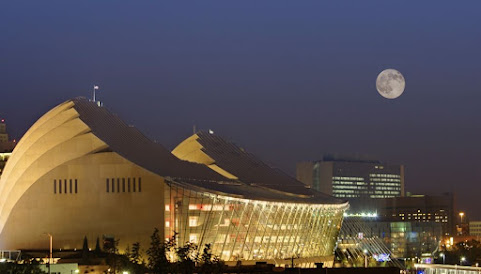 A few considerations for this evening that marks and EPIC American historical achievement . . .

The EPIC American achievement applies to Kansas City inasmuch as some people say the best days of this town are behind us whilst most optimistic souls continue to win elections.

Some of our favorite local and national missives on tonight's anniversary . . .

Local artist had vision of Apollo 11

Moon-Landing Hoax Still Lives On, 50 Years After Apollo 11. But Why?

The Royals and the moon landing

The Apollo 11 Moon Landing Was A Triumph Of American Exceptionalism

Back here on Earth, the Chinese can build a bridge in two days.

WILL THE U.S. EVER GO BACK TO THE MOON AND BEYOND OR IS THE SPACE RACE NOTHING BUT TOURISTY FROU-FROU?!?!

Remember that current Congressman and former Mayor Cleaver coined the last part of that phase about the streetcar which has continued to spark local debate and out of this world tax increases.

And all of this inspires our moon-y playlist for tonight . . .

Im surprised the butthurt dummocucks haven’t gotten this clearly racist moon landing stricken from the record, I’m serious, you just never know what stupidity they’ll come up with next like removing the statues of these American heroes and putting a black and a mooselimb in their place.

Sorry your wife is with a black guy tonight

Go to the moon?

Shit, we won't be able to go to Belton. We spend all of our money on keeping black people happy now and pretty soon, HEALTH CARE FOR THE WORLD AND IT'S FREE!!!!!!

Democrats: "We will put a pre-op tranny freak next to your 7 year old daughter in the Women's room."

JFK: "We will go to the moon, because it is hard."

Democrats: "That pre-op Tranny freak next to your daughter is going to be hard".

Deport Byron to the moon, B*tch.

Chuck, JFK was a Democrat. Don't be such a MAGA troll.

Moon landing was in a Burbank studio.

I give credit for even mentioning American Exceptionalism. It's an idea that many have forgotten and some, mistakenly think of as racist or authoritarian. BUT that us wrong, most objective people know that this nation is an inspiration and the light of the world.

Here is the unpleasant (for low IQ sheeple) truth:

The kind of authoritarian government/media that most Americans attribute to places by China/Russia/North Korea, is actually what we have in this country, though it operates with a softer touch.

You have the illusion of a functioning Democracy, with the ability to elect imbeciles to represent you in Congress. Neither major party has a monopoly on "STUPID" but the Democrats seem to push the limits of reality with mental defects like Maxine Waters, Hank Johnson, Nancy Pelosi, Nydia Velazquez, Steve Cohen, Al Green, and of course KC's own Rev. Carwash.

Now please don't pin me as a Republican, because I'm not, I am an equal opportunity purveyor of truth. Let's quickly review our last 4 Presidents and understand how/why they were elevated to that office.

Barack Obama (D) (not even his real name) is largely a fabricated character that was foisted on America to assuage the Bush Jr. backlash. A President with virtually no living relatives, a history of homosexuality and drug use, he's the closest thing to a composite character President we've ever seen. Did you notice how he continued (even escalated in some cases) the hawkish foreign policy of Bush Jr.?

George W. Bush (R), can you say wealthy political family privilege? This one was really dumb. A fraternity party boy with a history of alcohol/drug abuse. Cheney (former Halliburton CEO)and the Neocons let W. front their Project For A New American Century real-world exercise. The Vice President's Energy Task Force began carving up Iraqi oilfields in Spring 2001 among Western alliance members. Are you still clinging to the September 11 2001 myth? Can you say "Fake News"?

Bill Clinton (D), hey is anybody noticing a pattern whereby the 2 parties alternate being America's Top Spokesmodel in the White House? Clinton (and Hillary) sold their soul way back in Arkansas. Read the book "Compromised" by someone who had ties to the KC metro for an understanding. Remember when Clinton was essentially toast in the 1992 race, being exposed as a serial adulterer? Who saved him with an order to CBS/MSM and a 60 Minutes prime-time interview after the Super Bowl? The MSM then promoted the degenerate as "The Comeback Kid" and the rest is history.

Oh, about that 1969 moon landing, it simply never happened. It didn't happen, just like so much of what you've been told over the years, didn't happen or at least didn't happen the way you were told by the government/media.

Learn something today, listen to this:
https://www.youtube.com/watch?v=qMnMC-gA6lU

The moon will be a perfect place for all the Liberals and Democrates to start a new life, after all they HATE this world and especially the United States of America, If they asked nice, US rest of the country would actually try and help you fill your new moon and world with all of the illegal aliens that are your priority, after all you will need desperate workers to build your infrastructure there, now you wont have any money to get anything done but I am sure the "squad" has a plan for your new planet, if I were you I would vote AOC to be your leadership, all the rest of us only ask is, while we will help you and your crazy ideas get there that you get there sooner than later, and NEVER come back.

^^^ Thats a great Idea, I would respect the moon more than I ever have before, even if it turned blue!!

MOON LANDING IS RACIST AND THE ASTRONAUTS WERE RACIST

Yep, hundreds of people were in on a moon landing hoax and have managed to take the secret to their graves.

That pretty much tracks with everything I know about human nature.

The moon is too white. It is racist. When will we get a "Moon Of Color?"