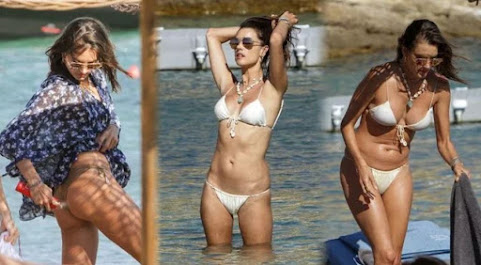 Just a peek at pop culture amid rising temperatures across the nation and the globe . . .

Daily Mail: Alessandra Ambrosio shows off her incredible figure in a teeny-tiny white string bikini as she saunters down the beach in Mykonos

PBS: How to exercise in the summer without heat exhaustion


People work to cool down during hot summer days

KANSAS CITY, Mo. - Midwestern summers go hand-in-hand with heat and humidity. Metro cities are trying to help people by creating cooling shelters. One is located at the community center in Independence, but hardly anyone is taking advantage of it. "I don't think we have had a lot.

You'd never pick him out as someone who'd been camping in the Johnson County woods for the last year. We met at an Olathe library, one of the many cooling centers publicized during this latest extreme heat wave. We'll call him Bob, since he didn't want his identity disclosed.

Air conditioning units are working overtime in this extreme heat, but what should you do if yours goes out?

KANSAS CITY, Kan. -- A series of unfortunate events may leave one Kansas City, Kansas family homeless. After a tree fell on their home weeks ago, it's a race against time to put the pieces back together. AJ Reese is not a contractor, but he's having to learn quickly.

The Truman Presidential Library & Museum in Independence closes after its normal business hours Monday, and it likely will not reopen for at least a year as it goes through a $25 million renovation.Visitor numbers have picked up a bit this week, Library Director Kurt Graham says, and the Library will help provide one last chance for visitors with free admission Saturday, Sunday and Monday.


You'll soon have 20+ smart devices in your home; How many will steal your data?

Consumers of smart technology need to be wary of most of the lesser-known brands in retail stores, said Scott Ford. "Most likely they're using a platform architecture that sits on a foreign market, sending your data to who knows where, without the protections that are common in the U.S," said Ford, CEO of Pepper IoT, a Kansas City-based firm focused on delivering connected Internet of Things services.


Saturday could be hottest of our heat wave

I agree it's easier to deal with being cold than to be real hot.

Katie colored her hair blonder last week and covered up all those black and grey roots.

What's with these song titles and band/singer names? Machine Gun Kelly sings Trippie Redd??? How about playing Dirty Socks singing My Nose Has a HUGE Booger?