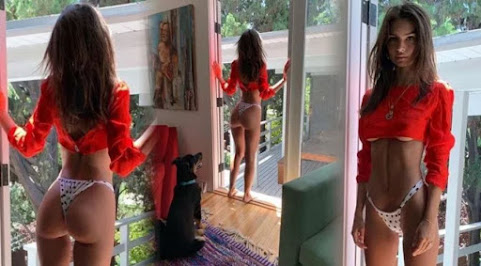 A glimpse at morning hotness and our discourse . . .

Finance: Why hidden 'likes' could help you spend more time on Instagram

Closer to home, here are just a few of the nicer, local news links worth a look right now . . .


There's A Soundtrack For Kansas City's Nelson-Atkins Sculpture Park, And It's On Your Phone

If there was a soundtrack for the sculptures on the lawn at the Nelson-Atkins Museum of Art, what would it be like? Christina Butera thought about that a lot while writing her dissertation in composition at the UMKC Conservatory of Music and Dance.


'Queer Eye' changed this Kansas City shooting victim's life - and mine, too

In 2012, Wesley Hamilton, then 23, suffered a gunshot wound to the back and was paralyzed from the waist down. After lying in a bed for two years battling depression and physical ailments, training and exercise have brought a new life and hope.

Supporters say areas designated as zones can leverage the tax-relief program to benefit investors and businesses - and residents, too.


Kansas Pinball Wizard Changing the Face of the Game

Competitive pinball has long been dominated by men. But that's changing ...thanks, in part, to a Kansas City-area woman who is quickly rising up the international pinball rankings. She already has some major trophies to her credit, and as KCUR's Kyle Palmer reports, she's now aiming even higher.


A year after tragedy, Branson debates future of duck boats

BRANSON, MO (AP) - One year after 17 people died when a boat sank on a Missouri lake near the tourist town of Branson, the question of whether the boats should return to the lake remains a topic of debate.

Members of Kansas City's art world will gather on Saturday to toast Victor Babu, a Kansas City Art Institute professor who died in April but whose influence will be felt for generations. "He would talk to you about the essence of everything, like he'd already boiled it down.


The Biggest Picnic in KC and other Weekend Possibilities

Kansas City's Big Picnic will take over The Nelson-Atkins Museum of Art's (4525 Oak St) front lawn this Sunday from 4 to 8 p.m. The Kansas City Parks & Rec event is the region's largest picnic and will feature more than 20 food trucks, live music, games and more.

^^ He went to the big orgasam in the sky. In short he shot his last load.

If there was really a soundtrack to the Nelson Art Gallery, it would consist of the noise made by W. R. Nelson spinning in his grave at the idea of what the adherents of post-60s Crap Art have done to the Institution he created.

^^Go away loser. Your pessimism is so boring. Go find something else to cry about. Fucking Debbie Downer. No wonder you're here instead of with family and friends. They fucking hate you!

TOP PHOTO -- OF JAMB AND JELLY

After Emily got stuck in the door jamb, I used some K-Y, and everything worked out in the end!!!

Emily is the hottest woman on the planet!

@8:54, Aww, idnut dat speshul? You're the self-appointed hall monitor at TKC. You're here, all day, everyday, sounding like the simp you always are.

^^Umm.. How do you know he's here all day unless you are here all day??? Busted! Simps...I tell ya, they always play themselves!!! LOL!

Can't wait to see how long it takes him to deny this.