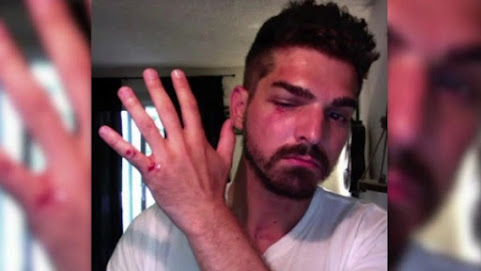 Here's another note on the KANSAS CITY SUMMER CRIME SPREE picking up the tempo and victimizing more innocent people . . .

Joshua Merello said he was parked on 44th Terrace near the busy intersection of Holly and Roanoke in West Plaza Saturday morning after a friend's wedding rehearsal party. He was sitting in his car about to drive home when he said two men in their 30s approached his car.

"I honestly thought I was going to die," Merello said.

He said the two men opened his driver and passenger doors and attacked him.

"Beat me up, threw me on the ground, drove off that way, and the only witness was parked up the street," Merello said.

Merello said a good Samaritan ran to help him, and called police. He said his bruises will heal, but his car, phone, and instruments, and equipment are gone.

He is a local musician that plays shows around town, teaches kids about music, and provides music therapy for people with Alzheimer's.

His friends have set up a GO-Fund-Me effort.

No word on suspects in his assault.

KCMO has truly gone to hell. I know trolls like geezer hater will have to post their tired replies, but there is no justification for what happened to this guy.

Come on what sane person sits in a car in that neighborhood with the doors unlocked?

This same exact scenario happens thousands of times PER DAY in U.S.A.

Man my weed dealer lives over in that enclave. Hate to hear the neighborhood is deteriorating like that :(

I lived in that area in the early '90s. It was more blue collar, people cared about the area. Was low crime. Then around '97 that all changed. Saw more and more car brake in's. Heard more of people getting mugged. Now someone put newer buildings and a coat of paint on some of the old ones.

That area sucks. Over priced condo's with little to no police presence.

Best thing to happen to that area is to destroy it with part of the Plaza and build a new ball park.

Too bad he didn’t have a ccw. He could have killed them lawfully as soon as they opened the car doors. That’s what justice has come down to in Jackson County.

He looks like his "partner" marked him with lipstick. I've seen people after they've been worked-over by two guys. The victim is barely recognizable sporting tennis ball sized lumps and requiring stitches. This is either an insurance/go-fund-me/self-promotion scam or everyone involved subsists on soy.

And yet it’s not. Weird.