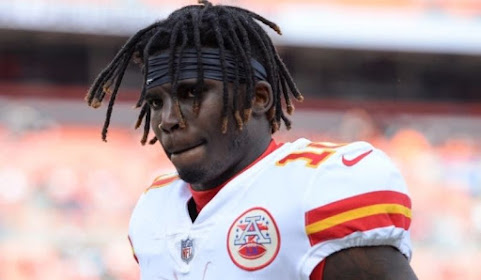 A direct link and context for the conversation . . .

C-Dot & Sports Machine talk with Ellen Mathis of Arrowhead Addict about the newly released 11-minute recording of Tyreek HIll & Crystal Espinal in the Dubai airport. Does this change the potential for a suspension? Plus, what does this new recording mean for our understanding of what happened in 2014?

Friend and fan perspective that seems to call reporting into question . . .

The Kansas City Chiefs should blacklist Brooke & Angie. The release of the full audio tape today shows they both withheld information to distort context and damage Tyreek Hill's reputation. The excuse months ago for only releasing parts of the audio?

"Am I releasing the full audio? No. We released the newsworthy portions. They discuss intimate moments and that has no news value. Some of it is them walking through the airport and being asked questions by security"

Now, given that Tyreek Hill was never charged or convicted of a crime amid a national media uproar . . .

HAS TYREEK HILL BEEN VINDICATED AMID #METOO TAINTED JOURNALISM?!?!

Whilst I'm not letting him baby-sit my Chihuahua, it's a sentiment that's growing among fanboys.

A great day for radio. Makes me want to listen to 7 hours of sports talk to get to it!

Always a question of prove your innocence when KC media is involved.

Who the hell records themselves for eleven minutes?
This has to be a fake!

Here's the real scoop TKC. It was all just a scam to cut his value. The team just saved 40 million. What would most people do for that kind of money. A few hack stories are relatively harmless.

Give them all his money.

Better her than Nike!

It's dishonest for 610 to relitigate the Oklahoma criminal charge to which Tyreek plead guilty. If Tyreek is going to claim he didn't abuse Crystal, then revoke the plea, don't try to hoodwink KC.

Is Tyreek still with this woman. Looks like she was going to set him up real good but he didn't fall for it. This kind of recording never would have made it to the real news before, now it's standard. Too bad it's just junk. Feel bad the guy had to go to court over this, a whole lot of nothing. Just a pissed off girlfriend who should never be trusted.

Nobody said anything about Oklahoma!

This is about the current abuse case that was just fake news.

Where's real donald when you need him?

If Tyreek is as fast as they say, he should run over to KCTV5 and demand a cut of their sweeps week profits. Their story was nothing but a hit job.

What would Kevin Kietzman say

If he wins a super bowl. Dude can smack my son!

oh wow. I didn't know a kc star report purposefully withheld this because she wanted to act as a moral arbiter and produce clickbait. Holy shit that is a bad look. Kc journalism is a joke and if no one comes down hard on this then all is lost.

RIP Star. With the sports department compromised the demise is accelerated

^^^ Be fair now. I think Mellinger is trying to make up for it today but, as usual, he can't carry the whole newspaper.

Brooke Pryor should be ashamed of herself.
Selective editing can make Jesus look bad.
What will The Star do now that the public knows the truth?

Well, what did you expect? Integrity? Ethics?

This is the paper, keep in mind, that was (and still is) the tame organ of City Hall. They sat on their hands while the town slipped into violence and bankruptcy, never failing to suck up to the powers that be.

Shut it down. Out of sheer embarrassment if nothing else.

Forget the broadcast "journalists" playing portions of an audio made by the girlfriend trying to trap Hill. They are chasing ratings for advertisers. I understand their motivations.

What about the JoCo DA that held press conferences and made declarations about a crime being committed? He had no business making public statements about the people involved without the evidence or intention to charge someone. Where is his apology?

Is this why all the chest thumping apes and club wielding neanderthal "cheetah" lemmings are piling on Angie Ricono on her twitter feed?

I jumped the gun on this when I heard the previous audio, the extended version definitely brings more context into it. Shame on me I guess. One thought I'm pretty comfortable with is that these two should not be together as a couple. It's not good for either.

She's nothing but a gold digger. He didn't know he was being recorded. She did. Of course she won't admit she lied.

Agree 100%. She cries wolf as an abused woman by a black NFL star. She was always only after his money. She's worthless. I can read between the lines. Most people can't. Just like everyone who was ready to convict him and kick him out of the league, send him to jail on an edited audio tape she knew she was recording. He thought it was a private conversation. I'm not black and I'm not a Chiefs fan. But I call BS when I see it and if he had culpability, and he thought it was a private conversation between the two of them, he would've likely said something of the sort, especially since she was trying to bait him into it. Remember, she knew the mic was recording. He didn't.

Mellinger can't carry his own jockstrap. KC star and their reporting is complete hogwash. Always has been. Mellinger is an idiot looking for a headline.

I'd donate money to have that paper publically destroyed.

Exactly. They should set Tyreek up to trap her on audio admitting to her wrongdoing when HE knows the recording is happening and SHE doesn't. I'm not saying she's a gold digger, but she ain't messing with broke... oh wait she is a gold digger. Nevermind.

At least you will admit a mistake in judgement. Integrity. KC Star and TV5 will never admit it. Not unless they catch HER on audio admitting to what she's been doing all along. Money grab and manipulation. Then they won't have a choice.

Yep. And they'll keep going. Now the KC Star is trying to say the full audio makes Hill look worse. Ha! There's no way you can spin that and make anyone but an idiot believe it. Nice try KC Star but you're full of it. Give it up and admit you were wrong.