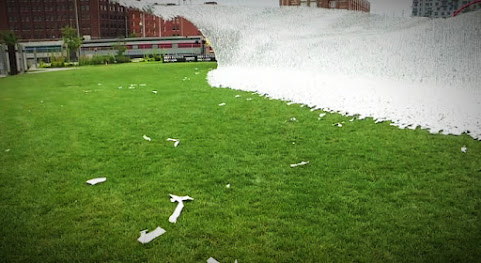 The local hipster exhibit couldn't cope with cowtown weather and ultimately was forced to shut down.

Officials at Union Station announced Sunday that the sculpture “Reflecting Motion” will not be repaired after it was damaged from a severe storm earlier this week.

Officials announced Sunday that upon further inspection, it has been determined that the impact from the storm was more significant than they originally believed.

“While the sky sculpture performed as it was engineered to do under extreme winds — by detaching from its hanging grid rather than damaging any part of the Station’s permanent and historic structures — the level of effort and expense required to repair and rehang the exhibit cannot be justified when balanced with the limited time remaining in the original schedule,” the station said in a news release Sunday.

Best in the Midwest, baby!

So many free headline for this this and it was ultimately a disappointment. Really surprised that there weren't many questions the stability of the structure. Glad nobody was hurt.

So, it was resting, but now it's dead. I suppose the loved ones are grateful it wasn't a sudden, nor painful passing. When is the balloon release and candle light vigil?

Too bad, it was just turning its life around!

Just more shit for a landfill.

Very little responsibility for all of this junk from the so called creative community who want to seem like they have a conscience but really are just a lot spoiled brats.