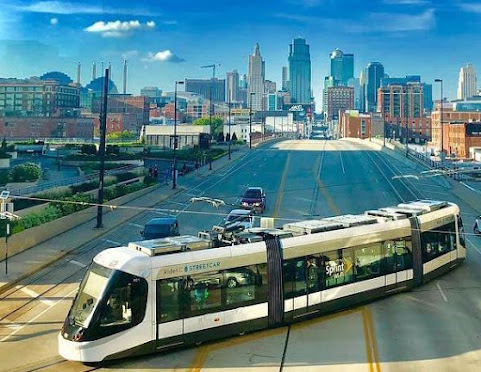 The start of an experiment today, we're sharing some important news links that are worth a look but maybe not right for debate. And so, we're putting them in this convenient section. Take a look . . .

Ford Motor Company SOURCE: Ford Motor Company Ford is showing off what an all-electric F-150 prototype can do. In a video unveiling the truck, F-150 Chief Engineer Linda Zhang tows 10 double-decker rail cars full of 42 2019 model F-150s, weighing more than 1 million pounds.Ford has not released when the all-electric model may be available to the public, but a company spokesperson said the company expects it will be on sale in a few years.


Youth and professional soccer take over KC area this week

OVERLAND PARK, Kan. - The Kansas City metro is the place to be for soccer fans this week. Thousands of young soccer players from across the United States will be in Overland Park, Kansas, this week for one of the country's most prestigious youth soccer tournaments.

KANSAS CITY, KS (KCTV) -- The International Champions Cup is on the move in Kansas City. The match between Bayern Munich and AC Milan will take place at Children's Mercy Park at 8 p.m. Tuesday.

KANSAS CITY, Mo. - A motorcyclist died Monday in a crash with a truck in the Northland. The wreck happened shortly after 4:15 p.m. near the intersection of Northeast Parvin Road and Brighton Avenue in Kansas City, Missouri.

LENEXA, Kan. -- A new effort is underway to save a community pool in Lenexa. Right now, the city is planning to close Ad Astra pool, near Maurer Road and 83rd Street. Ad Astra pool is a staple of its Lenexa neighborhood. It's part of the reason Marie Riley and her family moved to the area.

It's been 183 days since the Chiefs lost in the AFC Championship game. But Tuesday, the long offseason finally ends and training camp begins.

OVERLAND PARK, Kan. -- A business that sells fun has been utter misery for its customers. Customers tell FOX4 Problem Solvers they regret ever having walked through the door of a store they say has cost them months of frustration and thousands of dollars.


Pond Scum Is Ruining More Than Your Kansas Lake Trip

WICHITA - Toxic blue-green algal blooms have been causing major problems on Kansas' lakes since about 2010. Because the pond scum can make people sick, the lakes became out of bounds for swimmers and the like. Yet now the phenomenon is costing Kansans money.

KANSAS CITY, KS (AP) -- Authorities say two police officers have been hurt in a hit-and-run crash in Kansas City, Kansas. The Kansas City Star reports that the wreck happened shortly before 11 p.m. Saturday near the Kansas Speedway. Police say the driver of a truck struck the officers' police cruiser as they sat inside completing reports from a previous crash.

On the field, Kansas City Chiefs star defensive back Tyrann Mathieu is known for giving out big hits to opponents. But Mathieu is also generous off the field.Mathieu gave $1 million to the LSU football program, and LSU unveiled on Sunday the "Mathieu Players Lounge" as part of its renovations to its football operations building.


How The Kansas City Royals Can Win The MLB Trade Deadline

The Royals are roughly 30 games below .500 and have already begun to sell. On July 14, they traded Homer Bailey to Oakland, and the next day, they traded Martin Maldonado to the Cubs. Get ready for the MLB trade deadline madness by reading Forbes' full coverage , with an overview of how all 30 teams are approaching the next week.