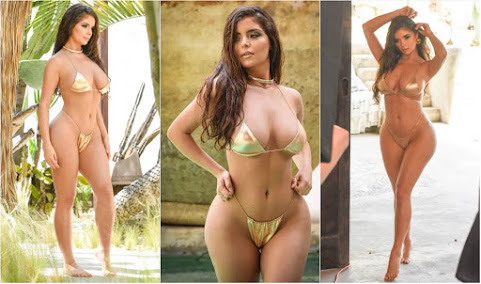 A glimpse at Summer culture and news . . .

Forbes: How One Student Launched A Million-Dollar, One-Woman Bikini Empire

KANSAS CITY, MO (KCTV) -- It's been a noisy few days at 35th and Gillham. "It's a little more narrow, hard to drive, more honking," Josh Brown, resident, said. Brown's apartment lost water last week when a giant sinkhole formed beneath the street, Tuesday, the hole's covered and contractors are resurfacing.

Thieves broke into the City Union Mission's frozen food warehouse Thursday, taking hundreds of dollars' worth of food and ruined food worth thousands of dollars."About $50,000 worth of frozen food that had to go straight to this dumpster," said Jon Capp, City Union Mission's chief operating officer.The thieves broke three locks to get inside the building near Eighth Street and Highland Avenue."They stole about $300 to $500 worth of food but ruined (food worth ) many thousands of dollars," Capp said.

KANSAS CITY, Mo. - Protesters in Kansas City, Missouri, and Overland Park gathered outside the local office of two U.S. senators to demand change at the U.S.-Mexico border. Migrant detention centers along the southern border have drew scorn from humanitarian groups , who say there's a growing crisis with overcrowding and hygiene among the immediate problems. Protesters in Overland Park were outside the office of Sen.


Kansas may add two vaccines to required list for students

KANSAS CITY, Mo. - Kansas health officials are reviewing public comments on whether the state health department should require more immunizations for children in daycare and public schools. The current proposal would add vaccines that protect against meningitis and hepatitis A to the state's required vaccination list for school-aged children, putting Kansas in line with recommendations from the Advisory Committee for Immunization Practices, which guides vaccine use in the country.

KANSAS CITY, MO (KCTV) -- Thanks to a Kansas City police officer, a dog who may have starved to death is on the road the recovery. The KC Pet project says the 5-year-old Akita mix is the skinniest they have ever seen.

LENEXA, KS (KCTV) -- People across the metro will be hitting the water this fourth of July holiday, but thanks to all of the flooding, there are some issues you need to be aware of.


Cutting the card in a digital world? Behold the staying power of the analog business card

Anyone remember Bump? You might not, but the ultra-popular app has about 125 million downloads since its debut in 2009. Free for both Android and iPhone, the app allowed you to instantly share your contact information by literally "bumping" your smartphones together in some kind of techno mating ritual.


Kansas, Missouri considered some of the most dangerous states during Fourth of July, study finds

Oklahoma has been ranked the most dangerous state during the Fourth of July, while Kansas and Missouri both rank in the top 20, according to a study. According to the home security website A Secure Life, the Sooner State is considered to be the most dangerous state during Independence Day because of the high wildfire risk and a high rate of traffic deaths during the holiday weekend.

I hate that chubby women are being hailed as fancy glamour models. You know, there was a time that normal dudes could have a chance with a pretty chubby girl. Now they think they are hot stuff and won't give most guys the time of day.

She give me a Demi.

Those protesting the detention centers at the border (calling them camps to associate them with concentration camps is right out of the Saul Alinsky playbook) should volunteer to take in a family or two, provide them with necessities, medical care, a place to live, and sustain them for the next year or so. In fact, there's a family at the border right now with tuberculosis. I just read there's a case of an illegal alien with mumps in Kansas. I am not saying they are all diseased, but let's see how welcoming these virtue-signalers are when they have to put up or shut up. We didn't invite these people here. Sorry, but when thousands come across the border, they may end up in a temporary holding center that is not very comfortable. What did they expect?

^^Actually, we did invite them. Every time you do a line of coke, you invite refugees to come here. It's our demand for narcotics that fuels this stream of humanity.

The Concentration Camps at the border will be Der Fuhrer's undoing.

Most people do not see them with eyes of hate like you & he.

^^ Oh God what a sad story Byron. You are such a loser. If the Dems don't want people in these camps then why don't they warn them not to come here?