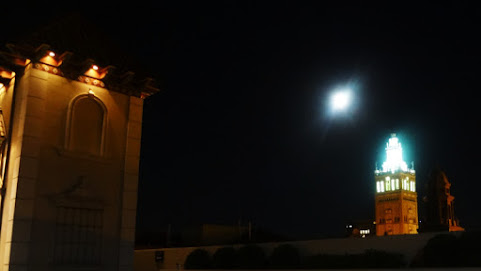 For our beloved late night readers we wanted to share a bit of evening walking, our shot of the moon over Kansas City and this quick glimpse the local news scene that focuses on American history and the moon . . .

The moon landing was watched by an estimated 600 million people around the world.Facts:July 20, 1969 - Apollo 11 becomes the first manned spacecraft to land on the moon.Neil Armstrong (commander), Buzz Aldrin (lunar module pilot) and Michael Collins (command module pilot) were the crew.The Apollo 11 spacecraft consisted of


"Man on the Moon:" The 50th anniversary of the Apollo 11 landing

One of the greatest achievements in the history of mankind began on July 16, 1969 - exactly 50 years ago today -- inside Houston's Johnson Space Center. Inside Mission Control on that summer morning, teams of NASA flight controllers sat nervously at their consoles.

LEE'S SUMMIT, Mo. -- America is celebrating the 50th anniversary of the launch of Apollo 11 this week and the lunar landing on July 20, 1969. But it's entirely possible Neil Armstrong and Buzz Aldrin wouldn't have stepped foot on the moon -- if not for a Kansas City man and his taste for barbecue.


The greatest photos ever? Why the moon landing shots are artistic masterpieces

Fifty years ago this week, a former navy pilot created one of the most revolutionary artistic masterpieces of the 20th century, one we have yet to fully assimilate. His name was Neil Armstrong and his astonishing act of creativity is a photograph of his Apollo 11 crewmate Buzz Aldrin standing on the Sea of Tranquillity on the moon.

KANSAS CITY, Mo. -- It's the week of the 50th anniversary of the first time humans set foot on the moon, and Union Station is helping metro residents celebrate. On July 16, 1969 at 8:32 a.m., the Apollo 11 rocket launched from the Kennedy Space Center in Florida.

It's Not TKC Without Conspiracy Cabrones


How Moon Landing Conspiracy Theories Spread Before the Internet

Conspiracy theories about the Moon landing have been around for years. Decades, in fact. And while it's easier than ever to spread false stories thanks to the internet, the belief that humans never landed on the Moon is way older than the web.

Keeping the astronauts of the Apollo 11 spaceflight and moon landing safe in orbit was the mission of a local man, Dr. Harold Finch, whose idea for rotating the flight capsule helped make the man's first steps on the moon possible 50 years ago this week.

A great achievement. Could we do it again today? Probably not.

Sure we could. Within months. Can we... To many democrats that want to say no.

The Moon landings went no where. I remember the talk of space stations, moon bases, expeditions to Mars...it was gonna be 2001 space Odysseus time. Oh, and cancer was going to be cured by 2000.

Why are we celebrating something NASA faked on a Hollywood like sound stage?

This ranks right up there with evolution and climate change as one of the great hoaxes of all time from the science community.

If you want to watch an appropriate anniversary movies, try Capricorn One.

2:50---And of course you know tho was o the grassy knoll too