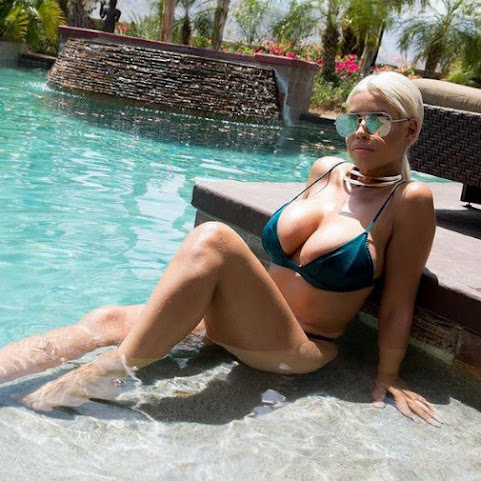 A peek at an internationally famous "adult actress" in repose via Instagram in order to remind our blog community that pop culture is pr0n and pr0n is pop culture . . .

Closer to home, here are the top stories we're checking during the midday . . .

SACRAMENTO, Calif.--(BUSINESS WIRE)-- Machine-Intelligent Technology Part of Continued Commitment to Utilize Innovations to Realize Up To $1 Billion in Cost Efficiencies and Reduce Infiltration Electro Scan Inc. today announced that its patented technology has been selected for a 22-mile sewer condition assessment project for the City of Kansas City, Missouri as part of Kansas City's Smart Sewer program.

OLATHE, Kan. - From protected bike lanes to greenways, city leaders in Olathe, Kansas, want you to think outside the box when it comes to the future of transportation in downtown. The city is hosting an open house Tuesday from 4 p.m. to 6 p.m.

For Casi, the past few years have been filled with experiences that many musicians only wish they could say they've done. She's played in front of millions of people on national television and received one-on-one mentoring from musicians Blake Shelton and Luke Bryan.

Star Kansas City Chiefs receiver Tyreek Hill was carted off the practice field Tuesday at training camp in St. Joseph.An update from ESPN's Adam Schefter said Hill "bruised his quad and is expected to be fine." Hill suffered the injury when defensive back Bashaud Breelan broke up a pass during drills.According to Kimberley Martin, of the Yahoo!


Max Falkenstien, 'Voice of the Jayhawks,' dies at 95

LAWRENCE, Kan. - Max Falkenstien, the affable and silver-tongued "Voice of the Jayhawks" who brought Kansas football and basketball into the homes of fans for six decades, died Monday. He was 95. The school announced his death in a statement. No cause was given.

As much press and television Tyreek has been getting and all the hurt and trauma he's been going through, it probably won't be long before he drops out due to PTSD and then decides to run for president.
Happens all the time!

Maybe we need smart workers who don't have to do a sewer line repair three or four time to get it right and without destroying a blocks street and peoples properties in the process.


What you sow you will also reap. Tyreek I wouldn't want to be in your shoes for anything.

^^and we're quit sure he wouldn't want to be in your shitty diaper either!

After taking on the entire Spanish Armada crew, she was deemed a Bridgette too far!!!

Bashaud Breelan gave Hill a huge dose of bitch slapping.....I'm glad he did. Hill might as well go ahead and paint that bullseye on himself because I'm sure more than one player on other teams will be looking to give him some real ass knocking the fuck out karma back.

R.I.P. Max you were great, always a total pro and gentleman. Thank you.

From this K-State Wildcat fan, RIP Max. Loved his commentary if and when I was forced to listen to KU.

Downtown Olathe has to be one of the worst downtowns in the country. Towns with 1500 people have more going on.