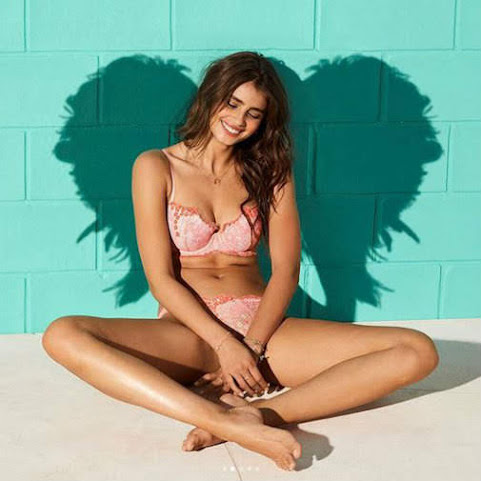 Daily Mail: Size 16 YouTuber recreates Victoria's Secret campaigns to 'show plus-size and mid-size girls' that they can 'rock' lingerie and look sexy no matter what their body type

Closer to home, here are the news links we're watching . . .

For more than a month, an 8-foot inflatable rat has stood outside the St. Louis-Kansas City Carpenters Regional Council on Hampton Avenue. Members of the International Brotherhood of Electrical Workers Local 1 are calling out the Carpenters union for working with a contractor they say pays unfair wages and benefits.

Plans to educate, inspire, and assist entrepreneurs traditionally left out of small business conversations will ramp up for the Porter House KC - thanks to new support from the Ewing Marion Kauffman Foundation's inaugural Inclusion Open.

KANSAS CITY, MO (KCTV) -- Seven people have been displaced after a fire that happened in KC on Saturday afternoon. The fire happened around 4:30 p.m. in the 3900 block of Kenwood. Apartments 21 and 22 were the source of the fire and sustained the most damage.

Hide Transcript Show Transcript IT COULDN'T BE NICER WEATHER FOR THIS WEEKEND. KATIE: WARM AND WINDY SOUTHERN WEATHER AND WE ARE TRACKING SOME RAIN THAT WILL COME IN LATE TONIGHT. IT'S A MOSTLY CLEAR SKY THIS MORNING AND OUR TEMPERATURE IS 72 DEGREES STEP THERE IS MORE HUMIDITY IN THE AIR THAN YESTERDAY MORNING.

Good idea for apartment residents. Throw their butts out if they or their friends can't behave.

Did the union borrow that rat from a neighborhood in Democratic Rep Elijah Cummings district?

Nope, stole it from Mar-A-Lago!

Cummings is not the mayor. He is serving his constituents by doing his job of overseeing the Executive Branch.

You're a good Storm Trooper NaziDave, taking your cues from your Fuhrer.

Byron know what the hell you're talking about before you open your mouth. Rep Elijah Cummings needs to be called out on his crap and fleecing of the people. You think you have the right to slander and name call people but you don't think anyone else is entitled to have the freedom to do the same you commie rat bastard.

Someone please explain to Byron, that there is nothing wrong with bringing out the very obvious fact that Congressman Elijah Cummings has done a very poor job for his district and the City of Baltimore. Just take a look, the facts speak far louder than words! The Democrats always play the Race Card. Now, lowest unemployment in U.S. history, and only getting better. Elijah Cummings has failed badly while going through millions and millions of dollars and has nothing to show for one damn dollar of it. It's sort like the Jazz Dist here. Millions goes in to it and and whose pocket it disappears in nobody knows. Trump is right Byron is wrong how shocking. Trump's point and he is clearly making it is that the hypocrisy coming from the left, PRETENDING to be outraged and triggered into wailing/bawling sessions about conditions at the border when their own districts are in shambles and despair. Never mind it is those like Cummings who is failing to act, not Trump...he is trying but the left is doing everything they can to stop him...and it will be the subject of their demise.
I wonder if their constituencies too agree that Trump has a point? Bet they do. ("look how they care more about the border crossers than us!" ouch.) You know it hits home when they start throwing down the race card.

Someone call Monty Summers at Full Moon Productions, owner of the Edge of Hell and the Beast haunted houses. He needs that giant rat, to go with Ratman this season! PHOTO OPS! "Dancing in the street!"

Trump made a fair point. Cummings shed a few crocodile tears about conditions at migrant detention centers, not that he knew anything about them. But the illegal entrants in those camps are in far less danger daily than his Baltimore constituents. As he did with The Squad, Trump told Cummings to clean up his own nest and show us he can do it, before messing with everybody else's. That's racism only if you define the word to include any criticism of a black politician. He told Pelosi the same thing, so I guess she's black too.

I'd like to ride out a storm on Katie.

^^and yet she never killed a cop or ever advocated anything like that.. Weird.