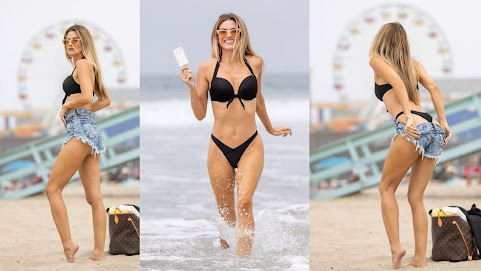 Quick peek at pop culture hotness at the moment . . .

Saw1st: Rachel McCord Booty in Bikini at the Beach in Santa Monica

Closer to home, here are some of the nicer news links worth checking right now . . .

Few sounds in sports are more satisfying than the crack of the bat. But for too many baseball fans, it has come to signal something else: danger. Commentator Victor Wishna explains in this month's edition of "A Fan's Notes." Snagging a foul ball is, admittedly, one of the greatest thrills in sports - the ultimate hands-on experience.


Mayor-elect Quinton Lucas to be inaugurated, celebrated in series of KC events

It's moving day for the KC Pet Project at Zona Rosa. But, before the animals can make the move, more work needs to be done.


Own a piece of history: Frank Lloyd Wright home for sale

KANSAS CITY, Mo. - A Kansas City, Missouri, home designed by world-renowned architect Frank Lloyd Wright will be auctioned off next month. The Sondern-Alder House is located at 3600 Belleview Avenue in the Valentine neighborhood. Lloyd Wright designed the home in 1939 and it was built in 1940.

Hide Transcript Show Transcript RAIN AS WELL. WILL IT HAVE MOVED OUT BY THEN? NICK: I THINK IT WILL. IT WILL BE DRIER THIS AFTERNOON, WET THIS MORNING. RACHEL IS WATCHING THE DRIVE, I AM WATCHING THE RADAR. SHOWERS AND A FEW THUNDERSTORMS MOVING IN FROM THE NORTH.

Woo Hoo look at all of those black people with Quinton Lucas. I think it's safe to say these days, that is a racist picture.

So much celebratin' and dancin'! Why he's the dancinest, most celebrated Mayor I ever did see!

Any hint of leadership yet?

Ugh. Old people. You both need lives. You seem really lonely. How come you don't have anything better to do?

Anybody seen "What's His Name"?
You know, the clown that used to be Mayor and screwed up so badly?
As I remember, he and some fat idiot Female crony of his were the ones responsible for the Airport fiasco.

The drunken dancing millennial mayor, god help us all

We need to get Quinton fitted for his clown suits and bow ties.

^Sure, as soon as we get you fitted for your diaper. Cool?