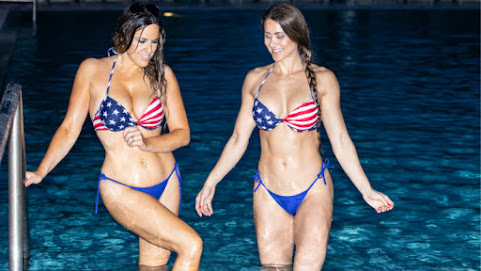 A quick survey of American culture after the celebration:

AP: Trump asks Americans to ‘stay true to our cause’

Slate: Donald Trump’s “Salute to America” Was Not a Complete Authoritarian Nightmare

UST: ‘Are you proud to be an American?’ Why Trump’s 4th of July was a tale of three different celebrations

Closer to home, here are the news links we're looking at right now . . .

A badly malnourished dog found in the middle of Oldham Road by a Kansas City police officer this week is showing signs of progress, according to KC Pet Project.

KANSAS CITY, MO (KCTV) - For most of us, the 4th of July is about the Declaration of Independence signed 243 years ago. But for one local member of the Air force and her family, it's also about what happened 75 years ago today during World War II.

Leasing KC "gets it." At their grand opening celebration for their Landmark Lofts building, they proudly showed off the bright yellow bike racks BikeWalkKC's Bike Parking Team installed along their block. Inside, guests took tours of the dedicated bike room, also outfitted by the Bike Parking team.

KANSAS CITY, Kan. - A video production team led by Aaron Monson grilled out for the Kansas City, Kansas, Fire Department on the Fourth of July to show their support for firefighters. "What we're doing today is just giving back," Monson said Thursday at the department's headquarters.

The family of longtime Kansas City Chiefs head coach Marty Schottenheimer has asked Brian, Marty's son who is also in the NFL coaching ranks, to open up a Twitter account to help raise awareness of Alzheimer's disease, something the former Chiefs coach was first diagnosed with back in 2011.


The Get Up Kids Are All Grown Up, but Still Singing About Relationship Drama

As the primary songwriter behind seminal emo-rock band the Get Up Kids, Matt Pryor has always had a knack for observing relationship drama - his own and that of people around him - and channeling it into angsty music that resonates most deeply with the teenage demographic.


July art preview: Where to go, what to see in KC this month

RJ Junger Welcome to July 2019. Several galleries are taking a lull due to the summertime. But never fear, many are soldiering on through these vacation-laden months. Get your fix for new visual arts at the exhibitions below. Carter Floyd, "Ones and Zeros" Is This Thing Working?

I, for one was enlightened by the President's speech.

I never before knew that the American Army seized AIRPORTS during the Revolutionary War (1775-1783, Wright Brothers first flight in 1903)!

I also didn't know that the Army also "ramped" ramparts in that same conflict!

And I was so poorly educated that I thought Francis Scott Key wrote "The Star Spangled Banner" during the War Of 1812, not during the Revolutionary War, that started FOUR YEARS BEFORE HE WAS BORN AND ENDED WHEN HE WAS FOUR YEARS OLD! What a Prodigy!

I am grateful for the "re-education" our Beloved Leader has provided to us. And we didn't even have to go to "Special Re-education Camps" to receive this benefit - YET!

6:21 you obviously don't know history. The Battle of Heathrow airport during the Revolutionary War was key to the American victory. British planes had been bombing our aircraft carriers and fuel stations for our tanks. Once we were able to take out their airports with a combination of our invisible stealth bombers and drones we were on the way to victory. Seriously dude, you should have learned this in grade school history, everybody knows this.

^^Don't forget he said that homelessness was a problem that only started a couple of years ago, his celebration would have brand new Sherman Tanks. But while this evidence of dementia is humorous, he thinks he can ignore a ruling by the United States Supreme Court. He took an oath to uphold The Constitution.

In the aftermath of The Third Reich, people asked how the German people could be led into infamy, like they were? Look at how this Reign of Lunacy is allowed to continue.


Byron are you a doctor? Seems to me you are just about everything and know everything. You are so stupid it's disgusting. You point a finger at Trump for the very thing you support NAZISM!

You're jealous that we have a President that gave the American people a great 4th of July and you just can't stand that.

Look at the reign of lunacy you support in Portland. Get the f**k out of our country you are the image of HITLER!

F**K your mother for having someone as evil as you!

@8:23, speaking as a Veteran, I'm going to have a problem if you try to kick ANYONE out of the Country for not agreeing with you.

No, on second thought YOU'RE going to have the problem, Pal!

Always hated the Get Up Kids. A bunch of entitled little fucks.

7:12, here's a link to an article from the libertarian (not conservative) Cato Institute, listing ten instances where President Obama took unconstitutional actions. I'm pretty sure he took the same oath as President Trump. Like they say, it's lucky you have double standards, otherwise you wouldn't have any at all.