Kansas City Mayor-Elect Reaches Out To Republican Leaders: Will It Work?!?! 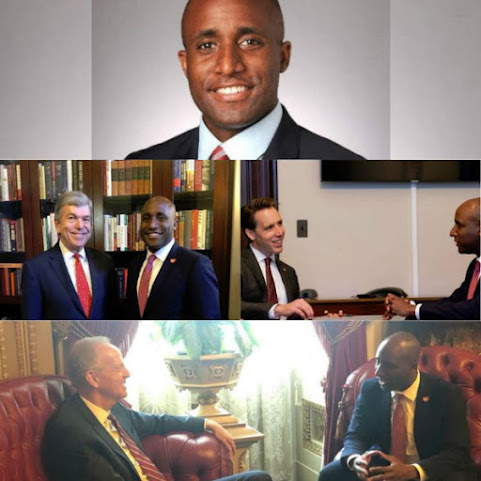 Mayor Sly has a tenuous relationship with the ruling Conservative parties in both Missouri & Kansas.

Mayor Sly's relationship with Kansas leaders was a little bit better aside from gentle chiding about the impact of the economic border war.

By contrast, Mayor-Elect Quinton Lucas seems to be taking a different tack . . . Checkit:

"Continued reaching out for our #KCMO region today with visit today to our Missouri Senators @RoyBlunt and @HawleyMO and Kansas Senator @JerryMoran."

IS THE UPCOMING QUINTON LUCAS ADMINISTRATION SMARTER FOR TRYING TO TALK WITH RIGHT-WING LEADERS RATHER THAN BATTLE THE GOP IN THE MEDIA?!?!

No matter the answer, the difference styles offers an important distinction from one Administration to the next.

TKC, don't forget that Quinton Lucas had a lot of support from Conservatives. For them, he was their only real choice because Jolie Justus was an avowed opponent and had the same strategy as Sly. So Quinton is smart to switch up styles.

^^^^ KC elections are supposed to be non-partisan so it shouldn't make a difference.

Mayor-Elect Lucas is doing the right thing. There are a lot of Conservatives in KC who need to be represented and can do a lot to help the city. Need to change the cast of characters, the same old status quo of the James gang can't endure any longer. Time for a new direction, at least Quinton is trying.

I'll take it simply as an indication that Lucas isn't stupid, the way that James repeatedly demonstrated.

Having a polite brief meeting with your state's Senators cost you nothing, demonstrates a willingness for open discussion, and could provide payback in the future if KCMO has a natural disaster, etc., and needs federal assistance.

Sly got locked into the grifter playbook. If Q is looking to go beyond it. Good for him.

Lucas will be a great Mayor. Sly James was a guy who had a perpetual chip on his shoulder. Lots of opportunities for Lucas to do well here in comparison too Sly.

The conversation will eventually end up in the same place as always.

Give us your guns and give us more money.

Go ahead and click your Ruby Sippers together and pretend that the world is just one big Rainbow Coalition while the Constitution is stripped of your freedoms and the Media continues to call you evil.

^^Ugh. When has anyone, EVER took guns away, you fucking dummy? All whites aren't racist, you are though, and Trump's not evil dummy, he's retarded and dementia-addled, ignorant, slow, stupid, fat, lazy, and soul less, but not evil.

Did he buy them a drink? Quinton likes his booze!

Once upon a time in Kansas City there was a city Councilman by the name of Jermaine Reed. Mr Reed posted on his City web portal that he had an MBA from a local college until the Chancellor from this college said he did not graduate. The portal was then corrected. Mr Reed also traveled on the City expense budget more than any other city Council member, year after year. Mr Reed also backed major City investments in 18th and Vine, the Linwood Grocery Store, MLK renaming, and the Jazz Museum. $100's of million dollars were wasted while basic KCMO services were ignored and the city Urban Murder rates soared to be among the highest in America.
Mr Trump, would you consider Mr Reed to be guilty of public corruption???

If he just listens to the chamber of commerce Republicans look for business as usual. Good government at the local level has little to do with partisan politics.

Worth a try and certainly better than bad mouthing Washington and Jeff City like Sly constantly did.
KCMO is going to need all the financial aid it can possibly get from both the feds and the state to try to fill the huge holes in its general fund.
And lots and lots of debt.
And massive shortfalls in the pension fund.
Lucas will continue to give away the city's tax base for "momentum and economic development", and the public's patience for more local taxes is at an end as evidenced by the uprisings over the reassessment fiasco.
"Don't bite the hand that feeds you" is not exactly rocket science, but at least a little common sense and grasp of reality is refreshing.

Quinton's reaching out is way more than SLie did.

10:58, non-partisan is not the same thing as non-political. It doesn't matter that party labels are not formally attached to the candidates, which party they belong to is obvious.

Sly did a little dance for the republicans on the downtown airport tarmac when he was pitching CK for the pub convention.

Anyone remember that? Probably not.

I think it's a great move. We need to see more politicians doing that.

Did Clinton tell the republicans that he wants to turn rat infested killa shitty into a sanctuary city?

^^Huh? Clinton is not the President geezer! Go sign a DNR. You are rambling and apparently sun downing!