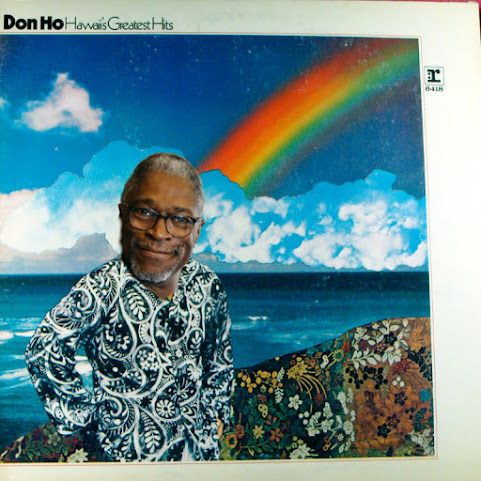 With little to risk in the way of political reprisal, the newspaper does a nice bit of reporting buried in the editorial page.

With a month left in office, why did Mayor Sly James go to Hawaii on taxpayers’ dime?

Mayor Sly James spent last weekend at the annual meeting of the U.S. Conference of Mayors, in Honolulu, Hawaii.

What benefit will Kansas Citians get from the mayor’s lame duck visit to Hawaii? It isn’t clear.

In a statement, the mayor’s office did not point to any specific lessons learned at the Hawaii conference. Instead, a spokeswoman referred to “useful and productive relationships” formed with other city officials at previous meetings of the U.S. Conference of Mayors.

Why did he go to Hawaii?
Cause de Monay wuz jest dere!

Oh this is probably only the drop in the well of what he has pulled these last few days.

If James wasn't so damned egotistical and stupid he would have taken Lucas with him and provided a cover of authenticity for this junket.
("I wanted to introduce him around")

But of course he's NEVER given a damn what any of the KC Residents thought about him, this is just another instance of pissing in our faces.

I feel sorry for you poor saps who are still in Kansas City.

He probably dipped into the $800 million that was supposed to be spent on better roads and sidewalks. Maybe he's comparing the potholes and sinkholes in Hawaii to the ones we have here.

Next time they want us to vote for more taxes, remember the vacations, car allowances, and pay raises.

This probably cost less than the European junkets the council has enjoyed. Being mayor is one of the tougher part-time gigs to be had in Kansas City. In some self-indulgent way, he probably deserved it.

Just hope James found a new job, out of town. Will be easy to pick up and go, he's a renter on Union Hill, not a homeowner. 108 E 30th St. in case you want to go set off your fireworks helicopters on his front sidewalk...like the last episode of MASH...


Sly is a thief does this surprise anyone? Go take a shower Sly you look dirty!

The Star has given this clown a pass on all of his other antics, upside-down priorities, wasteful spending, and rah rah hype for all these years and suddenly they're shocked, SHOCKED, that Sly is an egotistical irresponsible fool who couldn't care less about the taxpayers or what they think about anything.
Any other mayor who has any sense at all can easily find out all about KCMO and looks at the actual performance standards of municipalities, not all the breathless BS that Sly and the gang at 12th and Oak have spewed for the last seven years.
And the stats for KCMO are sad sad sad.
One last poke in the eye for both the public and Lucas as Sly waddles out the door.

Next time they want us to vote for more taxes, remember the vacations, car allowances, and pay raises.

Above comment useless. Stooopid KC voters never remember demorats screw them year after year. Pawns they be. Shitty is doomed. Let's all go to P&L and have a good time, since we're paying missions a year to Cordish for the privilege.

He was spewing his bullshit in his clown suit and bow tie when it was his turn to take the stage.

Sly James graduated "First In His Class" at No Class School.

FALLING STAR EDITORIAL BOARD FINDS RELIGION AND CONVERTS TO PUBLIC WATCHDOG WHILE ON THEIR DEATHBED!

Donovan: "I'm an example of what the Peter Principle can do for a night-shift clerk."

Helling: "I feel like such a hypocrite, being a white male living in suburban Kansas, while telling KC residents how to manage their own affairs."

Henneberger: "I'm only here because the Star was dumb enough to hire both my husband and I."

Porter: "Regrettably, I have no core convictions, for I serve as an enabler of this editorial board. Based on my talent I shouldn't be here, but I'll take what I can get from these white devils."

Sylvester met up with the Queer Eye Five to explore the oral traditions of Polynesian aikane rituals!!!

11:38 now that’s the truth and nothing but the truth right there! Hahahahaha!

"There is nothing you can do about it!"

IT'S FIVE O'CLOCK SOMEWHERE. THE NEXT MAYOR must get this City back on Track. If the crime continues There Tourists will Take a Detour TO Denver Branson Lake of the Ozarks. Tulsa. Lee's Summit Missouri Ha Ha