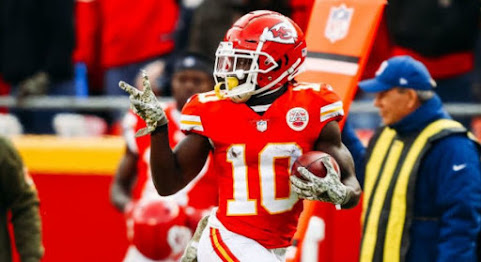 Only of the weakest minds in media attempt to consider the drama on its surface . . . Those same simpletons and hacks take reactionary tone to recent newsie revelations which are nothing more than PR from the opposing side.

Still, the upside is that there might be some hope of salvaging the inevitable downward slide predicted for the Kansas City Chiefs in 2019.

According to a report, the Kansas City Chiefs are still interested in extending wide receiver Tyreek Hill’s rookie contract, which expires at the end of the coming season.

Late on Friday afternoon, Yahoo! Sports writer Terez Paylor reported that the team “remains interested” in a contract extension after the NFL announced Hill will not serve a suspension in 2019.

On the other hand . . . More intresting trade talk abounds for cynics . . .

NBC Sports: Will the Chiefs keep Tyreek Hill over the long haul?

Contract talks are expected to resume soon regarding Hill. If there’s an impasse, a trade becomes one of the options, either in before the 2019 deadline (less likely) or in early 2020 (more likely, if the Chiefs decide to take that path).

TYREEK HILL DOMESTIC DRAMA HAS ALWAYS BEEN ABOUT HIS CONTRACT WHICH HAS SUFFERED A HIT!!!

NOW WITH A DAMAGED REP: SHOULD THE CHIEFS TRADE THE EMBATTLED STAR?!?

Potentially one of the best recievers in Chiefs history. Sign that man up. He be an angle from here on in.

If the Cheifs administration fucks this up, next year the seats at arrowhead could be as empty as the Royals seats we have seen this year.