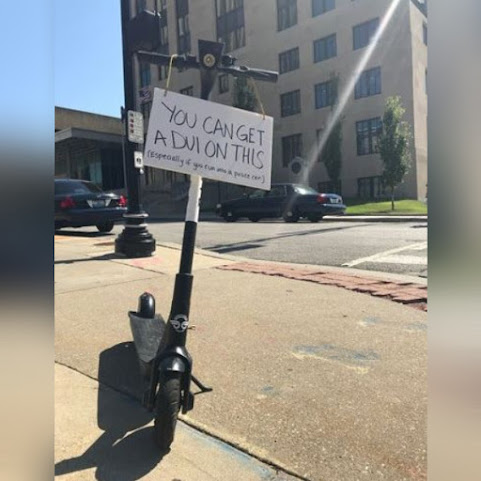 KCPD: Man on electric scooter arrested for DUI after crashing into police vehicle

A Kansas City Police sergeant was driving his department SUV east on 14th Street about 9:45 p.m. Thurs., July 18, when he saw a man on an electric Bird scooter driving it erratically on the sidewalk. The sergeant then heard a “thud” and thought he had run over something.

The sergeant stopped his vehicle and saw a man sitting on the ground with a bleeding cut on his face. The overturned scooter was lying next to him. Other officers responded and interviewed the 47-year-old scooter-riding man. They learned that he came from two blocks away and decided to “hop on” the scooter because there are no scooters where he is from. He claimed he drank four beers over the span of two hours at an unknown bar. The man said he “just got excited” and ran into the police SUV. Other than the minor cut to his face, the man did not complain of injuries. Officers arrested him on suspicion of driving while intoxicated.

The police SUV sustained no damage, other than a “face print” observed by the reporting officers.

Sounds like something one of the TKC trolls would do.

What if you don't have your scooter license with you? What if you aren't carrying scooter insurance? When do we start putting license plates on scooters?

A 47 year-old man riding a scooter?
Probably the same kind of person who regularly gets throwing-up blitzed at the P&L District and acts as though he thinks he's still in college.
Sad.

^^no what's sad is that here you sit all alone on a blog for dying geriatrics-judging others who have fun. You couldn't be more pathetic.

12:33 is a mindless idiot! Get some intelligence 12:33 We are sick of your limited vocabulary.

^^speak for yourself dummy. I think he/she's hilarious!

You would, since it's you.

Good luck on figuring out which of 'he/she' you are.

They need a citywide prohibition of alcohol. Drunk scooter driving is just a gateway to driving a car drunk.

After crashing into a police vehicle, the man blamed it on his drink of choice....KAMIKAZE!!!

But a scooter isn’t a motor vehicle ...

And it wasn’t even being operated on the street. Comment above resenting it on the side walk - big deal at that time of night there’s no peds crowding the sidewalk.

This one looks like police hassling a guy. Although he did run into the SUV it’s unclear if the impact wouldn’t have happened if the police car had just kept going.

WTF, @5:57? That must have been some nasty herbicide exposed ditch weed you were smoking when you posted that crap! Sometimes you have interesting comments that are decently intelligent, or funny, or both. But, that ^mess^ is bad.

He should be locked up for being STUPID.

It was NOT a KCPD vehicle. And the Sgt was off-duty. Get your facts straight

Where does it say it was NOT a KCPD vehicle?

It appears that TKC has a few "Snowflake" followers now, like 12:33, and 2:01 and I am sure there are a few other "snowflakes" within this thread, I guess instagram and snapchat is getting more boring for them as they transition out of their diapers and still have no clue how the real world works! Their Mom and possibley a dad if he is still around pays for their internet connection to be able to post on here. The fag that always ends his post with "weird" proves he is a fag, and more than likey on break from his online gaming experince while he went to take a piss and realized he doesnt have a dick which confuses him to weither he is a man or a woman, or a fucking grown up!! Get a life dipshit!