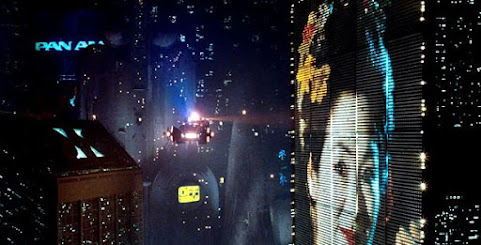 An impending legislative switcheroo which threatens to blight the entire city . . .

Fox4: Some want more digital signs in KC while others say they are too distracting

"Digital billboards aren’t allowed in KCMO, with the exception of a few that were grandfathered in, but a new ordinance would change that.

Billboards along Interstate 35 are some of the most visible in the city and they could soon go digital. The advertisement companies behind them say the proposed ordinance is a trade-off. However, that’s not how everyone sees it."

Longtime readers might remember that the fight against digital billboard blight was one of the first successful issues championed by our blog community.

Photo reference: Billboard Advertising in the City of Blade Runner

Ever hear of Outfront Media? Would you be surprised to learn that they're a frequent contributor to local KCMO political campaigns???

This one "sneaking in" during the last two weeks of Mayor Sly should't be a surprise.

So you had hundreds of neighbors get together to try and improve the city and take away some of the distracting signs the clutter the air and now, they con void that effort with a stroke of pen. Sly should be ashamed of himself if he lets this go through.

Less lights is what we need not more.

MoDOT is responsible for regulating “outdoor advertising” along highways.
Call 816-3.8.7. . 2.4.3.9
To voice your objection and their lack of action.

What are you bitches crying about on digital signs?

The "Disney Land Fight Video" should be on every digital sign in the city.

My favorite part, is the dude in the white shirt, sneaking left, then he pops the chick in the face while he is still fighting the dude in the red shirt (Who REALLY needs some help with that hair.)

Later they interviewed Micky, Minnie, Goofy, Pluto and the whole gang. Mickey said and this is a quote, that "We are moving to Johnson County".

Grandfathered in, my ass.
The huge one on the downtown hotel by the Folly Theatre was built--and allowed, AFTER the ordinance, because Mark One Electric writes big checks!
(Yet the Edge of Hell on 12th Street in the West Bottoms was forced to turn theirs off.)
A Tony Soprano deal if ever there was one.

The maga-billboard is visible for miles, including from all of the Union Hill homes.
And Gary Lezak talks about it as well.
I won't dignify it by naming the hotel and giving them MORE free publicity.

It's blight, people.
They have done better with their visual content, because for awhile, they were running ads for their buddies. Now it's less billboard, more Andy Warhol graphic eye candy.

But KCMO has been this way for decades. In the 70's when I worked for Charlie Wheeler running the Mayor's Council on the Arts, I was successful in getting the council to turn off the Western Auto arrow sign (on Grand) for a few years as "visual blight". But successors who accepted campaign contributions from THAT building owner, changed the rules, and now it's back on.

The blinking moving arrow was reportedly so overly bright and distracting that guests of Crown Center Hotel had to close the drapes on all their north-facing rooms in order to sleep.

There's not much to do in this town so it's sad that folks trying to unwind after work can't sit and have a cocktail at sunset without getting a headache.

It's not like this is Vegas. Or Broadway. There aren't enough bright lights to make it a phenomenon or an actual art installation of note.

So yes, expect Sly and the gang, including Jolie JustUS, to take handouts on their way out the door.

Nice post Tracy, but I ain't gonna lie, I wish you would have worked in a reference to "Frank White Flight".

In your ass old woman

Thanks, Chuck.
I should copyright "Frank White Flight"!
Before I write a book to follow Tommy Frank's bestseller, "What's the Matter with Kansas?"

I'm busy working on pock-faced Steve Rose to award the Mr. Johnson County Award to Frank White this year. (Only former recipients vote.) Frank has done more for Joco than Miller Nichols did for the Plaza.

And thanks for not mentioning exactly HOW I knew the lights were annoying at the Crown Center hotel.

Those were the days. When Westport was our entertainment district. And we were safe and happy. Factually truly safe and happy. The Prospect Restaurant--best spinach salad with peanut dressing in the world, thx to Chef Bonnie Winston. Before cell phones. I had cards printed up for my ad agency, listing the red London phone booth in the tree-covered back patio of the Prospect, because we all sat there in the afternoons. Councilman Joe Serviss met there, cutting deals, like ending the firefighters' strike.

And our biggest upset was when someone parked illegally, in my private spot, behind the Corner Restaurant--where we all had breakfast AND lunch.

Downtown had not been TIFFed to death. Lawyers officed on the Plaza. And Kay Waldo was not yet Kay Waldo Barnes. She was a sex therapist. Dating Stan Durwood. Who greased herself up with Vaseline every night and slept between two plastic sheets. Acc. to her bubbly and overtalkative assistant, Jacquie. While Dick Berkley was dating Sandy--most recently out of her relationship with a questionable and connected EYE-talian. As well as having ditched Stan Glazer.

And Frank White was a beloved baseball hero, who built a very grand mansion at 139th & Switzer with 16 bathrooms.

Those WERE the days!

I like the old signs and I like the Western Auto building and would hate to see that go. I'd rather people make money off signs than jack the property tax on my grandma by 300 percent

10:23: Of course you have that preference. Anyone would. But the problem is the people making the money off of visual blight are private commercial interests. Not the county--which assesses and collects flr all local governments, including the city, and the schools, which take most of the money that was merely assessed and collected for them, by the county.

Those entities set the annual property tax mill levy. Every summer. At meetings so boring, nobody attends. And it never goes down.

Real people never write campaign checks more than $25. Only businesses do. Billboard companies, but mostly developers and their lawyers. Campaigns are expensive.

Giving digital billboards, visual blight, to private companies has nothing to do with your grandmother's property assessment. You do understand that, don't you? It appears many people are hopping mad and feeling powerless. And have comingled their list of enemies about who to be MOST mad at.

The city of KCMO in particular is flat broke. Overpromised, can't even fix the potholes, let alone build the airport. Or lower crime. So at the budget hearings, they will "look at their shoes", silently. Then vote to harvest as much of the assessment windfall from the county that they possibly can. AND take campaign contributions from any business that will keep them in office. It is never either/or.

Come to Kansas. You and Grandma. Beat the Frank White Flight c. 2019 Tracy Thomas.
But hurry! Before everyone else gobbles up the affordable housing. Face facts. Your grandma has already been priced out of her house. Gentrified while she has fossilized! And face reality: it's not like she has a social life that requires her to go down to the Power and Light and party every weekend.