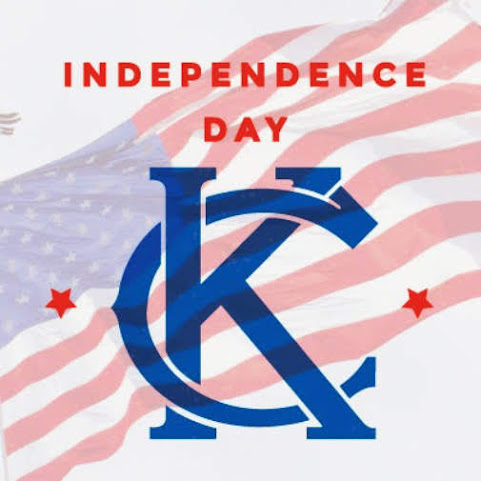 Let's be real, news on KC holidays mostly serves as a break from loved ones and nothing more or less than an excuse to take a break from an awkward conversation by glancing down at a digital device. Fortunately, we're happy to provide that respite whilst other local newsies are merely taking this day to sit at home and worry about their jobs. Check the compilation . . .


US veterans-turned-founders find natural transition, freedom in life as entrepreneurs

Military service offers parallels to entrepreneurships - whether engaged in battle or a boardroom, said Andrew Belt. "One of the things that has always helped me in operating my business is my ability to analyze the environment and be vigilant," said Belt, a U.S.

Relatives and friends gathered for a vigil Wednesday, July 3, 2019, at Barry Road Park in Kansas City to celebrate the life of Breana Robison, the 19-year-old mother who was found shot in a residence on June 28.

KANSAS CITY, Mo. - A Blue Springs woman has been charged with felony DWI in a deadly crash June 24 on eastbound Interstate 70 west of Adams Dairy Parkway. According to a probable cause statement from the Missouri State Highway Patrol, Desiree C.

Hide Transcript Show Transcript PILOT JACQUIE WARDA FLIES THIS PLANE IN AIR SHOWS ACROSS THE COUNTRY. BEFORE SHE WOWS CROWDS IN KANSAS CITY, SHE'S GIVING ME A FRONT ROW SEAT. >> RUNWAY 1 CLEAR FOR TAKE OFF, PROCEED ON COURS EMILY: IF YOU DON'T KNOW WHAT AEROBATIC MEANS, IT BASICALLY MEANS WE'RE GOING UPSIDE DOWN.

On June 12, Garmin co-founder Gary Burrell died at age 81. That same day, the children of the company's other co-founder, Executive Chairman Min Kao, adopted a trading plan to sell part of their stock holdings, which amount to more than 10% of the company's outstanding shares.

Dish Network and T-Mobile have agreed to a divestiture deal that brings the wireless carrier a step closer to gaining government approval of its merger with Sprint, people familiar with the matter told CNBC's David Faber. However, there are still issues the Department of Justice is actively focused on before it would allow a deal, the sources added.


Aides: Tax cut likely off table next year in Missouri

JEFFERSON CITY, Mo. (AP) - Missouri political aides are warning that a state income tax cut is probably off the table next year after revenues fell short of their target. The St.

A detainee at a U.S. Immigration and Customs Enforcement detention facility in Chase County, Kansas, has tested positive for mumps, and 22 other migrants may have been exposed. ICE discovered the detainee with the mumps on June 18, then identified the others who came into contact with that person, said Shawn A.

OVERLAND PARK, Kan. -- Overland Park firefighters are investigating after a lightning strike may have caused a Thursday afternoon house fire. At around 1:15 p.m. members from Overland Park and Leawood Fire Departments were dispatched to a reported house fire in the 7500 block of Kay Lynn Road.

KANSAS CITY, Kan. - A fireworks stand in Kansas City, Kansas, was hit by robbers overnight, and the victims say the alleged thieves stole more than just money. The stand near 39th Avenue and Mission Road acts as a fundraiser for the nonprofit, which uses basketball as a way to mentor and transform youth in the community.

Help For KCK Fam On 4th

A Kansas City, Kansas, family was forced from their home Wednesday when a tree-trimmer felled a tree onto a house. AJ Reese made three payments to a man he found on Facebook to cut down a tree, which Wyandotte County Code enforcement sent a letter saying had to be cut down.


WATCH: Take a ride with the U.S. Navy Blue Angels over the Kansas City skies

There's nothing more American than the U.S. Navy Blue Angels. Celebrate the Fourth of July by taking a ride with Matt Evans in Blue Angels No. 7 over the Kansas...

The funny, freckled face of Alfred E. Neuman is more or less retiring. One of the last widely circulated print satirical magazines in America will leave newsstands after this year, according to sources at DC Comics, which publishes MAD magazine. While the Harvard Lampoon remains in business, The Onion hasn't been in print since 2013.


Escaped Lansing prisoner back in custody

KANSAS CITY, KS (KCTV) - Authorities say an inmate who walked away from the Lansing Correctional Facility is now back in custody after being found in the metro area. According to the Kansas Department of Corrections, inmate Dustin Frank Robinson was taken into custody by the Kansas City Kansas Police Department Thursday morning.

Fake Baby On Board Busted

Kansas City Crime Stoppers most wanted fugitives updated video updated May 26, 2019. An 18-year-old woman who was accused of hiding heroin under a maternity shirt and pretending to be pregnant has pleaded guilty to a drug charge, according to the U.S. Attorney's Office for the Western District of Missouri.

Every carpenter knows that to build quality furniture, you start with quality materials. It just so happens that Daniel E. Beckley, the newly appointed executive director of the Kansas City Symphony, is an avid woodworker, so it's no surprise, perhaps, that the board of directors has asked him not to just manage the organization, but also build on what's there.


Severe weather season may be winding down, but be ready for microbursts

Happy Independence Day! I hope you have a safe and enjoyable holiday. The weather is not cooperating for part of the day. It will rain for about four or five hours today and then be cloudy and muggy for fireworks Thursday night.

When NFL enthusiasts think about Hall of Fame snubs, who is the first person to come to mind? Terrell Owens waiting three years? Derrick Thomas finally getting in after four years? How about Jaguars offensive tackle Tony Boselli? I would argue that one of the biggest, if not the biggest snub is former Kansas City Chiefs wide receiver Otis Taylor.

The bulk of the rain has moved out. A pop-up storm is possible after 10 p.m. Another round of storms possible early Friday morning.

Back in the day Mad Magazine was a great read and funny. But they stop picking on everyone and as many publications are doing started swinging to the left far to much and they lost readers.