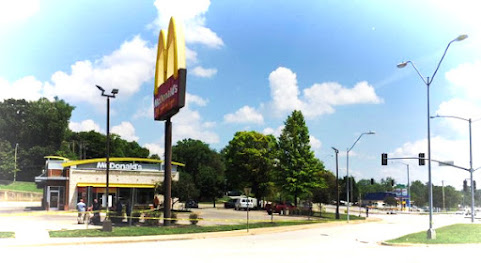 The horrific spate of Kansas City murder continues as temperatures and tempers rise . . .

Officers were called to a shooting near 31st and VanBrunt around 1:30 p.m. When officers arrived they located a man on the sidewalk with no signs of life.

The victim was pronounced dead at the scene.

Compare this latest kissing to only 62 murders at this time last year.

Yet another reason East Patrol should have never been moved. This area and restaurant are known hotspots.

^^^ I’m pretty sure petersucker has turned the whole metropolitan area into a danger zone so......

If you are hungry for Mc Poison and traveling East or West bound on I-70, DONT get off on Vanbrunt, or the next 3 exits going west, its a flytrap and the hoodrats might kill your ass if you do. Desperation has no rules and thats a desperate neighborhood!! When traveling through KC pack a lunch NEVER stop here for fun, fun doesnt exist here but a death wish does! Roll through NEVER STOP HERE!!!

Maybe it's time we start putting military bases in our inner cities and let them loose on occasions like this. A search and kill mission if you will. Ask any cop and they'll tell you that a majority of these killings are drug related. It just baffles the shit out of me how violent this scourge of society is. Violent, no empathy or compassion. Just kill at will. This shit is going on everywhere in this city now. Of course this worthless mayor will do nothing about it. Neither will his successor. What failure we had to choose from with this last election. Ask Rudy Guiliani how to get rid of this shit. You man up and stop letting all the dipshit politically correct dictate policy. He dropped crime thanks to stop and frisk. My guess is in the next 10 years, KC and St.Louis will be the murder Capitol of the US. Keep voting for failure and failure is what you'll get.

"Compare this latest kissing to only 62 murders at this time last year.:

My guess is somebody just happened to catch an enemy slippin on a 1:30 drunken Mickey D's mission.