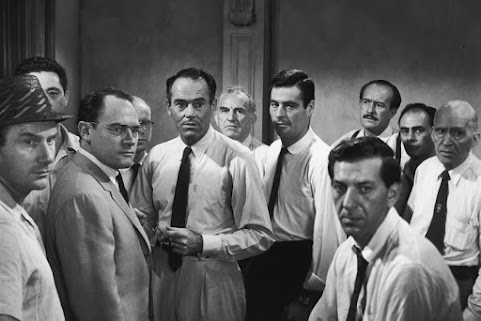 For those poor souls who haven't seen it, 12 Angry Men might represent a far too romanticized version of the court system but the cinema classic still represents the quintessential American ideal for those who respect their obligations as citizens. At the very least, it's more entertaining than the horrible Jackson County jury intro video featuring a cavalcade of local celebs.

The movie is worth revisiting now & then if only to realize how much current social media Internets content pales by comparison and to lament that opposing views no longer debate or discover with with one another but instead exist in their own respective bubbles and/or media outlets. Even (especially???) on this blog, a great many d-bag readers seem locked into personal bickering and trolling rather than actually discussing the merits of ideas.

All of this connects locally to a low-profile but important recent local legislative action . . .

"The County Legislature this week signed off on a plan presented by the courts to raise daily pay of those seated on a jury from $6 to $18. It takes effect Aug. 1. The low pay has been a point of concern for some time, and some solutions have been proposed in the Missouri General Assembly.“I will say $6 is embarrassing,” said County Legislature Chair Theresa Galvin, R-Lee’s Summit.Jackson County . . ."

Very much like the new 25K reward for homicide tips that lead to an arrest touted by KCPD, this juror pay increase is less important than it seems. Believe it or not, for people who take jury duty seriously (hehe doody) or want to turn in murderers stalking local streets . . . The cash is the LEAST important motivator.

Nevertheless, the urge for politicos to throw money at a problem persists when it's clear that residents willing to put themselves out there in order to make this town a better place aren't doing it for the money.

Good move for Jackson County and a good movie but 18 bucks a day at least helps to pay for parking and that might make people more likely to be a little less pissed off when they are jurors.

^^^^ Most people just throw their summons in the trash. They used to threaten people with a roundup from the sheriffs but it was always just a scare tactic.

So when you get your day in court, just remember that any case is decided by someone who wasn't smart enough to get out of jury duty.

Only angry jurors can truly save Kansas City.

They should at least be required to pay minimum wage.


I would be an angry juror.

@ 6:01 - Encouraging people to break the law is exactly the same as committing the crime yourself. You are required to answer the summons and participate. You do not have the right to ignore the summons. Should the county decide to get tough the law is on their side. I personally have been on two tours of jury duty and found them to be interesting and educational. Try it, don't fight it.

We have (Or have not?) come a long way since Athens.

"Athenians who served on juries received one-half drachma a day, or three obols, for their service (Aristot. Ath. Pol. 62.2). Payment for service was a democratic innovation, of course, because it allowed the poorer citizens to participate in the governance of their city. There was no property requirement for service; any citizen who did not owe any debts to the treasury, was at least thirty years old, and had not lost his citizenship through any legal action could serve as a juror (Aristot. Ath. Pol. 63.3).

Juries varied in size from 501 jurors in lesser cases, up to 1500 for the most important matters (Aristot. Ath. Pol. 68.1). Decisions did not have to be unanimous; after both sides in the case had given one or two speeches, the jurors voted by dropping ballots into two jars. Each juror had two ballots, one representing the plaintiff and the other representing the defendant. One after another, the jurors inserted their ballots into two urns. The bronze urn was for the vote that counted; the wooden urn was for discarding the unused ballot. As each juror voted, he was given a token which he could redeem for his juror’s fee of 3 obols (one-half a drachma). (See Aristot. Ath. Pol. 68). After the voting, the courtroom attendants emptied the bronze urn in full view of both parties to the suit and counted the ballots. Whichever side received the most votes won (Aristot. Ath. Pol. 69)."

Now, our jury system is frequently seen as corrupt by way of "Jury Nullification".

More and more often, guilty defendants like O.J. are in receipt of a Deus Ex Machina by way "Jury Nullification".

Jean Pererson has to take MANY deals she abhors - in my opinion - because of this unfortunate fact.

They should at least pay for your parking. Also, they send people from or near Independence to the downtown courthouse to be jurors and people in KC to Independence.

Dat Jury racis, why we be gibben dem mo' monay?

Did Cordish, Ken Block, Doug Price, Polsinelli approve this wage increase? Doesn't seem like it would be good for the bottom line.

Parking should be provided for them also in a secure location at no cost. How about parking in an empty lot somewhere and shuttle those summoned to the front doors of the courthouses?

Then those who are in court for either a civil or criminal
case are charged the fees for the cost of the jury parking and so forth. If a civil case the loser picks up the tab and in a criminal case the party if found guilty is the one that pays the tab for the jury as part of the court costs.

Jury duty is no fun and at the very least they should be treated better and compensated better for their time spent.

What a great cast, and what an intelligent, thought provoking movie. Hard to believe they did it all without a single car chase.