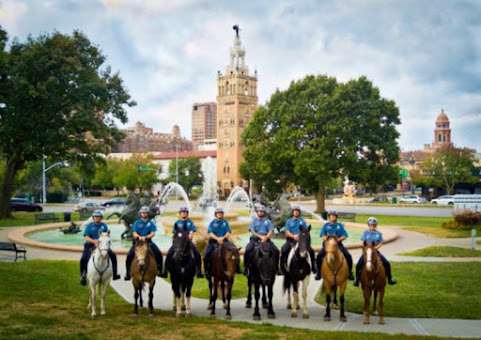 WILL HORSEBACK IN THE HOOD STOP THE KILLING?!?!?

The reality is that voters generally love this KCPD tradition and have ignored protester and animal rights complaints regarding cruelty. And so, here's a glimpse at the slightly readjusted mission:

"KCPD Chief Rick Smith told the Police Board of Commissioners at their meeting that instead of shutting down the patrol, they've decided to have them spend more time focusing on what they believe is the city's biggest problem -- violent crime. The department said patrols may be adjusted to proactively patrol areas with increased violent crime. Last year the officers did 40 patrols within the urban core."

The bottom line is that the horses are great for parades, crowd control and community outreach. While this solution has been celebrated, it ultimately kinda silly to expect police on horseback to catch crooks like the glory days of this wild west cowtown.

It would work better if the mounted police officers would carry swords and lances.

Horses love donuts too. Silver, Champion Buttermilk and Trigger will be happy.

Non-criminals love mounted patrol and so do kids. It's a positive image for police officers

Will the horses be commissioned officers like K9s and wear bullet proof vests?

We need more police dogs too!

Have the mounted officers carry six shooters and hand out a little old west style law enforcement and show these thugs how things are going to be around town.

be better off giving away the horse meat

If the officers wanna have a horsey ranch that’s fine but let them do it on their own time/dime.

-Radish down on the ponderosa

At least they're bot being sent off to that Golden Corral in the sky.


You need a prosecutor and judges who don't send criminals back out on the street plus more cops waaaay more cops forget the schools start spending on crime control.

Yeah. Horse shit on the streets of the ghetto should do wonders for the violent crime rates. Wait until Leroy and DeQuanto step in a pile in their new Nikes and see how many people get shot.