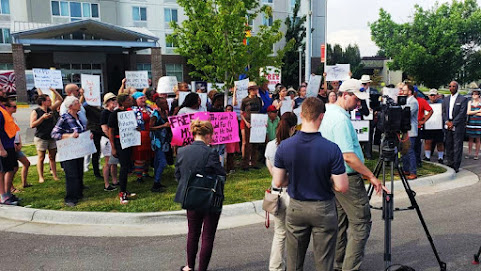 The KCK Chief has been accused of abusing power and he was recently forced to respond to accusations that have worsened with a debate over his freebie residence in a lake house owned by the Unified Government.

At the outset of the week we talked about this protest and now it's news fact . . .

And so as an ongoing lawsuit accuses KCK police of decades of corruption, sexual abuse . . .

SHOULD THE KCK POLICE CHIEF RESIGN GIVEN RECENT CONTROVERSY?!?

There's more political context here given that The Chief has A LOT of supporters and this ruckus over old school accusations fits in "conveniently" with a current war of words with WYCO DA Dupree.

For now, here's a look at tonight social justice demonstration in The Dotte:

They claim Zeigler is tainted through his history as the partner of disgraced former Kansas City Kansas Police Department Detective Roger Golubski. Golubski worked for KCKPD for decades, eventually becoming a captain.

Fox4: Protesters march in KCK against police misconduct, calling for Chief Zeigler to be fired

KMBC: More2 wants the Department of Justice to investigate the police department.

Wasn't he the old detectives partner at one time? At the very least, he worked with him at one time.

it's ALL political. There's also a profit motive here, probably a good payout if the lawsuit is successful so it makes sense to send protesters out there in order to tain the jury pool. Smart move if you stand to profit.

Send the MORE2 "protestors" over to College Avenue tonight around 2:00am.
There "social justice" expertise will likely be needed after the gunfights.
When you're a hammer, the whole world is a nail.

He’s white so naturally he must go, the koloreds don’t like whitey being in charge.

Anytime I hear any faction "demanding" anyone's job or resignation my reaction after I roll my eyes is 'yeah...whatever'.

Colin is a good dude, glad someone is paying attention and tracking what’s really going on, he is right though, the media will not report any of this. I knew within a day the shooter in Virginia was black just by typing in his name, they as far as I know haven’t put a picture of him or mentioned that he was black. I work with a large group of blacks and the first thing they told me was not to retire and then two hours later come back and shoot them, they were making a big deal out of white people mass murdering people until I told them it was a black guy, after about five minutes of calling me a liar I showed them his picture and they laughed and said they must have made him do it. Sad.

All the the protesters are either colored, lesbian or faggots, so their demands are worthless.

So what’s wrong with two good cops being partners? I bet they solved a lot of crime. That’s good. Right, dipshit?

They should be demanding the resignation of their colored, weak-dick, soft-on-crime district attorney. He is a worthless piece of shit.

Chief needs to go. He is not effective. Just look at all of the recent crime, obvious he does not know what he's doing. I may not agree with everything these people are saying but change is not a bad thing. Time for that in KCK.

The old timers are almost done in KCK. There just aren't many of them left. The Chief is a legacy of long ago. He doesn't know how to run a modern police departmet. I think if you ask around there are a lot of people who would like to see him find a new jobs somewhere else. That housing deal look awful, if he was smart he wouldn't have taken it.

Calling for the guy's job is just unproductive. Tell us how that would help? It seems to me that all it's going to do is create more Division and draw a line in the sand between police and the community. It would be better if these protesters would work with law enforcement in order to find a solution build trust. But that's not how you get news cameras to show up to your little fundraising event.

Maybe we should have asked More2 to risk their lives and protect the community. Will they stand up and do the job?

^^^^ People have a right to protest. You don't always have to agree with them but it's important to allow them the chance to speak. For the most part Chief Terry Ziegler has done a good job. These complaints have more to do with history of the department.

^^^^
Everybody has a right to protest, but when you get to the point that SOMEBODY is protesting SOMETHING each and every day, and constantly DEMANDING that something be done or that someone resign, all this just becomes background noise.
Most of these "protestors" and groups really don't even have a sound idea of the issues involved, make no positive well thought-out recommendations, and certainly have no responsibility for much of anything but their own "celebrity".
If they really wanted to accomplish something they'd work to learn the facts and details of an issue, formulate some suggestions and recommendations, and improve their communities.
They do NONE of the above.
Are there selfies yet?
Are we on TV?

All I know is Ziegler shows up for his paycheck,pension,and free house + reimbursements.

These protestors show up on a hot ass day for the constitution and justice.

I know whose side I’m on.

I’m a big supporter of our police but there has to be accountability.

The nitwits here who say “paid protesters” have no evidence or sense.

WYCO City Hall and Cop types stick together. They have very strong loyalty. They really do not care about what anyone outside of them thinks. They always get around everything. Believe me they are sitting around laughing about this. They are proud of their sleaziness. They brag about it. Many Star reporters have tried to mess with them and they all go down in flames.