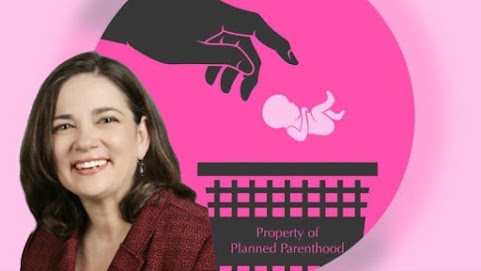 Across the nation and especially in Missouri, the debate over women's reproductive rights is reaching critical mass and now the discussion is part of the Kansas City Mayoral contest.

It's worth noting that Quinton Lucas is also pro-choice and even pressed the flesh among potential voters at a KCMO abortion rally.

IN THE LEAD UP TO THE KANSAS CITY MAYORAL VOTE, JOLIE JUSTUS MAKES ABORTION ACCESS AND WOMEN'S HEALTH THE CENTERPIECE OF HER CAMPAIGN!!!!

As she mentions in this clip, the mayor of KCMO doesn't set any policy when it comes to abortion. However her campaign is a political gambit intended to rally hardcore progressives, leftists and women's rights activists to her side.

Kansas City elections are nothing more than glorified, sophomoric popularity contests and campaigning on human misery which divides the nation and families is obviously a desperate move. Even those who support abortion rights admit that the practice is one of the most regrettable and tragic medical "procedures" that a woman can endure. Meanwhile, critics of abortion believe that it's outright infanticide and vehemently reject anyone who supports one of worst genocidal atrocities of the modern era.

Running for Kansas City mayor on abortion is a bad idea for Jolie Justus and reveals that her campaign has no real moral compass or clear vision for the real work that comes with the job.

From a practical standpoint, throughout this campaign voters have pushed back against candidates in order to bring NEIGHBORHOOD issues to the forefront yet both contenders continue to stubbornly hinge their election hopes on social justice posturing.

Hey now, KC is a democratic run town, this might actually win her the race.

They're both against Trump. This might make some snowflake heads explode.

Tough call for Kansas City, this one might depend more on personal relationships for some but this issue is a line in the sad for most people. Some voters like myself just can't vote for somebody who advocates for abortion.

One term mayor either way.

You heard it here first.

The biggest weakness in this campaign tactic is that old devil, Jack Shitt!

In that there isn't Jack Shit that the Mayor of Kansas City can do about Abortion one way or the other.

What Jolie is saying is that she wants the Blacks to keep killing over a third of their unborn every year, and, if possible, ramp that up.

That is her solution to the crimes and poverty problem.

And by the way, doesn't she work for the Tobacco Lawyers? Shook a Hardy Bacon? Didn't they try to defend cigarette companies, for YEARS, against charges of their product causing cancer?

She is a Naaasty Woman.

A bulldyke who loves butchering babies running on a platform plank that has nothing to do with being Mayor.

As mayor, they would both be pandering to the same groups, just not in the same order.

She isn't able to come up with a plan to address the atrocious crime issue here in KC so she's supporting murdering the unborn...Ironic, they are actually victims, too. And don't be fooled by the phrase "pro-choice", it's a poorly disguised euphemism for abortion. You're either pro-life or you support the slaughter of the innocents. Yeah, it's really that simple.

Since JoLie is for anti life then she supports keeping the murder rate higher and higher because murder is anti life.

Royals getting their butts whipped today. Tied with Baltimore for the worst team in baseball.

She would do better if she promoted the day after pill, damn shame people are too stupid to use it instead of abortion. It would save millions of dollars if the sluts would just use it.


Of course they are pro choice and against Trump they like to kill steal and destroy they are against anything American or Godly. The only heads that are exploding are liberal heads just look at the last election aftermath. Now that was funny. Liberals will have their heads explode when they see their taxes this year the result of liberals paying too much for houses and the very important GO bond compounded this year. That is going to be hysterical too. All in the name of liberals who are sooooooo smart......NOT.

Enjoy your new tax bills. Don't ask for anything from us though.

Jolie Justus uses a cucumber with a condom on it.

I'm Jolly Justus!! See! I'm happy, hence my name "Jolly!" ( Sorry, the sorta big money made me say that!") AND I stand for Justus! I mean "Justice" with a capital "Jaaay!"

My name even kinda rhymes with that "guy?" from Empire! And boy, is he ever famous! He did lots of stuff for justice! Did I tell you my name is Justus?!? Cuz, tween me and my friends, we all KNOW that like airports and hotels WILL fix all this stuff from pervious (sic) abominations, err, administrations.."

Everyone here knows the city jail is fiiiine, (no one goes there anyway,) and that you just gotta steer AROUND pot holes! You silly goose!

Oh that trash pickup thing, that was just a promise, not a law. So just do like ereone else and and load it up and put it in the dumpster behind your work. See? Problem fixed.. Bike lanes? I mean, half a Billion on some street paint is just a drop in the bucket. I mean a bucket in a bucket,, or do we really need buckets? I mean so like, the Green Deal is coming soon, Funky and Bow tie said so, so why are we like WASTING our time on sewers and things??!? They're nasty anyway..

Have any of you you met my wife??

And cuz me and Quentin talk about affordable housing and "accessibility', ("whatever that means," Author) after the resident (5k people) survey came back, they were interested in basic services... Roads, water, sewers, etc, but that stuff is not glamorous. So we're gonna concentrate on other things... New downtown hotel giveaway?? COOL!' Don't need it according to anyone willing to listen, BUT if we get done in TIME!' (Cue your inner Oprah) we could maybe put a name on IT!!!

Author: You people disgust me. As a LOYAL KC guy, living in STL, tho only BLOCKS away from Michael Brown stuff after ten years, I am moving back.. I've seen it all. Worked downtown STL for hrs, gun pulled on me in a parking lot, lived in Independence, one of the (NICER) parts. Had cars stolen, some chic punch me in the mouth at a convenience store, had a stolen ambulance from a NKC hospital crash into my house, lived right outside of Westport, Stopped a robbery, seen shoot outs on I-70 outta downtown STL, helped the homeless, sandbagged for the flood, mow the lawn for my neighbors who can't, taking a friend to 2 Drs apps tommorow, it goes on.

As a resident equally aligned w both cities, I refuse to have this post desecrated by ANYone who makes sandwiches for a living ...

My advance apologies to al, sandwich makers, especially the ones with the good bread.

G from KC in the STL

"Even those who support abortion rights admit that the practice is one of the most regrettable and tragic medical "procedures" that a woman can endure."

Wrong. That's a pretty stupid assumption, Botello. Keep your yap shut about abortion, except when it comes to your mom wishing she'd aborted you.

What a great campaign slogan. Damn. I support her but wish she did not go this route.

humanity can claim to be 'pro-life' all they want and still be damned.

Don't comment on you own posts buddy, it's sad.

Justus is a proponent for abortion. A procedure she'll never have to worry about. Is the graphic behind her tossing a baby in a Planned Parenthood trash can?

Why the concern about pregnancy unless she gettin a little sumpin sumpin on the side?

I like Jolie and voters must understand where she is coming from. She fought Republicans for years in the Missouri state senate. She will be a great advocate for KC.