TKC QUESTION!!! SHOULD YOU SPEND $500 AT A KANSAS CITY FIREWORKS STAND?!? 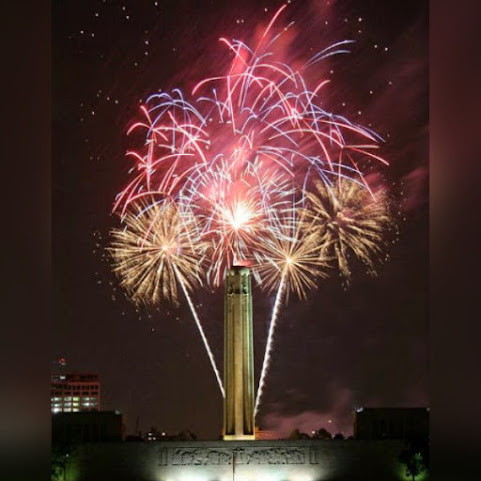 Over the past year we've heard advocates of "affordable" housing argue against paying landlords rent and bemoan taxpayer inequity in Kansas City impacting the working poor.

Their criticism is apt and often hard-fought in a town desperate to finance just about any development scheme espoused by hipster charlatans wearing cheap suits.

GIVEN SO MUCH OUTCRY OVER THE RISING COST OF LIVING IN KANSAS CITY, WE NOTICE THAT LOCAL FIREWORK STANDS ARE PACKED WITH FOLKS SPENDING BIG BUCKS TO WATCH THEIR MONEY GO UP IN SMOKE!!!

Small-time consumer fireworks are nearly the equivalent of burning money.

Don't get it twisted, it's your cash, do with it what you will. After all, a trade war with China could make this the last fireworks season locals are able to enjoy. This blog is in no position to offer financial advice. We're merely pointing out a contradiction and logical inconsistency.

It's a proud local tradition to politely ignore the fact that fireworks are illegal within Kansas City, MO.

Police offer a cursory, half-hearted warning but usually don't drag anybody to jail for simply igniting fireworks given all of the celebratory shooting and rolling gun battles they are forced to confront during 4th of July weekend.

Our elected leaders have already given out street permits to block roads so that politically connected locals can blast away their streets and possibly make a new batch of potholes.

And so TKC will likely just spend the night curled up in the basement clinging to a hose, wearing earplugs and clasping a slushie (like most Summer nights) . . . We don't wanna rain on anybody's parade but simply wish to point out that there are a BUNCH OF FREEBIE KANSAS CITY FIREWORKS DISPLAYS.

Also, to be completely honest we must admit that nearly taking off one of our typing hands with low-grade loud boom-makers to commemorate a tax revolt by a bunch of slave owners was part of TKC's upbringing. HOWEVER, as a recession looms and the partisan political debate grows more vicious, it's important to realize that spending 500 bucks on fireworks DOES NOT make a Kansas City resident any more patriotic than their long-suffering neighbors.

Will our readers spend BIG BUCKS simply to make a big boom???

Overall, sort of agree but don't forget that a lot of local fireworks stands donate their proceeds or at least a portion of proceeds to charity.

I can live with fireworks, it's the celebratory gunfire that needs to be stopped. Waste your money, don't risk the lives of other people.

KC tradition, drunk and shooting off guns and fireworks.

Best in the Midwest, baby.

It's a middle class country; let them buy the fireworks while they enjoy their freedom.

Poor people can't afford to be doing stupid shit with their money.

When you cash that welfare check on July 3, are you going to indulge in some sparklers and bottle rockets?

"Poor people can't afford to be doing stupid shit with their money." You know Funkhouser, you really are stupid. Rich, poor and in between do stupid stuff with their money daily.

Ever notice how the poor people are covered in tattoos and always have the newest most expensive phones.

So fuck you Herr Funkhouser.

Byron , Are you feeling okay? Serious.

Fireworks is the best use of your freedom.

TKC QUESTION!!! SHOULD YOU SPEND $500 AT A KANSAS CITY FIREWORKS STAND?!?

No; but it's certainly better than spending $1 million on a moronic Open Spaces festival.

At least fireworks gives you fun memories with your family. Open spaces was nothing but a bunch of hipster patting themselves on the back!!!

Buying fireworks is burning your hard earned money up in smoke, and just like any holiday, the rich get richer and you, if you are lucky get the day off!!

There's nothing worse than telling other people what to do with THEIR money! It's THEIRS, not yours!! Shut your mouths, mind your own business and fuck off. Not everyone is as broke, busted and bitter as you losers. Do we bitch when you geezers come in to the store and buy all that cat food?

And not everyone claims to support MAGA but goes out and spends their cash on growing the Chinese Economy.

Save your money for your Property Taxes coming up.....or you might be shooting fireworks from a tent next year....