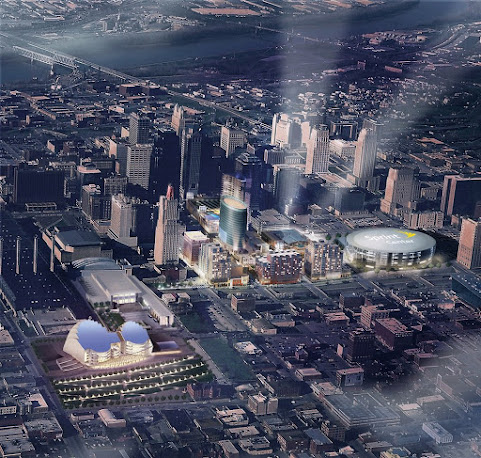 Theresa Galvin is the 2019 Jackson County Legislative Chair and this week MSM politely ignored her losing it on an allegedly foul-mouthed constituent complaining about higher taxes.

Luckily, AWESOME TKC TIPSTERS are always vigilant and think that her statement on the property tax crisis, an ensuing tantrum and the entire scene is worth a quick peek.

Take a look and note that we excluded a shot of the allegedly naughty resident because it's unclear what he said and it's probably not important anyhoo . . .

Now, as this crisis continues we notice anger from the public escalating and it'll likely reach the boiling point when it becomes clear that legislators aren't going to do anything. Instead it's obvious they plan to weather the storm and hope voters forget about the high prices a few years from now.

That's unlikely but it also leads us to the bigger picture . . .

COURTHOUSE INSIDERS THINK THIS PROPERTY TAX FIASCO HAS THE POTENTIAL TO STOP DOWNTOWN PROGRESS AND DISSUADE NEW RESIDENTS FROM LIVING IN KANSAS CITY!!!

"Look how horribly this entire episode has been handled. There's no rhyme or reason to it. Homeowners were delivered a huge bill and very little help from the county outside of a few bull sessions. This this is so bad that it provides a wonderful example of why people should think twice about moving to KCMO inside Jackson County. There's no accountability and now the cost of living, a main selling point, is steadily climbing upward, too. Add that to all of the other problems a homeowner has to confront and the upside to living in KC has been heavily discounted. We've done a pretty decent job of getting people back Downtown at quite a great cost. This property tax mess might ruin that progress."

For the latest, here's further reading on the topic . . .

Jackson County says the reassessment of 15,000 pieces of property are now being disputed."We're now looking at the entire Westside," said Gail McCann Beatty, the county's director of assessment. On Tuesday, the county clarified its plans for the neighborhood.


Jackson County property value hikes are too much, too fast. What can you do?

Assessments on single family homes in Jackson County were up 18 percent on average this year, but some are far higher. But county officials say you can steps to challenge the increase and avoid a bigger tax bill. The national debt, at $22 trillion and counting, amounts to over $67,000 per person.

Kansas City's Westside neighborhood is growing and changing due in part to gentrification. Some residents worry that the higher property tax bills are threatening the Mexican-American culture of the area.The older homes in the Westside that have been redone, the brand-new homes coming in are driving up Westside land values.

Thousands of Jackson County homeowners are waiting for the county assessor's office to look over their informal appeals applications challenging the accuracy of their property assessment notices. According to a county spokesperson, as of Monday afternoon, more than 15,000 applications had been filed. Angie Splittgerber is among the homeowners who appealed online.


Part 7: Whistleblower says Jackson County did not use full MLS data on assessments

KANSAS CITY, MO (KCTV) - There is surprising new information about how appraisers may have determined the value of homes in Jackson County, and the lack of information they had available to them. It comes from a whistleblower inside the county who calls the assessment a colossal mistake and decided to share inside information directly with KCTV5 News investigative reporter Angie Ricono.

Of course people should think twice about living in KC.

There's a lot that a homeowner has to deal with and now they're subject to a 300% tax increase on top of it. That's illegal in other municipalities. And governments aren't brazen enough to try and get away with something like that.

I hear Parkville is nice.

They call it flyover country for a reason. Don't necessarily agree with the comment about living in KC and the impact this will have. Real estate agents can be very persuasive. I'm sure they factor in these things. Most people in KC live here because their job or their family is here. Outside of that, this city has always been a tough sell. And yeah, it's not a cheap town any more.

Gail Beatty is incompetent. SHE SHOULD BE FIRED.

Gavin doesn't even own property in Jackson County per record. Interesting.

Beatty is just an political hack who drifts from one taxpayer-funded job to the next.
Elected to a position and stays as long as possible, OR moves to some appointed job if that comes along.
The same kinds of folks schmooze corporations and sell out the public's interest, and, lo and behold, get cushy jobs in the private sector.
Competence has nothing to do with their "success".
Nor does having accomplished much of anything other than looking out for themselves.
And Jackson County and KCMO are full of these leeches.
Those low-turnout elections work every time!

^^^ It's listed under the hubbys name.

They sorta figured it out for y'all.

Because you folks couldn't find your nose with both hands.

Theresa Galvin is a professional businesswoman. She spent 30 years in business management within the construction industry. Theresa is now dedicated to serving the constituents of the Sixth District full time.

Just wanted to THANK YOU DEX for this great post. You absolutely nail it and wanted to know that your comment is appreciated! Thanks for the second shot T.

Gavin doesn't even spin and lie well. I'll give her an f-.

I wish the executive would answer some questions instead of just hiding in his office. He seems negligent in fulfilling the duties of his office.

Hopefully they'll all burn in hell for this.

“The constituents are my bosses. I don’t look at this as a job. I really love it,” Galvin said.


LOL well she lies which is nothing new in this shit hole political scene.


Miss Galvin how in world world do you...... " see what someone said?" and further more the properties in Jackson County have NOT been under valued and that can be proven! You people are nothing but corrupt and are LIARS!

Miss Galvin maybe you should leave and come back when you get some intelligence you are a half wit.

And to think that it's guaranteed that KCMO dipshits will overwhelmingly vote to renew the earnings tax when it comes up again in a few years.

Just breathtakingly dumb are the rubes in this town.

Try to save KCMO from bankruptcy by bankrupting it's citizens.


Wow what a plan.

Write a check for what you assessed my property for and it is yours!

They won't have to vote the E-tax in again in a few years. The stupid voters gave that a 20 YEAR EXTENSION.

Stupids also voted no on the recent attempt to cap tif giveaways.

The only surprise was the turning down Slie's pre-k tax. Musta been a mistake.

I ask neighbors their opinion only to find, time and time again, they have no fucking idea what's going on. Typical for democrap run cities.

Now it would appear Clay County has learned a lot from their South of the river peers (crooks), and is becoming more corrupt by the month.

Part 7: Whistleblower says Jackson County did not use full MLS data on assessments

I love how the Legislators took all the heat during this meeting. Legally there isn't anything they can do. The county executive has all the control including over assessment. But Frank White didn't say a word this whole meeting. He just sat there with his back to these people the whole time.

8:47 AND DON'T FORGET FRANK WHITE!!! He's the damn county executive. The buck is supposed to stop with him. Instead he ducks responsibility all the time. What a sickening display, him just sitting there like a lump.

So what did the county get for the half-million dollars plus it spent on a consultant to make sure it got assessment "right"?

Theresa Galvin is a lying piece of shit.

I wish people would take the time to learn how local government works. You can get pissed at the county Legislators all you want. It's the useless executive who is responsible for this fiasco.

Frank White couldn't even give these people, citizens he's supposed to be serving, the respect of turning and facing them as they spoke.

Who the hell knows if all the Kcorrupt Kcrumbling Kcrimmie Kcowtown Killa Shitty vote tabulations are legit in all elections. There are growing concerns by firms that make, lease, and sell the electronic voting devices that their products are DEFECTIVE, and can be prone to errors, and some specific models have been proven to be hacked. They are urging replacements be made before the 2020 POTUS election, PLUS added PAPER BALLOTS systems linked to these new wifi ballots systems. Some locales are in favor of PAPER BALLOTS only used for tabulations. The hard copy method is said by the "tech experts" to be better ASSURANCE OF A VERIFIABLE MEANS WITH FAR MORE ACCURACY OF VOTE COUNTS!

I was in the room and never took my eyes off the back of Frank White's head. He never so much as glanced back at these people. He's either an arrogant a-hole or complete coward.

Part 7: Whistleblower says Jackson County did not use full MLS data on assessments


Well KCTV 5 pretty much blows her bullshit right out of the water.

Thanks a lot slie and frank. There also was a major news outlet with the headlines of , housing market slowing down. Prices dropping. Jackson co and kcmo will be a ghost town if the economy starts to fall. Lots of vacant apts and hotels.

Gavin - What a true white bitch, I bet she eats pussy for lunch!! FUCK KCMO, and FUCK JACKSON COUNTY, the CORRUPTION CAPITOL of Missouri, and if you work in KCMO you should find a job outside of not only KCMO but Jackson County as well - do that and you will get less fucked in the ass!

Kc bait and switch. Come for the streetcar, stay for the taxes!

My opinion, and that is all it is, is this. First learn all you can about the process of assessment. A rise in assessment does not necessarily mean a raise in property tax. Every taxing division within Jaxco will determine their mill levies which then relates to your actual tax bill.
Second, Since the deadline is passed then start with your last tax bill and find those entities and start lobbying them to reduce their mill levies by at least the percent of your assessment increase. That is how you stop your actual taxes from going up.
Third, get to your state legislator and lobby them to support new legislation to limit the impact of reassessment increases to no more than 5, 10, 15% per year. That way even if your $20,000 home is reassessed at $250,000 they can't increase it by the legislated limit per year giving you more control.
Fourth, sue the shit out of every agency that increases their mill levy.

11:23 Why on earth would you name spoof Mark for such a childish, disgusting comment?

Mark would never use such language.