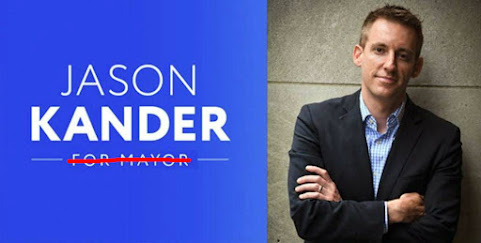 A very brave interview that will hopefully help so many people struggling with PTSD.

KSHB: Jason Kander opens up about dropping out of KCMO mayoral race

During the interview, Holt asked Kander if there was a moment he realized he had to get out of the race.

“I was in the kitchen and crying pretty uncontrollably, and I wasn't crying because I had to get out of the mayor's race, it was just the realization, 'oh, I got wounded over there,’” Kander said.

There are leaders and there are followers. It's been interesting to watch this young man devolve into a follower.

^^says the follower who has never lead anything. Hard pass on your opinion bub.

Paper cuts are a bitch! Hahahahaha!

Wasn't his wife there to "influence" him not to cry ? Such Jew cunt bullshit !

Proving once again how easy it is to con the big-time sophisticated coastal media.
Holt stopped by KC a while back to slum around and show how much he was interested and learned in about 15 hours.
Pander just can't stay out of the limelight and anyone who knows the real story of his "heroic" military service and his cowardly retreat from the KCMO mayor's race won't buy any of this most recent crap.
He's really a phony.

Fake soldier with fake affliction. Shuffling papers and riding in a Humvee one time with soldiers who had rifles (his story) does a dishonor to those who served in harm’s way. Other than that, typical politician.

Did he get a Purple Heart when years after he returned he realized his vagina was hurting?

Hate to admit it but the trolls are right...met his wife who writes books about starting companies that she could have never built...she just put a list of lawyers online and sold it to some smuck

I watched horried as my neigbors dog got ran over by the trash truck today, his brains were all over the street! I am feeling some PTSD! Here is the thing PTSD is a REAL thing for our military people, but in this case I think PTSD is being used as a exscuse backed and if not ordered by corrupt politics. I never liked Kander I thought he was fake fuck from the beginning, I respect the fact he served our country (if he really did) but If he has PTSD from being in the military, he had it when he left the military, this people is how political BS works, for some reason he needed a exscuse to get out of the race, and he used PTSD to do it, what a true mother fucker!!!

Anyone have any Arizona ocean-front real estate for sale?
Give Lester Holt a call!
What a clueless boob!

Would somebody tell me what he did over there that gave him PTSD? I mean, did he kill some civilians or rape a kid or what?

Jason Pander served in Afghanistan for a maximum of roughly 3 months.
He sustained no combat-related injuries.
His role as an "intelligence officer" was to investigate Afghani corruption (chasing paper trails), which is a way of life there. Afterwards, he described his time there as accomplishing nothing.
At the time he claimed Depression and PTSD he had been away from his brief Afghanistan service for something like 10 years or more.
To explain his unexpected withdrawl from the Mayor's race, he fell back again on his military service, as few would question it. Strange that he had just been on a book tour promoting his faux heroism in "Outside The Wire."

If this A-hole thinks he's going to worm his way back into political office after publicly saying that he considered suicide multiple times, then the public will be told the real reason why he dropped out (was forced out). Pander is corrupt, a liar, has a history of depression that pre-dates his military service, bribed the Carwash family for an endorsement, and has personal attributes that he wishes to keep hidden.