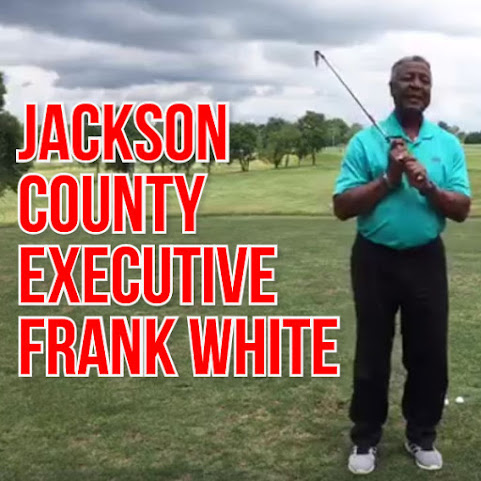 Over the past week, drastic property tax increases across Jackson County have sent homeowners into a panic.

"Most of Jackson County is steaming mad about property value reassessments. Frank White hasn't had much to say at all about this or anything else really. But he does have time to make to a 12-minute video all about getting tips to improve his golf swing from the county's golf pro? It's posted on the official county Facebook page.

"The county is broke but can still afford a golf pro? Frank doesn't have anything better to do as county executive when we're paying him nearly $150K a year?"

Check a screen cap of the live video that's still on Jackson County's website as of this writing: 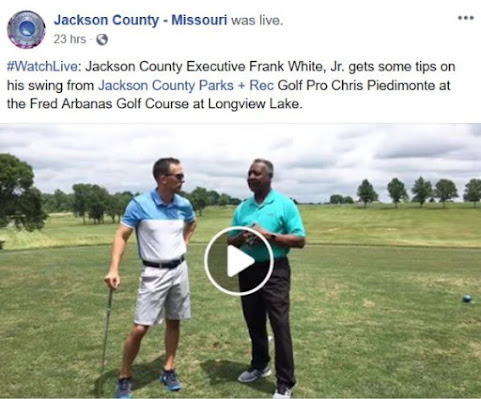 Locals are reeling over the amazing disparity that exists among current appraisals and the slap-shot process altogether.

Many neighborhoods are convening emergency sessions to help homeowners contest their assessments that many believe are unfair.

Again, the Jackson County Executive has been mostly silent this crisis that will force many residents out of their homes. Locals struggle to get answers from the Courthouse and their political representatives as deadlines quickly approach. Meanwhile, Frank White seems immune to criticism and hard at work on his golf game.

Glad that someone sent this your way. It's one of the most tone-deaf displays I've seen from any politician. Presidents can play golf, we expect our local leaders to have a much better work ethic.

He has been playing golf for most of his term. I guess that's why he hasn't had time to pay his own bills.

1:12, Der Fuhrer constantly criticized Obama for playing golf, saying he would be too busy. He's already played more golf in 2 & 1/2 years than Obama did in 8.

And you know this how Byron you huge ass loser?

Because it's everywhere douche bag. Get of Faux News and get out of your bubble for Christ's sake!

The only place in the world you see douchebags is here and 1:35 proves such.

Unless he's missing important meetings or not making necessary decisions (of which there is no evidence), I see nothing wrong with taking an hour or two for golf. People may be pissed about the the reassessments, but that does not automatically require him to be chained to his desk.

Apparently the record holder for most golf played by a president is none other than that progressive icon Woodrow Wilson. He played 1200 rounds while in office, and not to forget he was incapacitated by a stroke (not a golf stroke) for more than a year while his wife largely assumed his duties. https://www.washingtonpost.com/history/2019/04/06/this-president-played-more-golf-than-any-other-its-not-trump/?utm_term=.d1765a15956a

Eisenhower is next with 800 rounds. Obama and Trump are pikers in comparison.

Politicians shouldn't play golf. I will say this post is good news. Very few people have seen or heard of Frank since all of the property tax questions started. At least we know where he is if we need him!

This is a witch hunt.

If Frank was a stable genius, he would buy his own course and funnel taxpayer funds to his own pocket.


Here you go 2:41. Point proved. That's only three sites! Do your own fucking research. I'm calling you, and your lazy president a loser.

Obama got more popular the less he was seen. Facts elude your tiny brain.

Hope he's a better golfer than he is Jackson Co. Exec.

What is the big deal? When politico's are out on the golf course the only thing they are screwing the taxpayers out of are green fees and the cart fee, maybe lunch and drinks. They do a hell of a lot more damage when in the office actually making bad decisions.
I'd rather they play bad rounds of golf than find ways to take more money out of my pocket.
FORE!!!!!

Glad we're spending all that money to keep Frank's crackerjack PR team working, so they can put out vital info like this.

The giant rise in reassessments is only happening because we're 3.5 years away from re-election time.

embarrassing for Frank. He should know better. Somebody please hold on to this photo.

Hey bLIEron, here’s the facts as of January this year, stupid muthrtfucker.

Friday marked Trump's 729th day in office. January 20 marks two years since his inauguration. Over two years in office, that equates to a neat 35 confirmed rounds per year in office. According to CBS News White House correspondent Mark Knoller, Obama played a total of 333 rounds of golf in his eight-year presidency. That averages out to about 41 rounds per year.

Read it and weep bitch!

The small problem he created was ridiculing Obama for golfing and promising, even bragging, he would be too busy to golf himself. So, Trump is a again a proven liar. Big deal. A small problem since we all know that already.

The much bigger problem is where he is playing and who WE are paying. Obama worked golf around his regular schedule. He played over half of his games on military bases. No extra costs involved.

Trump is using Air Force One as his golf cart to fly special trips to his own courses in New Jersey, Florida, Ireland and Scotland. The secret service are shadow caddies as they have to screen country club members away from unsecured facilitates. The golf, security, and overnight stays are billed to the government by Trump properties and we pay Trump's companies for his stay at his own resorts.

Every trip is a constitutional violation - using his time as President to directly enrich himself. It doesn't get much swampier.

^^^But don't worry, we wouldn't hear shit if Obama did something similar.

^^^Actually the lefties and the media would praise him for setting such a good example for all Americans to get outdoors and exercise.