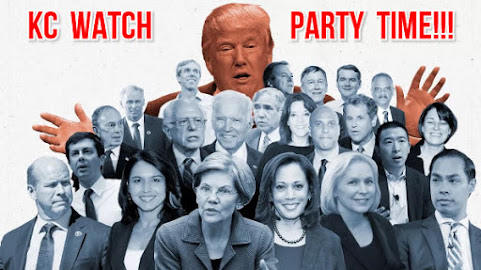 Right now our Jackson County Democratic Party pals politely ignore the property tax and jail crisis occuring in their own backyard and focus on the march to defeat President Trump in 2020.

Here's the schedule and just a few gatherings mostly around Midtown and some of the nicer suburbs . . .

The first Presidential debate, which spans over two nights, this Wednesday and Thursday, featuring the top 20 candidates. Here is how they will be divided up:

Volunteers and supporters for a number of campaigns are hosting debate watch parties all around the metro. Registration and rules may be different depending on the host. If you know of other parties, please let us know so we can promote them. Here is a list of what we know about today:

-Senator Bernie Sanders has a number of parties around the area.

-Vice President Biden will have one volunteer run party on June 27.

-Mayor Pete Buttigieg has two parties in Overland Park and one in Kansas City. Click here to RSVP and get details.

-Senator Elizabeth Warren has one event in Shawnee, one in Kansas City and one in Independence. Click here to find the one closest to you.

-Senator Kamala Harris has one event in Overland Park. Click here to RSVP.

-Senator Cory Booker has one event in Overland Park. Click here to RSVP.

WILL TONIGHT'S FIERY DEBATE WEAKEN DEMOCRATIC PARTY RESOLVE AND DAMAGE THE 2020 CONTENDER IN MUCH THE SAME WAY BERNIE BROS HOBBLED HILLARY IN 2016?!?!

Of course Prez Trump has his problems but to deny his enduring popularity is to ignore American political reality and write-off at least half of all voters. 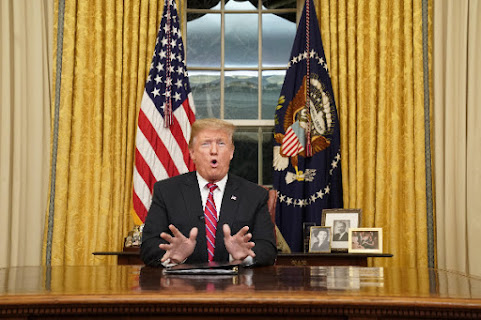 As we look on tonight, let's not forget that Kansas City exists as a Democratic Party stronghold in the middle of two very "red" states and that might skew some perceptions. Nevertheless, as progressives now make inroads into Johnson County, there's hope to build upon the "Blue Wave" in the Midterm election. There's also a very obvious concern that no real Democratic Party leader has emerged to challenge the President and all of these fringe candidates might only hurt the chances of the eventual 2020 Democratic Party Presidential nominee.

Vox: The 25 Democrats running for president, debate lineups, and everything else you should know about 2020

Time: Why the First Democratic Debates Will Force 2020 Candidates to Get Serious About Immigration Policy

Politico: The first Democratic debate -- Everything you need to know

the "bernie or nobody" wing of the party is not helping them. Socialism will not sell to the public. It's a losing fight and a destructive one that that.

Just a couple of points behind Joe Biden and all of this inherent flaws.

The winner is Kamala Harris. And then President Trump by a 49 state margin.

What will really determine the outcome of the 2020 election, is Trump keeping us out of war and an agreement with the Chi-Com scum over tariffs.

If Trump can accomplish that, then we get 4 more years of freedom before the inevitable shoe/ax drops. Demographics IS destiny. Our last hurrah, before the Socialist Utopia is at hand.

The Democrats will, over the next decade, force whites into diminished roles behind the scenes and in combination with demographic change ascend to dominance in a one party system that will negate the Constitution (Guns, Free Speech, Search and Seizure will be up first.) and subtly (At first) replicate EXACTLY what the Chi-Coms are doing in Mainland China today. It will take about 10 to 15 years, before Tony does serious time in prison for the blog he now runs. Ex Post Facto convictions (Now all the rage on the left, even Joe Biden is a racist.) for decades old transgressions will cower what is left of actual patriots into submission in the New Socialist/Fascist America.

THIS is the future that the Democrat/Fascist/Socialist party of "Good Whites" and the Politically Correct "Victims" of the evil White Patriarchy seek for you and your children.

The white demmocrims are using the black peoples power play, scream holler, destroy everything and wreak violence upon the country to get their way. I do believe that white politicians are getting pushed out and hence all the violence now, blacks have no self control and will kill you because of your skin color and beliefs.

The election is a year and half away. At this point, you can pretty much ignore everything a pundit or analyst says.

Still, it might be worth watching this freak show just to see bad and/or entertaining behavior.

These watch parties are a bit of an oxymoron. The point of the debates is to help you decide. The only thing I am certain of, at this point, is that I will vote for the Democratic Nominee in the General Election, & a woman in the Primary Election. I haven't decided which one, & I don't intend to even think about it very much this early in the game. I won't be watching.

Screw the "debates." The questions and answers are all too predictable. Instead, watch Vanderbilt vs. Michiganmin for all the marbles in the college world series.

Welcome to my Shitty! All these visiting luminaries get a pass on paying taxes!

So if Trump loses, does this apply to him?

You are fucking retarded, Byron.

10:54, Byron's likely to have a massive coronary from all the MAGA winning after 2020 so we may be rid of his racist libtard ass soon!

AND THE TAX PAYERS ARE PAYING THE BILL

You will have twenty of the most corrupt politicians in one room many of them were tied to Hillary and the Corrupt Obama administration. Enjoy the Show

Who is in charge of waking Biden up before the debate?

Fuck those debates! Those joint television availaibilities will be boring tonight and tomorrow. No reason to watch.

NOW on the other hand, the TWITTER slap fight between Steve Vockrodt and Kevin Collison over "incentives" is pretty good. It is going right now. Allegations of low ethics standards, and denial of corporate welfare to The Star have already come up.

Vockrodt seems intent on making sure the entire Star Editorial board knows that his tongue is ready to clean anuses now and into the future.

AWW too bad none of you geezers will be awake to watch the debate. Remember it's lights out at 1800 sharp! You all have a big day tomorrow of doing nothing, shitting yourselves and crying about everything. Oh. don't forget Matlock! You all love the Matlock! Nighty night now.

^^^ Maude’s on why aren’t you watching it dummy

OMG That is a slap fight with Collison and SackRot! lol

This is gonna' be fubar and a clusterfuck.

Hilly gave the 20 debaters some of that NO WAYZ TARRED hot sauce she keeps in her purse! said...

Aww, you gayzers will be watching and jizzing on yourselves FOR TWO DAYS OF DUMBOCRAT DEBATES!!! You believe your degenerate DEMOCRIM heroes who promise to make erruhthang FREE and that they'll force errone to be lovers of LGBT!!! Nevermind aborting U.S. babies by the billions for FIVE DECADES, the DEMONRATS want your tax dollars TO PAVE A GOLD BRICK ROAD FOR "CARTEL FLEEING REFUGEES" AND "UNACCOMPANIED CAGED KIDS", because abuse, violence, and death is not acceptable (and, you know, more DUMBOCRAT voters flooding in).

You gayzers want to vote for all 20 of the assorted fags, hags, pedos, and pretenders. True, most gayzers really favor Petey Buttplug. Mainly, because he's a gayzer. Also, because Buttplug loves watching Maude, just like you!!!

Does Saturday Night Live even have enough cast to portray 20 debating doofuses?! said...

The Dem debates' political cartoons and snark posts ought to be hilarious.

SO many clowns in the room at the same time. They must be the opening act for the circus.

Yes having 20+ podiums on the stage will be a bit of chaos. But it’s WAY better than ‘16 when the clintons cooked it and chased away all potential challengers. Ask yourself why the heck didn’t Biden run last time? Or booker. Or warren. Etc. it was because the clintons looked out only for the clintons and they locked up the DNC, froze out anybody from hitting up the major donors, etc etc.

And the funny thing is after that strategy got punked by trumps historic campaign victory, Hillary blames her loss on ... Russia!! LOL.

And yes I know the plural is podia but let’s not be total dorks.

^^^^Why do you feel the need to tell us what you like, what you don’t, who you’ll vote for etc.??? Who gives a shit? Your life is boring as fuck! Here’s a clue, nobody gives a shit! Blah blah blah all day long! Here’s clue number 2: when you open your mouth, and people walk away....you’re fucking boring! Delete your account.

Because it is a comment section on a local affairs blog, is why I made a comment. Comments often relay an opinion. I don’t wish to have conflict with you, friend.

I hate to agree with Radish but he's right. HRC was bad for the Democrats last go around. The way she shit on Bernie pretty much highlighted how bad she sucks. She's intelligent, articulate, all that but she's not a good person.