His unique Guitar Lamp creations have earned international acclaim and they're coveted by hard rock music fans across the world. Now, the music dude is making a return to the Johnson County political scene in EPIC fashion.

Over the past year sketchy public art projects and swimming pool community center drama have sparked resident frustration and now inspire the local rocker to return to the municipal fray.

Dan Leap: It’s official! I will run for Merriam City Council in the 2019 election. 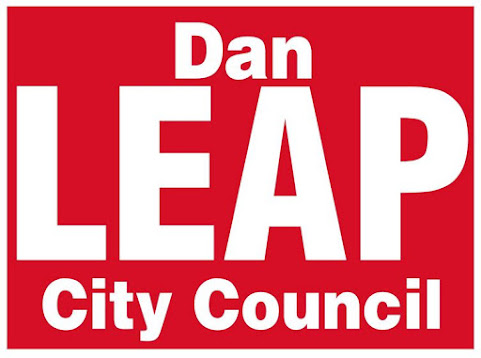 Years ago, I served two terms on the City Council. After that, I stayed off the public stage because, like many Merriam residents, I trusted others to use good judgment and represent the interests of Merriam residents. As we have all discovered, that trust has been egregiously betrayed. And that's why I am running now.

Much changed since I last served. Some of the changes have been good, but many have been terribly wrong. The quality of life in Merriam has degraded, while the cost of living here has gone up. And that's not right.

My first priority as your new councilman is to listen to your wishes and concerns so that I am representing you instead of representing the other council members. This is a huge change from the status quo.

My second priority to ensure your hard-earned tax dollars are used wisely. This is another huge change from the status quo. The appalling waste of money (e.g., an ugly wind chime sited in a high noise area at a cost of $123,000) while our basic needs are not met is a slap in the face to every resident. We need potholes repaired, drainage issues resolved, and deteriorating train tracks repaired properly. Those are but three items from a long list of neglected needs that tax dollars are supposed to be used for.

If you want honesty, integrity, and positive change in our city government, your choice at election time is clear.

Please continue to watch for updates about my campaign. I thank you for your continued support!
########

Good for him. Nice to see people who care about their community but aren't "professional" politicians.

Could you PLEASE RUN FOR KC MAYOR?

Dan is more normal than those who claim he isn't.

He is Merriams Trump, good on you dude.

Boy oh boy, if they could only be a part of KCMO. We have a giant wind chime which cost us $120 million. It was also a bait and switch, also. Our road maintenance funds and police funding were deferred to pay for the 18th and Vine/Jazz museum with more to come...

I WANT A ROCK.

^^Or retard...do you want to rock, not want a rock? A true rocker would know, a retard would fuck it up like you just did.

Good for Dan Leap. I hope he is elected!

^^can't she's in Paris with friends living her best life. You're here.

So? What happened? Did he win??

Whitney Yadrich won. It was a NASTY race.

Dan is stubborn. And reckless. His time as an elected is over. One, his opponent wisely brought up how 8 years ago, Dan Leap put his opponent's address on FB when a supporter offered to burn down the opponent's house. True, he took it down, but he was STUPID to have ever done that.

And two, he insulted and offended Jay Senter, publisher of Shawnee Mission Post. Who did the great debates and questionnaires. Even refused to spend $6 a month subscribing to the ONLY newspaper we have in Joco, albeit an online one. Lesson, you don't get into a pissing match with someone who "buys electronic ink by the daily carload."

Oh wait, and three, Dan Leap was rude and disrespectful to the man who built him a free website. For not returning a call or performing yet another FREE task overnight.