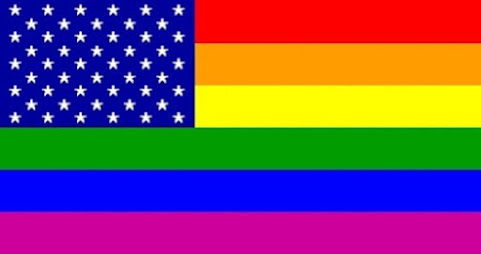 Despite the best efforts of corporate interests and promoters, Pride Fest is about more than good times.

The Pride Month kickoff event in at Berkeley Riverfront Park in Kansas City, Missouri, was filled with live performances, games and food. But some in attendance wondered why state lawmakers did not add protections for LGBTQ members when it comes to state law regarding discrimination in employment and housing.

“The Republican super majority (in the Missouri legislature) have not allowed a vote to happen on a very simple bill that says you can't fire someone from their job because they are LGBT," Rep. Greg Razer said. "That is basic civil rights."

Razer is one of four LGBTQ community members in the Missouri legislature. This session lawmakers did not put his bill up for a full vote before the House of Representatives.

More importantly, with the start of "Pride Month" and this town's first openly LGBT contender for mayor facing an important election . . .

IS KANSAS CITY AT THE OUTSET OF AN LGBT REAWAKENING?!?!

Old school denizens might remember that the LGBT community was far more militant and pushed back against both Conservatives and the Democratic Establishment. Now, was "the movement" becomes more mainstream . . . It seems like a very real power grab is underway given the political maturity of the community.

And all of this inspires our playlist for tonight and a preview of local political reality . . .

Won't make a difference in Jeff City. In fact, they might lose votes because of it. Sorry, but selling that to rural Missouri just isn't going to happen for a long time.

With the exception of Joplin, of course.

If someone doesn’t want to rent their home to a dysfunctional transgender couple why should there be a law on the books saying they face jail if they don’t?

Kansas City's gay community is not like that of other cities. I say this as a gay man. Are there any normal gay people in KC? I've come to the conclusion that the normal gays here stay home.

What makes them think, oh wait, this is probably another one of those set ups for money, never mind.

Don’t you just love when a liberal faggot thinks everybody should conform to their “special rules” and not what everybody else lives by.

Saw a large crowd down at KC Live block, was that part of the pride celebration? anyone know?

I bet Lucas was down there, he’s queer and just busting to come out!

" Are there any normal gay people in KC? "

I have never fired an associate for being gay, nor would I ever, because I am not stupid enough to hire one.

A normal gay person? There is no such thing. A normal man would never suck a dick or get buttfucked.

1:54, ditto. I’m gay as well and my circle of friends wouldn’t ever go to Pride or anything else like it. Being gay is not our defining characteristic. We prefer to be judged by what kind of people we are and not what goes on in the bedroom. I think a lot of minorities are their own worst enemy because of things like Pride.

When do the hetrosexuals get a whole month dedicated to just them?

It's all this marketing that is twisting our youth into thinking this is normal behavior.

Corporations and retailers have taken to promoting this simply and only for what any money they can collect in profits from this event. They may not believe in it but they believe in the all mighty dollar they can collect from it and that just adds to the hype of it all.

Pride Month isn't all about some unbalanced people, it's all about who can reap the most cash out of all the events that are supposed to be supporting it.

When do the Witches of America get a whole month that's all about them?

When do the so called Christians an organized group who have been around longer than probably anyone gets their own month that's all about them?

7:35: Are you speaking from experience? Inquiring minds want to know!

StupidDave when people get beat up, even killed, for being heterosexual then we can have a whole month for them.

Your friend, Mark Squitiro convinced our mother that I was gay when I was only 13 because he said he noticed that I didn't brag about the girls I had sex with. I was only 13, & wore glasses that looked like the bottom of coke bottles. We call such glasses BC, short for birth control.

This didn't make me gay, or even hate gays, it just made me hate my mother & brother. To me gays were the victims of bullies, too, & therefore my allies. This is why I consider blacks my allies, too.

Did your mother say to you, "I'm concerned you might be heterosexual because you don't brag about sucking dicks."

Gays don't want extra rights, they want the same rights as everyone else, & I don't want any other 13 year old boy to have to apologize for being a virgin.

Christians discriminate against gays because of one of the lines from The Bible that they've cherry picked. Everyone knows there are many lines that they ignore.

The bottom line: It's about freedom, being free from bullying.

When did they drop the first word from "Gay Pride Month?" It must not have focus grouped very well. Trying to sell a product to a public who wants no part of it is difficult. Changing Gay Pride into just Pride is an obvious and unsuccessful attempt at rebranding. Put lipstick on a pig, it's still a pig.

Byron you stupid fucker gays have the same rights as others. It's only when they demand more that they get pushed away and then want to yell discrimination.

Dave is very right and you are very wrong again as usual.

I have never as you might say bullied a gay person who didn't first invade my space screaming their crap upon me.

So "FUCK YOU BYRON" along with all your hateful shit you spew.

^^^^I'll believe this when you feel the need to take the photos of your wife and little contributions to society off your desk.

As we've discussed before, the term "LGBTQ" was purposely fabricated to give the false impression that it's representative of a large segment of the population. It's not.

Case in point, what's the difference between Lesbian, Gay, and Queer, 3 of the 5 letters in the acronym? They all refer to homosexuals. Bisexuals are homosexuals who haven't fully accepted their homosexuality yet. Transgenders are such a tiny fragment of the population (a small fraction of 1-percent) that it's not statistically significant.

So here we are in 2019, and dysfunctional urban centers led by politically liberal Democratic panderers are promoting a "Pridefest" for a segment of the population that represents at most 4 to 5 percent of the total population.

Specifically in KCMO, recall that Mayor Sylvester's son (from his failed 1st marriage; now deceased) was homosexual and estranged from Sylvester his adult life. Council member Jolie Justus is on her 3rd marriage (2nd same-sex marriage) and if elected Mayor will certainly continue promoting such silly schemes as segregated festivals.

To put it into perspective, consider the following groups and ask yourself if they hold a celebratory public festival:

VISUALLY IMPAIRED - 2.4 percent of Americans
The number of non-institutionalized, male or female, ages sixteen through seventy-five +, all races, regardless of ethnicity, with all education levels in the United States reported to have a visual disability in 2016.

CELIAC DISEASE - 1.0 percent of Americans
An inherited autoimmune disorder that affects the digestive process of the small intestine. When a person who has celiac disease consumes gluten, a protein found in wheat, rye and barley, the individual’s immune system responds by attacking the small intestine and inhibiting the absorption of important nutrients into the body.

GENITAL HERPES - 12.5 percent
About one in eight people ages 14-49 in the United States have genital HSV-2 infection.

I do like the sound of "Herpes Pride Day".

And 10:28: go and fuck yourself.
You stupid fruits always say, "If you don't like gays then you must be a closeted gay." BULLSHIT!
I am a snatch man all the way. First fag that suggests anything else gets a rearranged face.

7:10 is right. Corporations have really seized on the gay thing for marketing and income. It’s only a matter of time before a trans or LGBTQ holiday is shouted and demanded for. They want everyone to say: “happy lgbtq day everyone”!

A month is a bit much. Thankfully it's not official, just the same old people trying to hijack the city's agenda for their own means.

Any chance we can cut the "Evangelical Hatemongers" back to just one "Special" month, rather than letting them rant and rave all year round?

10:38 is a closeted gay. Why else would he be commenting on a thread about gay pride?

^^^^ I believe that you just validated the point that he/she was trying to make.

Byron, we know you're not gay.

Do the white stars represent white people? White is the combination of all colors of the spectrum.

Yes. He's the therapist your ex-boyfriend's successful conversion was guided by.