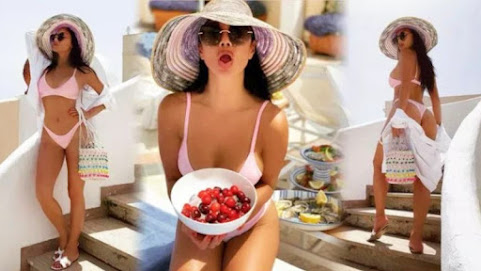 40 isn't old by any stretch of the imagination, unless we're talking about the entertainment industry, sports, news and just about every aspect of American pop culture. Accordingly, here's a bit of encouragement for hotties offering up their goodies at an advanced age . . .

DM: Nicole Scherzinger, 40, displays her ample assets in a skimpy pink bikini as she enjoys a sun-soaked Italian break

New York: Where Are All the Books About Menopause?

Closer to home, these are the news links we're watching right now . . .


A Timeless Backyard Wedding at the Bride's Childhood Home in Kansas City, Kansas

Meaningful locations have played a large role in Margaret "Maggie" Newell and Griffin "Tucker" Hawkinson's relationship.The couple first met at an iconic University of Kansas bar, the Wagon Wheel Café, as students (and neighbors!) at KU. After nearly six years of dating, Griffin selected another special spot-Maggie's favorite place in Vail, Colorado -to propose to his college sweetheart.

Nicky Lopez was a player many Royals fans were talking about going into this season. MLB Pipeline had him as the Royals #8 prospect, John Sickles had him at #7. At Age 24, he hit .333 in Spring Training, and easily made the case that he should break camp with the Royals.

KANSAS CITY, KS (KCTV) -- Two people were wounded in a drive-by shooting early Thursday morning. It happened about 2 a.m. in the 1300 block of North Fifth Street. Police Chief Terry Zeigler said one victim suffered life-threatening injuries. We are working to find out if police have a shooter in custody and what may have led up to this.

Patrick Mahomes continues to be the toast of the sports world.ESPN announced Wednesday the nominees for the 2019 ESPYS, and Mahomes - the Kansas City Chiefs' star quarterback and reigning NFL MVP - is up for two awards.Mahomes is up for Best Male Athlete and Best NFL Player and the Chiefs are up for Best Game against the Los Angeles Rams on Monday Night Football in Week 11.In the Best Male Athlete category, Mahomes was nominated along with baseball star Mookie Betts, NBA star Giannis Antetokounmpo and PGA golfer Brooks Koepka.

KANSAS CITY, MO - Russell Stover is a sponsored advertiser of Kansas City Live and is responsible for this content. Russell Stover has been making delicious, world-famous chocolates and candies since 1923, and now they are bringing their treats to the streets of Kansas City.

This is just about normal for this time of year.

The Best of Killa' Shitty

I see that the public library opened at 9:30 this morning.
Sperger boy is hard at work trying to, unsuccessfully, fit into the human race.

None of that shit was news

Quick to anger, ADHD, accute anxiety, and the list is long said...

Sad. Bad. Assbugger syndrome causes 10:14 to talk to himself when he's triggered!