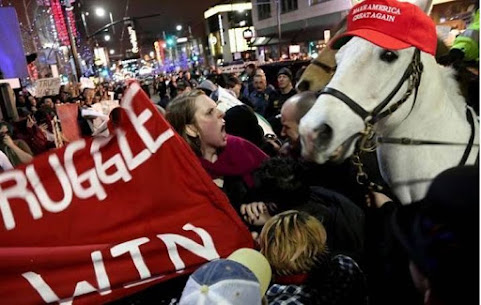 Amid budget concerns there was an outpouring of support and advocacy for this effort that is both crowd control and community outreach for Kansas City police.

Tonight, here's a preview of a decision on the fate of horses in the streets . . .

In April, Kansas City Police Chief Rick Smith said that he was considering disbanding the unit to make way for more officers on the street. He is expected to announce on Tuesday that the Mounted Patrol will stay in place, but a few changes will be made.“They want the Mounted (Patrol) to be more involved, more aggressive, let’s say, in controlling crime," said AliceLee Hollister, chair of the Friends of the KC Mounted Patrol.

much needed for crowd control. The 2020 election will see a lot more protests.

I support Dan the horse said...

Overall I think this is a good thing. But KCPD needs to start thinking about more efficiencies for the future. While we need Crime Control there has to be a new effort to find the most cost-effective solution. Horses are something from the 1900s that police used. You can't tell me that there isn't a better way to try and get unruly mobs into order. The problem is is that a lot of people are scared of the new technology but in the end it's saves everyone money.

Arm the horses and put them in shools

Only facists support mounted patrol. Cruel to animals, cruel to humans and just a publicity stunt for police. Does not help prevent crime.

If protesters don't want a hoof on their ass maybe they will obey the rules and behave peacefully.

Should we start thinking about police dogs for crowd control? Repurposing?

Good move for a police. I want to see how the Chief is going to change the program. I think it's obvious that people love the horses and want to see more of them on local streets. They have helped the Plaza control crowds and not everyone thinks they are a bad thing. A lot of us appreciate the protection they provide.

I think the community outreach portion of this decision is being overlooked. People love the horses and they like seeing them on the streets to interact with people and show us that our city has the confidence to maintain this kind of program. I hope the Chief keeps the program at the current level it is a great example that our city honors our police and respects our traditions.

^^And, rubber bullets, tasers, big armoured sh*t that mows 'em the f*ck down! What are they saying in the tac teams from the decoy spotter vehicles, up in the snipers' posts, and in the popo SUVs: "Resist this, mofos!" Or: "Punks in handcuffs!" "Cry for your mama!" Plus: "Yo, jailbirds!" "No, pleas!"