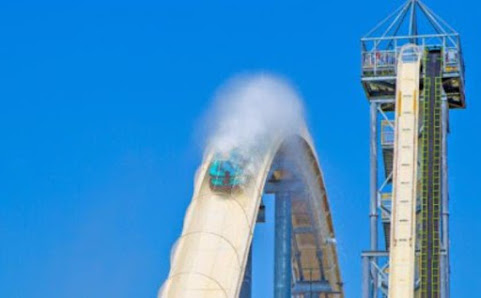 What might be the new boss of a formerly popular KCK water park has operated much safer local facilities that gives this location a glimmer of hope for new management as a tragic The Dotte development now changes hands for pennies on the dollar following one of the most horrific water park tragedies the metro has ever endured.

Remember that the youngster's head torn off in plain view of hundreds was so nightmarish that Kansas City newsies wouldn't dare mention it for weeks despite the demand for the facts from our blog community.

And now the DECAPITATION legacy needs to be mentioned not only to pay tribute to the memory of poor Caleb Schwab so that his horrific demise might save others given that this episode painfully taught us that not all water park owners know what they're doing and safety at these places is often sketchy at best.

KC Biz Journal: KCK's Schlitterbahn may have found its next owner

Schlitterbahn Waterpark's Kansas City, Kan., facility still hasn't opened for the summer, leaving its fate up in the air. But a new definitive agreement could make Cedar Fair Entertainment Co. its next owner. The Ohio-based operator of amusement and water parks and immersive entertainment already operates two area facilities: Worlds of Fun and Oceans of Fun in Kansas City.

KCK should not allow this to happen. That development needs to be razed. KCK leaders got duped the first time.

Please, sell quick and get a new name! said...

Fox 4 covered this briefly 40 minutes ago. Alford opined there's a big stigma associated with the KCK Schlitterbahn due to Caleb Schwab's death. He says if it sells and opens again, renaming it seems reasonable and necessary. Agreed. Maybe there's some image adversity, but the source of the fatal accident, Verruckt, is gone now.

People still travel via airplanes knowing there's been operational and mechanical failures that caused deaths. People continue to buy and ride in cars knowing lemon parts could result in danger and recalls. Those MILLIONS of bad accidents resulting in serious injuries and deaths from the BILLIONS of faulty components on vehicles HASN'T STIGMATIZED FORD, GM, JEEP, TOYOTA, VOLKSWAGEN, ETC., TO THE POINT OF FORCED SHUT DOWNS!!!

There are good reasons for the Dotte park to get opened again, and soon. The resources already expended for this park should not be squandered. Revenues are needed in KCK, including utilities, tax collections, deliveries, maintenance, supplies purchased, food sales, and MORE. Jobs are desired in all parts of the Dotte, and this waterpark supplied some. Employment gained back would be beneficial, especially for teens who desire summer work only, and some who desire seasonal second jobs. I have family, know of neighbors' teens, and have parish friends who fit those motivations for having their positions at the waterpark.

Aawww, the assbugger syndrome buttboi is so bigly triggered. Too many words to read right now, widdle wimp? Better get that adderall Rx refilled. Or, check if your buttbuddy at your usual BathHouse will share his.

they bought the other two for $261M combined and have an option to buy the KCK location for $6M? damn, I understand the other two are well established and up and running but that seems like a steal at $6M. Shut it down for this year and reinvest in upgrades, etc. and reopen next year under a different name and the park should do just fine.