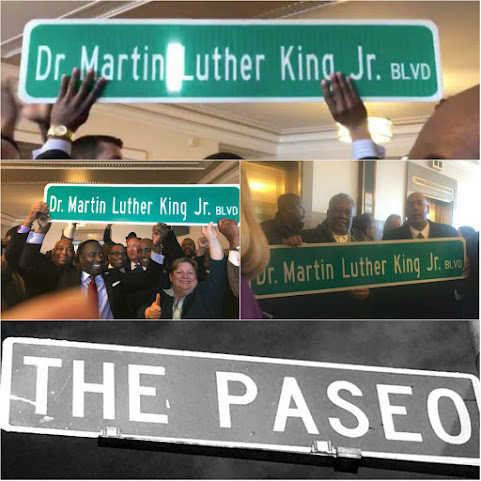 There was a promise that the name change of this KCMO Blvd would spark economic growth and vibrancy, instead we've only seen confusion as newsies don't really know what to call the street amid the many shootings along the route. Nevertheless, as the name of this controversial road will soon be determined by voters, here's a glimpse of real life near the embattled stretch of East Side road:

Police said the shooting happened just after 5:30 p.m. Friday near 83rd Street and the Paseo. Officials said the victims showed up at a local hospital.

It’s not clear at this time how severe the other two victims’ injuries are, according to officials.

3 injured in triple shooting at 83rd, The Paseo

KANSAS CITY, MO (KCTV) -- Three people were hit by gunfire in a triple shooting in Kansas City on Friday evening. The shooting happened in the are of E. 83rd Street and The Paseo at about 5:40 p.m. Three people were injured. For one person, those injuries are life-threatening.

Cut out the middleman and just call it murder row.

What can we give the blacks that will make them shoot each other more? Mlk street, check. Free gubmint money, check. Free schools, check. Free transportation, check. Free laundry, food and daycare, check. We need to give them more free stuff so they’ll step up their game, I mean, they don’t have to do anything to get paid, you’d think with all this free time they could should be better than this, it’s disappointing really.

He did forget free housing though! Hahahahaha!

They are the last 3 pieces of chicken

The cops will catch whoever did this and Jean Petersucker Baker will let them plead down to simple assault with some very tough unsupoprobation.

Death comes for all of us. Does it matter if it is untimely?

So a MAGA brother

11:17 oh jeez, bLIEron has sex with his mother and sister, that’s just disgusting, wait, what? His father and brothers too? That’s one messed up dude right there.

No one hates Jean Baker.

Under her crime has rose in Jackson County turning this area into one of the most dangerous cities in the country. Someone needs to be held accountable for that. Baker, Forte and sLIE James are the three biggest people responsible for the growing daily police blotter's around the metro.

By the way Byron. You seem to be a big fan of Baker. But didn't you hate her guts when he tried to railroad that poor guy in Maryville and came up empty?

I wonder what would happen if you gave out free phones but then every 4th or 5th give out the newest apple phone.....