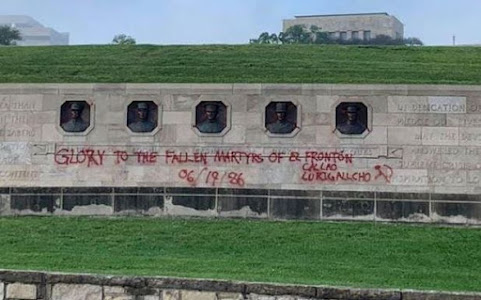 This one requires a bit of objectivity to report the facts accurately, instead, most Kansas City newsies are taking the story at face value.

This is the same group that joins typically milquetoast Democratic Party protests around town to push voters further left.

It's a loose affiliation and their tactics have garnered public recognition since a Molotov cocktail was thrown at Congressman Cleaver's office.

Vandals marked on the wall of the Liberty Memorial in red paint under the busts of soldiers.

“Glory to the fallen martyrs of El Frontòn, Callao, Lurigallcho- 6/19/86,” the graffiti reads. On the right side of the writing there is what appears to be a crudely painted sickle and hammer, the symbol of proletarian solidarity first adopted by the USSR.

KCPD Chief: Defacement of Liberty Memorial and other buildings will not be tolerated

The talk about old school International events is a red herring.

The handwriting is easy to recognize.

THIS BREAKING NEWS GRAFFITI IS THE  WORK OF ANARCHISTS, COMMUNISTS & ANTIFA ANNOUNCING THEIR LOCAL PRESENCE ON KCMO ELECTION DAY!!!

TKC stopped believing in ANYTHING a long time ago so it's easier to provide our readers a dispassionate analysis of this publicity stunt rather than accept a PR line from either police or commies. As is always the case when voters head to the ballot box, this public demonstration is nothing more or less than a struggle for power from another faction.

There has to be a lot of security footage in that corridor. Seems like a dumb move.

Don't forget, this is right next to the upcoming streetcar extension. I guess they'll have more access to KC when the folly trolley new tracks are established.

Can we put these guys and the "We will not be replaced by Jews" guys in a room and just have them duke it out to the death?

Word on the street is that Jolie's team is behind this...

Those are the local democrat activists. They were up early for GOTV.

Fake news. Done by the right. False flag. You know, just like the child pornography gathered at INFOWARS. Right?

It might help their cause if anyone knew what the fuck they were talking about,in their graffiti scrawl.

It is obvious that homosexuals are responsible for this. So dramatic, only a flaming faggot could think this up.

This is typical democrats.

Thanks and special Kudos to KC Star for sharing this with the messages posted illegally on the memorial.
They are helping the perps by giving them a bigger voice.
How pathetically dumb are they?
At least Darwin is taking place as they have no sustainable biz. model.
Trump 2020, 2024, 2028.

Hey, I know, "Hamilton" has some rabid SJW types associated with it.....Hmmmmmm said...

Bet the thugly f*cktards get nabbed. This zone is surveilled bigly, with layers of security for the federal and private property interests very near. South 2 blocks is the Federal Reserve, across the street is Union Station, and within another few blocks are the hotel suites that are reserved by high level public and private concerns from across the globe.

Agree about the obscure reference, it seems like an inside joke to me. I wish they had the courage to become drug dealers like everybody else.

Politics brings out the worst in people.

^^^ I think you got that backwards, the worst people come out for politics.

Wish these guys would protest and exercise their free speech rather than destroying property that little old grandmas will have to pay to update. That's tax money that will be require for the fix and it comes from KCMO. I know we spend on a lot of other garbage but this is just senseless. Wave a sign, make a banner but don't make poor people pay your bills.

But the Alex Jones reference is priceless. That dude is in big trouble.

Hope they find these mulatto commie cocksuckers and they resist, forcing the cops to shoot them both to death.

Those bitches were white. Probably your grandkids.

why are you randomly blaming Antifa?

Alex Jones is a pervert. You know it, I know it, we all know it.

Antifa is a bunch of clueless idiots that bLIEron adores, why attack a priceless memorial? Because they are paid chumps for the dummocucks that’s why.

^^^Easy mee maw... if you weren't such a loser, maybe you could check in with your grandkids? They likely did it.

White Hispanic! Yeah, that's it! The vandals are two brothers (not as in black bros, the kin kind) and they wore red MAGA hats during the monument graffiti attack! Plus, they were hired by a race-hoaxer/sympathy baiter/homo/Hollyweirdo to stage a Peruvian link. Likely just loco locals.

12:49 please kill yourself. They are most assuredly a muddy brown color and chock full of lefty antifa ideology.