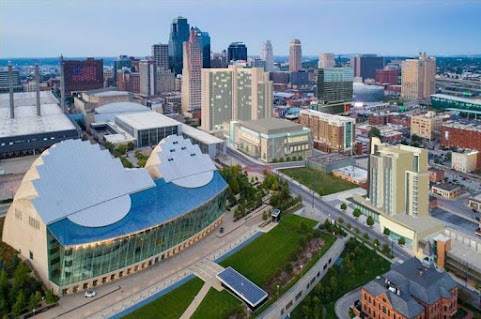 A pause and punt for today with the hope that VOTERS FORGET PROMISES TO FOCUS ON NEIGHBORHOODS AFTER THE ELECTION and the gravy train inside the loop keeps on running long after the plebs have cast their ballot.

Remember that both candidates have supported corporate welfare for developers after making agonizing speeches and pushing for a few caveats along with legislation that can be easily outmanuvered by emergency ordinance.

Despite the glut of downtown hotels, don't be surprised if this one earns at least some of the big bucks that it's asking if only because the location is nice AND everybody else has had a turn.

Here's a quick update and a reminder that Democracy is just one of many obstacles facing successful businessmen . . .

A Kansas City incentive-granting body opted to delay a vote that could grant incentives to a $63 million plan to construct a luxury hotel near the Kauffman Center for the Performing Arts. It likely won't be voted on by the current City Council and instead would be an issue the next City Council would face shortly after their term begins.

The delay came nearly a month after the Tax Increment Financing Commission originally heard the proposal for the hotel, which requested a 75% tax abatement for 23 years, among other incentives. At the time, the request was continued until this month's meeting.

“The public assistance requested represents more than $56 million over the life of those TIFs and about 38% of the project's total costs, according to SB Friedman's report. The analysts said that, in Kansas City and across the Midwest, public assistance makes up between 10% and 15% of a project's total cost, on average.”
Absolutely ridiculous. And in 23 years, when the corporate welfare stops, it will be just another outdated venue. Not to mention, KC has hosted presidents and all sorts of celebrities and none of them was ruined by having to stay in a 4 star hotel.

Probably because they know the 50% cap won't pass, or because the Council will overturn it.

^^^ @7:29 nailed it!
Expect the outgoing Mayor and Council to overturn the 50% TIF Cap AND grant this Developer their request, both decisions are with profitable benefits to the Council members and without consequences to them personally.

TIF is not a bad thing itself it is when abused it is bad. Bogus blight study. Right across from the gorgeous Kaufman center, no way it's blighted. Head to east 9th or 12th and find blight galore but not here.

Just another KC ripoff. NO THANKS!

There are too many hotels downtown in the first place. If these guys can raise the money on their own, they are welcomed to do so. But KC does not need to keep financing into a glutted marketplace, that is a recipe for disaster.

No problem considering our 24 million annual visitors. With Las Vegas sitting at only 40 million per year, we're well on our way to becoming America's vacation capital and we're gonna need at least another dozen or so downtown hotels.

This place has a chance at being profitable if recreational weed and prostitution are legalized.