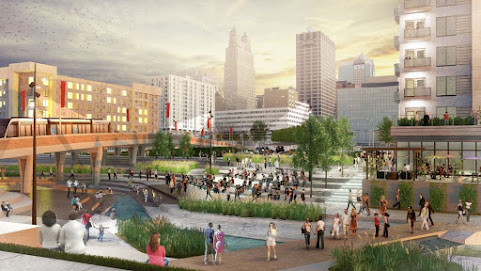 In a recent poll, just 51% of Americans said they have faith in the country's democracy, and 37% say they have lost faith in democracy whereas about 10% were smart enough to admit NEVER having much faith in the first place.

Locally, this applies to Question 1 that's more of a referendum on the focus of City Hall on Downtown development.

Still readers deserve to be accurately informed that the legislation language is a bad joke.

Here's a pretty good MSM roundup of the ballot item . . .

KANSAS CITY, Mo. - Voters Tuesday will decide whether Kansas City, Missouri should cap the amount of property tax discounts it can offer developers to lure their projects to the city. Question 1 asks voters to set a cap on how much of an exemption the city can give developers on their property taxes at 50 percent.

If voters want the downtown gravy train to keep running with hope that promises for jobs & tax revenue are eventually fulfilled. Vote NO.

Vote YES to send a message that taxpayer cash to developers must be limited.

But advocates for the legislation understand that this initiative is made out of Swiss cheese and could be easily carved up by even the worst among local development lawyers who power their career by moderate to heavy cocaine use and expensive cocktails at new upscale downtown bars.

If Question 1 is rejected and NO VOTES WIN then advocates for limiting tax incentives earn a major rebuke and avenues for future reform will be more challenging.

If Question 1 is approved and YES VOTES WIN then life gets a little tougher for developers who will have an extra hurdle to cross before earning access to City Hall coffers.

Polling suggests that YES on Question 1 has the advantage right now.

Vote maybe and you get a free ride on the choo choo.

If the Council can just ignore the City Charter, there's not much hope for initiatives either.

We're quite aware that the current Mayor and Council plan a fury of TIF Grants and Tax Dollar handouts starting immediately after the Election, ignoring anything the voters do or say, just as they have for eight years.

BUT, voting "Yes" on Question 1 is still the only way to make that quaint nd irrelevant (to them) thing known as "THE WILL OF THE PEOPLE" plain.

As least none of the venal shits will be able to hide behind the fiction that they are acting in any fashion other than Pure, Unadulterated Greed.

Vote NO if ya like Killa Shitty murder momentum national rank at #5 and the national rank within top ten for a debtbomb. NO votes keeps the wealthy cronies grabbing ever deeper into taxpayers' pockets. Those blingy thingy fancy frosty toy trains--convention hotels--airports--art shows--and more momentum by the million$ IS NOT CHEAP!

Didn't they say on the KMBC debate that even if you vote YES/to cap at 50%, that the council can make exceptions?????????

And as an earlier commenter noted, I would expect a FLURRY (not a fury) of rush TIF projects in the few weeks before any new cap would take effect.

Think of the cash that will flow during the last scheduled flight of the Gravy Train Express! Ticker tape parade for John Petersen at Polsinelli, perhaps? Who else??

How does one get information on all the judges to make a stab at being informed?

Surely the current Mayor and Council will not plan a flurry of TIF Grants and Tax Dollar handouts starting immediately after the election especially since a TKC kick ass city insider has informed TKC the city has no money as noted in an earlier TKC post.

The TIF money is for downtown not for the neighborhoods, like the Northland needs a new shopping center or Hotel. Where are the sidewalks to schools ? faster response time for police and Fire ? Bulky item pick 0up ? the list goes on.

KCMO use your feet to vote, move.