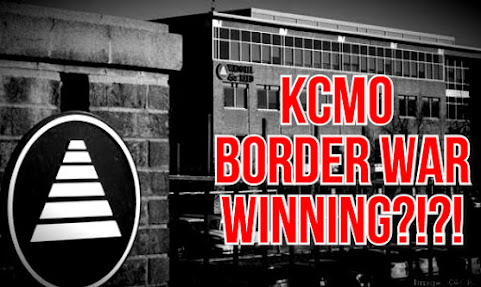 Today we learn of a potential cowtown big money victory as one of the biggest local firms in the metro reveals their plan to switch to the Missouri side and, likely, set up shop in Kansas City proper.

Overland Park-based Waddell & Reed Financial Inc. announced Wednesday that it has completed a review of its real estate needs and is looking at options for a new corporate office.

“After reviewing numerous locations across the Kansas City metro area, the company is now considering a number of potential sites in Missouri,” the release said . . .

Waddell & Reed currently is based in several low-slung buildings near the corner of 63rd Street and Lamar Avenue. A move could allow the company to consolidate its employees in a single location. A move to Missouri also could allow Waddell & Reed to receive sizable development incentives form the state and city agencies.
#########

Sadly, this kind of switcheroo is often criticized by pundits as a failure to create real economic growth and merely benefit big biz.

And so despite promises from metro, Missouri & Kansas officials, the "economic border war" is yet another local conflict that remains unresolved as we head into election season.

The residents will likely stay in Johnson County. So this is actually, just a big victory for the KC earnings tax.

but we still aren't bringing any new businesses to the metro.

Does it say where the new location is? I'm using an adblocker and it won't let me read the article

Thrilling just what we need. More stuff like this.

Apr 17, 2019 - Waddell & Reed Financial Inc. agreed to pay $4.88 million to settle a class action lawsuit filed against it by a former employee.

Read the fine print. They're interested in KCMO for the subsidies. Buying friends is never a good policy.

This is really a loss for both sides of the community because it shows a corporation basically just milking subsidies rather than creating new jobs.

KC taxpayers are the losers. What they want is for taxpayers to subsidize their business and get free government services. Stay in Kansas.

Another gift from Mayor Sly James to his friends. Must be nice.

Wadell & Reed is bigger but there are better newer businesses moving into Johnson County. This is nothing but an insider deal. If I was a stock holder I think this would suggest that the company is getting desperate and doesn't really care about their employees. Just think about how much extra a year in earnings taxes it will cost them. Wadell & Reed just docked all of their staff. That can't be good for morale.

8:30, Did you mean Corporate? Drink one more and the head to bed dumbass

Any tax subsidies will just transfer earnings tax paid by JoCo residents back to Waddell & Reed, while KCMO taxpayers will have to pay for police and fire protection at the new building, The “professionals” running KCMO are either idiots or on the take from Greater KC Chamber boys who live in JoCo.

Wanna know another reason?
Could it be because of all the ticket writing for revenue enhancement and employees begged to get out of busslhsit city officials?

^^^^^ Good call. JoCo police won't let people drive. Stay out of there if you don't have a lawyer on speed dial.

Waddell and Reed is a faded entity. They jettisoned the ceo for low returns.

Where is the Chamber in terms of weighing in on stupid incentives that
hurt our city. Probably slapping backs with some insiders who are in on
the deal. Bad for business, and not representing the interests of the
community.

Punish every entity associated with this kind of manipulation. Meanwhile it
distracts from serious priorities.

This is a failure of the political class of greater Kansas City, and their bosses, the public.

Keep Waddel on Reed on your side of the state line, we have enough corruption on our side of the line! We have the KCFD fire Department, and their public saftey scam has kicked our ass over here, They "waddel" enough when answering a 911 call or trying to save a life without proving a value to us tax payers!!!! As far as "reed" goes who cares keep your corruption in Kansas, we are all full up here in Missouri!!

Waddell & Reed would be a big win for KCMO! Even better if they would locate downtown and help spark the downtown office market. The more business in KCMO, the better. When a bunch of Missouri residents work in Kansas, that's where their tax dollars go. Your tax dollars go primarily where you work. It's never a good idea to have all your residents going to work in another state.