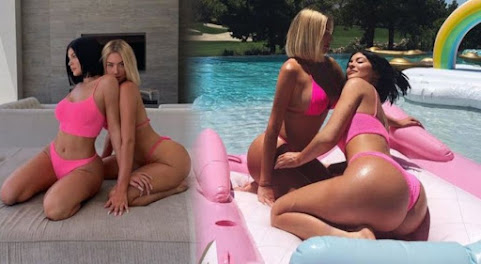 Once again we note that pop culture Kylie hotness has broader implications AND bikini pix. Checkit:

Save The Planet In Style

OLATHE, Kan. - From windows that block sun rays, to geothermal cooling and recycled countertops, one house in Olathe, Kansas, aims to be energy efficient in every way possible. Now the house at 27349 W. 108 th Street is for sale for $1.675 million.

Banking as a mom-and-pop CBD shop can be treacherous, said Kyle Steppe. "Our first week in business, our bank shut us down and liquidated all of our assets," said Steppe, who operates with his wife, Heather.


NFLer Aldon Smith arrested on suspicion of DUI in Mission

KANSAS CITY, Mo. - NFL player and former University of Missouri football player Aldon Smith was arrested early Tuesday morning in Mission on suspicion of DUI. A spokesperson with the Mission Police Department said an officer observed a car speeding and committing a lane violation around midnight.

Soldiers Stand Up To D.C.


Storms heading for Kansas City Tuesday, with more on the way this weekend

Ever heard of the term 'supercell' but didn't know what it was? Learn about these powerful storms responsible for most tornadoes in the United States and other thunderstorms in this video from NWS. The brief dry spell that has given Kansas City such mild weather in recent days will come to an end as storms return Tuesday night.

KANSAS CITY, MO (KCTV) -- Chiefs star Defensive tackle Chris Jones has not shown up for minicamp with the Kansas City Chiefs, a report says. NFL Insider Ian Rapoport sent out in a tweet: Chiefs star DT Chris Jones, whose contract negotiations have stalled, is not present with the team today and not expected to be at minicamp, sources say.

"Our first week in business" the bank seized and liquidated all their assets? I don't think so. The biggest illegal activity in that article is saying the bank somehow assumed the power of the judiciary and forced asset possession and liquidation? I would suspect the truth is somewhere significantly closer to: the bank called our overdue note and we sold stuff to pay it off before they foreclosed on our other stuff. That is nowhere near the bank seizing and liquidating assets. I have a $16k personal load with a bank, i.e. unsecured. If that board all of a sudden said "anonymous, we need our money in 30 days" I would sell or try to move other assets to keep them on my side. Then again, I've never been late on a payment so there would be no reason to call that note. Banks don't care unless they aren't getting the bucks.

^^^Your insistence on "truth" and "accuracy" in woke journalism clearly marks you as part of the cis-gendered white male oppressor class!

It's a whacked out world for a white guy about now! said...

^^LOL! Serious, now. Posts like yours are a valuable public service! The salt-of-the-earth, intelligent Great Americans will agree, you tinged it in snark, while flashing in bright neon lights: YOU IDJITS AIN'T GETTING THE REST OF US TO BUY YOUR TOPSY TURVY TRASH YOU CALL MAY CALL TRUTH!

Who would have ever imagined that the words "mansion" and "Olathe" would appear in the same sentence?
Please note that "Olathe" means double-wide in the local Native American dialect.
Ask Sharice Davids!
Hahahahahaha!!!

Okay, you're on to something for most of Olathe being Cracker Corner trailer park over there in southeast JoCo. But there's a pocket, or two, of uppity-scale golf course communities up in northwest Olathe near the Lenexa city limits. That original part of Cedar Creek is full of palefaces' very large ponderosas, with big blingy stagecoaches at the ready, right by fancy fountains in circle driveways.

Aldon Smith has some issues. I'm surprised the dude is still allowed to drive a car anywhere.